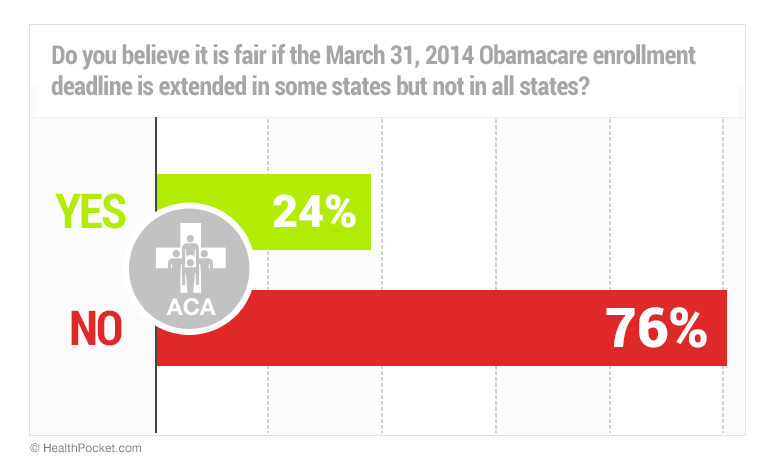 The conclusion of the Affordable Care Act’s initial Open Enrollment Period was originally scheduled for March 31, 2014.1 After this date, consumers would no longer be able to enroll in Qualified Health Plans until the beginning of the next annual enrollment period.2 This time between enrollment periods is known as the “lock-out period.” For those uninsured consumers entering the lock-out period, the earliest insurance coverage can become active is January 1, 2015. In the pre-reform individual health insurance market, consumers could enroll or switch health plans throughout the year but their applications faced the prospect of medical underwriting where applicants could be rejected due to certain pre-existing conditions or health problems.3

The White House announced on Wednesday, March 26th that consumers who began an enrollment application by March 31st on the federal exchange web site would have until mid-April to complete the enrollment process.4 Electronic verification of an initiated online application is not required. Instead, consumers desiring this extension must check a blue box on Healthcare.gov.5 The lack of verification of application creation dates effectively provides a blanket enrollment extension for all residents of those states who use the Healthcre.gov web site for their health insurance exchange.

For those states who utilize their own exchange website (as opposed to Healthcare.gov), there are a variety of different dates that mark the conclusion of the Open Enrollment Period. The end of enrollment differs by up to 3 months among states, with differing rules regarding what circumstances justify an enrollment extension. Connecticut, for example, has retained the original March 31st deadline while Massachusetts has a deadline of June 30 to switch to a qualified health plan if the resident was enrolled in a temporary state-run health plan due to an earlier application processing delay. In Nevada, any resident who tries to sign up by March 31st using Nevada Health Link and fails will have an additional sixty days to complete the process. For residents of Washington, D.C., people who have an online account on the DC Health Link web site, but have not yet selected a plan, will be able to enroll through April 15, 2014. The April 15th deadline will also apply to D.C. residents who need in-person or telephone assistance.

Those uninsured citizens who fail to enroll face a penalty of 1% of adjusted gross annual income or $95, whichever amount is larger.7 As mentioned previously, people in the individual health insurance market who fail to enroll by the end of the Open Enrollment Period will be locked out of Qualified Health Plans (unless they have a special life event that triggers a Special Enrollment Period). An individual locked out of the individual insurance market does have the option to obtain short-term health insurance but faces medical underwriting during the application process. However, short-term insurance does not meet Affordable Care Act standards and, therefore, enrollees would still face the uninsured penalty.

Because of the evolving situation, HealthPocket is monitoring the states for any additional open enrollment updates to their Open Enrollment Periods.

Results are based on 1,307 responses to a nationwide online survey conducted from March 26, 2014 to March 28, 2014. Respondents were asked, “Do you believe it is fair if the March 31, 2014 Obamacare enrollment deadline is extended in some states but not in all states?” Respondents had the option of selecting one of the following answers: “Yes, it's fair to have different deadlines” or “No, it's unfair to have different deadlines.” The answer options were displayed in fixed order. The survey was displayed within a network of over 100 different news web sites and other content sites. Demographic inferencing and methodology to acquire survey respondents who approximate national statistics on age, gender, income, and region was performed by Google-administered technology. Race, education, and health insurance status were not examined. Margin of error across survey responses is estimated at +2.4/-2.4.

1 What key dates do I need to know? - HealthCare.gov https://www.healthcare.gov/what-key-dates-do-i-need-to-know/
2 Exceptions would be made in special life events such as the birth of a baby or getting married. See “How can I get coverage outside of open enrollment?” https://www.healthcare.gov/how-can-i-get-coverage-outside-of-open-enrollment/. See also “Guidance for Issuers on Special Enrollment Periods for Complex Cases in the Federally - facilitated Marketplace after the Initial Open Enrollment Period.” Centers for Medicare & Medicaid Services (March 26, 2014). http://cms.gov/cciio/resources/regulations-and-guidance/downloads/complex-cases-sep-3-26-2014.pdf
3 Kev Coleman. “Health Insurance Application Rejection Rates Rising?” HealthPocket.com (January 24, 2014). /healthcare-research/infostat/health-insurance-application-rejection-rates
4 Amy Goldstein. “Obama administration will allow more time to enroll in health care on federal marketplace” Washington Post. (March 25, 2014). http://www.washingtonpost.com/national/health-science/obama-administration-will-allow-more-time-to-enroll-in-health-care-on-federal-marketplace/2014/03/25/d0458338-b449-11e3-8cb6-284052554d74_story.html
5 Ibid.
6 Kev Coleman. “Obamacare Open Enrollment Ends March 31st Despite Public Support for Extension.” HealthPocket.com (March 7, 2014). /healthcare-research/surveys/obamacare-open-enrollment-period
7 “What if someone doesn't have health coverage in 2014?” https://www.healthcare.gov/what-if-i-dont-have-health-coverage/