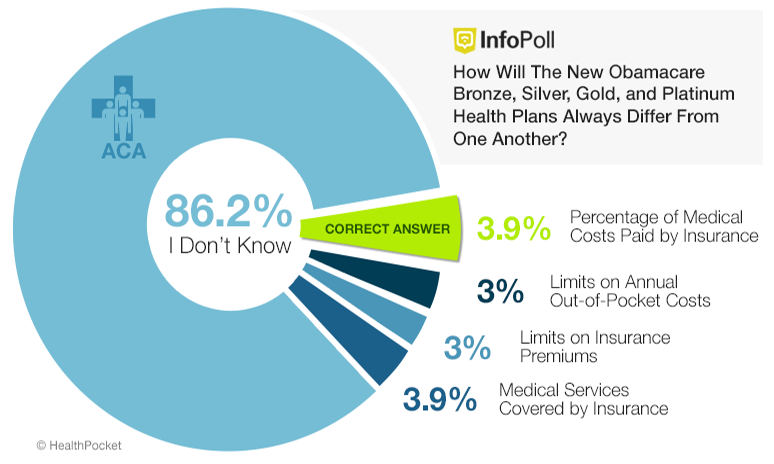 When asked how the new Affordable Care Act health plans will differ from one another, nearly nine out of ten people surveyed in HealthPocket’s new InfoPoll responded “I don’t know.” This lack of consumer awareness about one of the most basic aspects of the Affordable Care Act is a striking demonstration of the education challenge ahead as consumers face new health plan choices starting on October 1, 2013. The survey results suggest that the Act’s pending impact to the health insurance market is still a mystery to the average American.

The Affordable Care Act creates four basic health plan designs to address the needs of most shoppers who are not enrolled in a grandfathered health plan, Medicaid, or Medicare. These plans are designated the Bronze Plan, the Silver Plan, the Gold Plan, and the Platinum Plan. All plans will share a mandatory set of insurance coverage features known as the Essential Health Benefits. The new plans differ from one another based on the percentage of medical expenses paid by the insurance plan. The Bronze plan, for example, will pay 60% of covered health expenses for a typical population with the remainder of the costs to be paid by the plan enrollee. The Silver Plan, in contrast, will pay 70% of these expenses, the Gold Plan 80%, and the Platinum Plan 90% of these expenses. Only 4% of 913 InfoPoll respondents could correctly identify these differences in medical costs paid by insurance as the feature always distinguishing the new Affordable Care Act plans from one another.

Another 4% of InfoPoll respondents thought that the new Affordable Care Act health plans would always differ from one another based on the medical services they cover. While some new health plans may offer additional benefits beyond the Essential Health Benefits mandated by law, they are not required to do so and any extra benefits will not change a plan’s definition as a Bronze, Silver, Gold, or Platinum Plan. Additionally, some industry analysts also believe that most new health plans will be unlikely to expand benefits given that they will already have to expand coverage just to meet the Essential Health Benefit standards.

3% of InfoPoll respondents believed the new plans would vary from one another by differing limits on insurance premiums and another 3% believed the limits on annual out-of-pocket costs would be the distinguishing characteristic among the new plans. While the Bronze, Silver, Gold, and Platinum plans are not limited in what they might charge, they all will be limited to twenty percent of the premium going to overhead and other costs not related to health claims. Their rates can also be submitted to a formal rate review. For those individuals qualifying for subsidies, there will be a limit on how much of their household income may be spent against the premium cost of a Silver Plan (even if the individual chooses a health plan other than Silver). With respect to out-of-pocket limits for covered medical services, the new Affordable Care Act places a maximum annual limit that applies to equally to the Bronze, Silver, Gold, and Platinum plans. However, since this is a maximum, it is still possible for insurance companies to offer lower limits.

Results are based on responses to an online survey conducted from March 26, 2013 to March 31, 2013. Respondents were asked “How Will The New Obamacare Bronze, Silver, Gold, and Platinum Health Plans Always Differ From One Another?” Respondents had the option of choosing only one of the following answers: "Limits On Annual Out­of-Pocket Costs," "% of Medical Costs Paid by Insurance," "Medical Services Covered by Insurance," "Limits on Insurance Premiums" and “I don’t know.” The order of these options was randomized across respondents. The survey was displayed within a network of over 100 different news web sites and other content sites. Demographic inferencing and methodology to acquire survey respondents who approximate national statistics on age, gender, income, and region was performed by technology administered by Google. Race, education, and health insurance status were not examined. Margin of error across the responses is estimated at +2.7%/ -2.9%.