Obamacare Repeal Complicated By What Public Wants In A Replacement 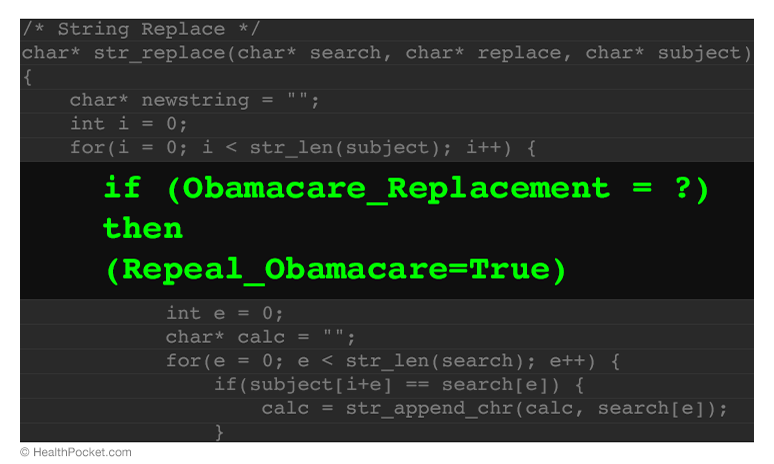 As various Congressional proposals are being developed as a legislative replacement for Affordable Care Act (Obamacare) health insurance, HealthPocket surveyed Americans across the country to determine what replacement characteristics would result in their support for Obamacare repeal. HealthPocket asked 1,208 adults nationwide, “What would you want in an Obamacare replacement that would make you support Obamacare repeal?” Survey respondents could choose from the following answers or “None of the above.”

The answer options were displayed in randomized order across respondents. Respondents could choose multiple answers unless they choose “none of the above.”

The survey results found that no single health plan trait was selected by a majority of respondents despite the opportunity to select more than one answer within the survey (with the exception of “none of the above” which prevented additional answer selections). Instead, the five of the seven possible answers had response percentages falling within a nine-point range.

Less than three-in-ten respondents selected any of the remaining options. The ability to choose the benefits of a health plan was selected by 29 percent of respondents and larger doctor networks was selected by 22 percent. “Less government subsidization” of health insurance by attracted the least support at 13 percent. 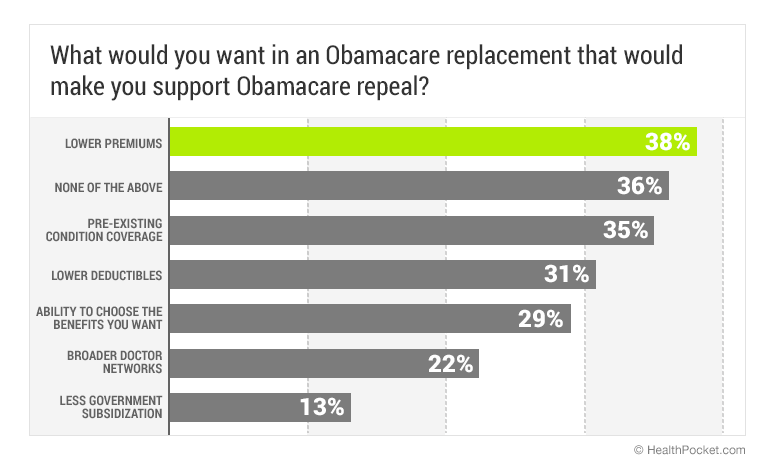 What Do The Survey Results Mean?

The question of what an Obamacare replacement must be in order to gather support for Obamacare repeal has revealed not only a diversity of perspectives but a lack of public consensus on replacement priorities. With no single characteristic gathering majority support, the survey suggests that a replacement may need to make progress on multiple fronts if it is to help marshal support for Obamacare repeal. However, the survey also revealed challenges for those opposed to repeal. Only one third of respondents nationwide appeared to share the “no repeal” view. Moreover, some of the opposition to repeal observed may have reflected dissatisfaction with the potential replacement characteristics available within the survey.

Part of the diversity of perspective on “repeal and repeal” arises from the nature of the Affordable Care Act. This legislation is largely focused on two markets: privately purchased health insurance and Medicaid markets with narrow eligibility criteria. Taken together, the private health insurance market and the Medicaid expansion market only covers a fraction of citizens. Most citizens receive health insurance through their employers and tens of millions more receive coverage through Medicare and the pre-ACA Medicaid rolls. Consequently, the majority of Americans are considering insurance legislation issues on insurance coverage they have not personally experienced.

Results are based on 1,208 responses to a nationwide survey conducted from January 27, 2017 to January 29, 2017. The survey asked respondents, "What would you want in an Obamacare replacement that would make you support Obamacare repeal?" Respondents had the option of selecting one or more of the following answers:

Respondents also had the option of choosing “None of the above” instead of any of the above answers.

The answer options were displayed in randomized order across respondents.

The survey was displayed within a network of over 100 different news web sites and other content sites. Demographic inferencing and methodology to acquire survey respondents who approximate national statistics on age, gender, income, and region was performed by Google-administered technology. Race, education, and health insurance status were not examined. Margin of error across survey responses is estimated at +2.6%/-2.5%.