"Abstain from drug use" most popular among those who favor requirements 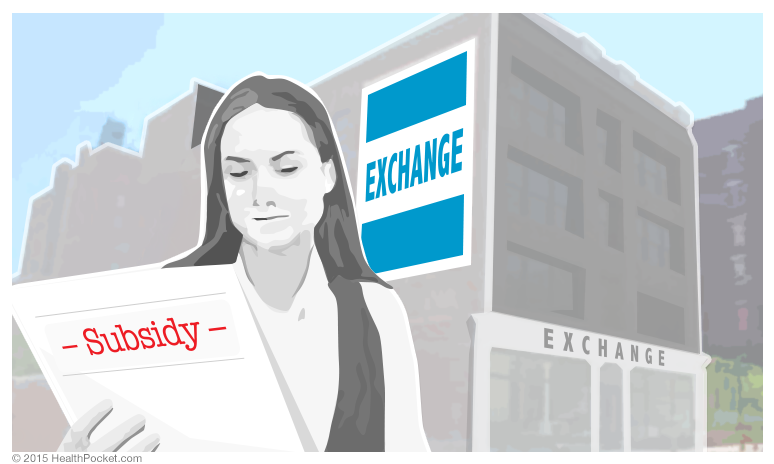 With the Supreme Court case King v. Burwell keeping Affordable Care Act subsidies in the news, HealthPocket conducted a nationwide poll of public sentiment towards the idea of tying health insurance subsidies to personal requirements. Using data from a two-part survey with over 2,500 respondents across the U.S., HealthPocket found the public significantly divided on the subject of tying personal requirements to subsidies, with no position securing a majority of support and a significant segment of the public uncertain of their position.

Under the Affordable Care Act, people making below 400% of the Federal Poverty Level have the potential to receive government subsidies that will pay a portion of their health insurance premiums. These subsidies are often substantial. According to published data from the Department of Health & Human Services, 2015 enrollees on the federal health insurance marketplace had an average premium list price of $364 a month but only paid $101 a month after premium subsidies were applied.1 Of the nearly 9 million enrollees who used the federal health insurance marketplace during the 2015 open enrollment period, 87% qualified for premium subsidies.2 For those enrollees whose income is between 100% and 250% of the Federal Poverty Level, additional government subsidization was available for out-of-pocket expenses. These out-of-pocket subsidies are available in cost-sharing reduction (CSR) versions of silver plans.3 According to income data for enrollees on the federal health insurance marketplace, 80% were eligible4 for cost-sharing subsidies though it is unclear how many enrolled in cost-sharing reduction silver plans.5

The first part of HealthPocket’s survey exploring public opinion on subsidy requirements asked, "Do you believe any requirements (e.g. no smoking) should be placed on people in order to receive Obamacare health insurance subsidies?" Of the three potential answers, "I’m not sure" was chosen most often at 37%. Close behind this percentage was "No, requirements would be unfair" at 34% and "Yes, requirements would be fair" at 29%. None of the three options were able to attract a majority of respondents. 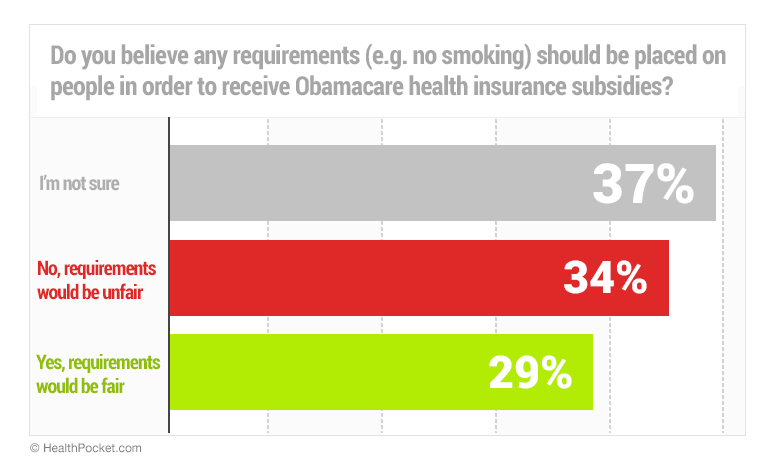 Those respondents who indicated support for subsidy requirements by answering "Yes, requirements would be fair" were asked a follow-up question: "In your opinion, what requirements should be placed on people in order to receive Obamacare health insurance subsidies?" Respondents could pick one or more answers from the following options displayed in randomized order:

In comparison to drug and smoking prohibitions, maintaining preventive care such as flu shots (43%) and maintaining weight below obesity levels (37%) both failed to attract support from at least half of respondents. Least popular among the subsidy requirements was requiring subsidies to be temporary (30%). 8% of respondents to this question did not support any of the requirements listed among the requirement options. 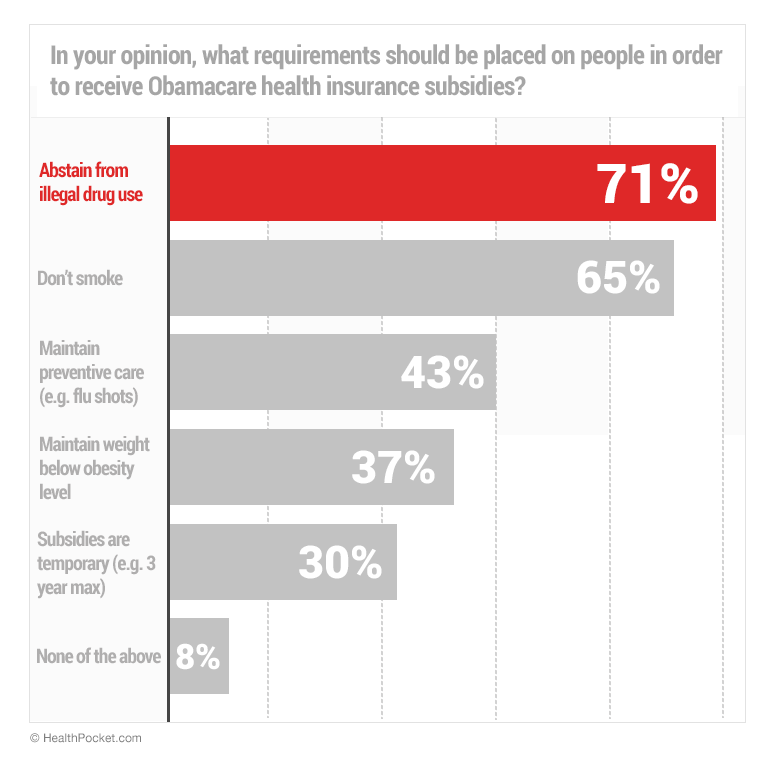 The nationwide survey illuminated substantial differences in opinion (as well as ‘no opinion’) regarding placing requirements on subsidy recipients. Some of the differences in opinion may reflect underlying political support or opposition to the Affordable Care Act itself. A provocative aspect of the poll results is the percentage of the public without a definite opinion on the subject of subsidy requirements ("I’m not certain"). This may suggest that broader public debate on the benefits and problems of tying requirements to subsidies may affect this population’s opinion.

The survey was displayed within a network of over 100 different news web sites and other content sites. Demographic inferencing and methodology to acquire survey respondents who approximate national statistics on age, gender, income, and region was performed by Google-administered technology. Race, education, and health insurance status were not examined. Margin of error across survey responses is estimated at +2.2/-2.2.