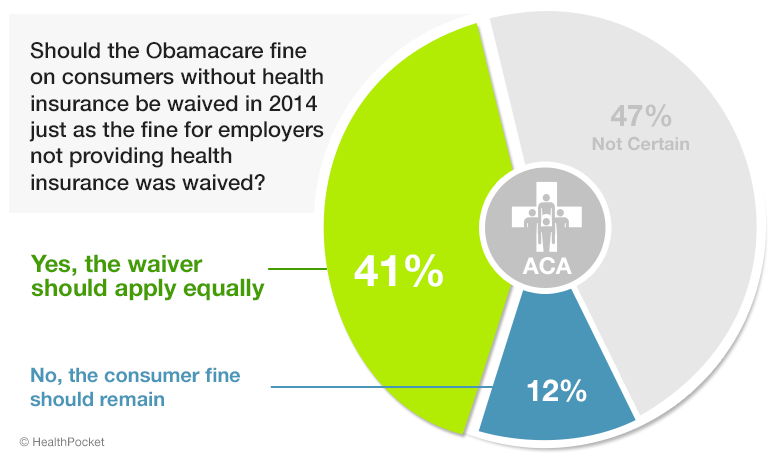 In the aftermath of last week’s surprise 2014 waiver of the employer-mandate to provide health insurance or face a fine, HealthPocket surveyed consumers to assess their feelings regarding the decision not to extend a similar penalty waiver to uninsured consumers.

For employers with 50 or more workers in 2014,1 there was a $2,000 penalty per full time employee for those employees not provided health insurance meeting the requirements of the Affordable Care Act. This insure-or-face-a-penalty provision does not become active for employers until 2015 now that the waiver for 2014 has been announced. However, most consumers still face a penalty for being uninsured starting in 2014. The 2014 penalty amount for individuals is 1% of their annual income or $95, whichever is the larger amount. Families face higher penalties than individuals and the penalty amount itself increases each year until 2016 when it reaches $695 or 2.5% of annual income for individuals, whichever is larger. After 2016 the penalty is adjusted based on cost-of-living.

The day after the government’s announcement of the 2014 employer mandate waiver, HealthPocket surveyed 884 people from across the United States and asked "Should the Obamacare fine on consumers without health insurance be waived in 2014 just as the fine for employers not providing health insurance was waived?" Nearly half of respondents were not certain. This uncertainty was expected given recent Gallup survey results indicating that one out of five Americans are still unaware that they face a penalty if they are uninsured in 2014.2

Out of those respondents that did have an opinion, there was a large divide of perspective. The majority answered "Yes, the waiver should apply equally." This answer represented 41% of all responses and was over three times the amount of people who answered "No, the consumer fine should remain" (12%).

The penalty for not being insured is enacted to maximize the amount of healthy people within the insurance pool to encourage lower health insurance premiums. However, with a sizable minority of consumers desiring a similar waiver as was granted to businesses, it is unclear whether the government will reconsider the start date for the consumer penalty.

Results are based on 884 responses to an online survey conducted from July 3, 2013 to July 5, 2013. Respondents were asked "Should the Obamacare fine on consumers without health insurance be waived in 2014 just as the fine for employers not providing health insurance was waived?" Three options were provided from which the respondent could select one: "Yes, the waiver should apply equally," "No, the consumer fine should remain," and "Not certain." The survey was displayed within a network of over 100 different news web sites and other content sites. Demographic inferencing and methodology to acquire survey respondents who approximate national statistics on age, gender, income, and region was performed by technology administered by Google. Race, education, and health insurance status were not examined. Margin of error across the responses is estimated at + 3.5/-3.5.

This survey analysis was completed by Kev Coleman, Head of Research & Data at HealthPocket.com. Correspondence regarding this study can be directed to Mr. Coleman at kevin.coleman@healthpocket.com

1 The 50 worker threshold applies to "full time equivalent" workers meeting the hours worked per week guidelines. Two or more part-time workers could equal a single full time equivalent employee depending on the hours worked by the part-time employees. The first 30 employees are excluded in calculating the penalty.
2 Jeffrey M. Jones. "In U.S., 43% of Uninsured Unaware They Must Get Coverage" Gallup.com. June 28, 2013. http://www.gallup.com/poll/163280/uninsured-unaware-coverage.aspx. Accessed July 6, 2013.