Support of Enrollment Period Extension Surpasses Half of Americans 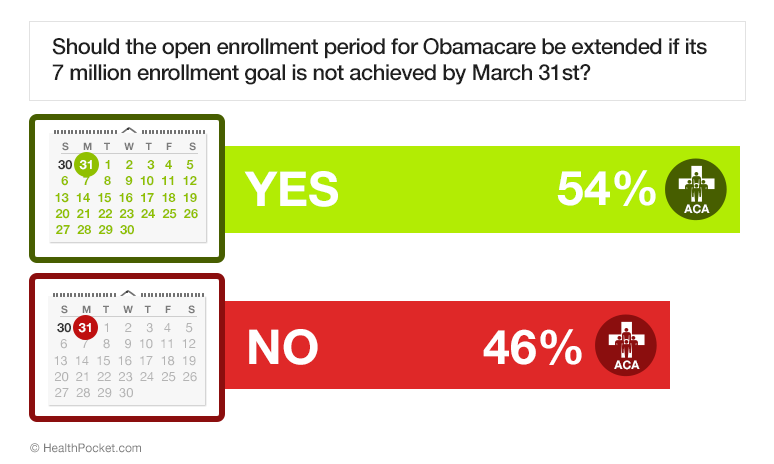 The White House confirmed this week that the Open Enrollment Period for Affordable Care Act health plans will not be extended beyond its scheduled March 31st conclusion.1 This inaugural enrollment period is 6 months in duration, twice as long as the enrollment period proposed for the 2015 health plan year.2 Government officials had initially hoped to enroll 7 million Americans in Affordable Care Act health plans by the end of this enrollment period,3 an expectation that is currently being adjusted downward. For those Americans who remain uninsured past the end of the open enrollment period, there is the prospect not only of a tax penalty but also a "lock out" from health insurance coverage until January 1, 2015.4 During the lock out period, consumers cannot enroll in Qualified Health Plans in most situations. Under current rules, the lock period will begin April 1st and last until November 15th, with any new Qualified Health Plan coverage beginning no earlier than January 1st 2015.

Given this week's confirmation of the March 31st end to the Open Enrollment Period, HealthPocket performed a nationwide survey in the same week asking "Should the open enrollment period for Obamacare be extended if its 7 million enrollment goal is not achieved by March 31st?" 54% of respondents nationwide indicated that they would like the Open Enrollment Period extended. Half of the respondents supporting the extension would do so regardless of whether the enrollment goals were achieved.

The Affordable Care Act's first enrollment period commenced with considerable consumer interest accompanied by various technical glitches across the exchanges that negatively affected enrollment volume. At the end of the first two months of the Open Enrollment Period less than 400,000 people had completed an application and then selected a health plan for enrollment.5 This was far below the average of more than 1.1 million enrollees per month needed to reach 7 million enrollees by March 31st.

A late February press release from the Department of Health and Human Services announced that the total people who have signed up for exchange health plans has risen to 4 million individuals.6 However, payment of a health plan's first monthly premium is necessary for the health plan's coverage to activate and insurance industry experts estimate that 20% of the enrollments in January were cancelled due to the failure of the enrollee to pay his or her premium.7 Given the current amount of enrollees, many market analysts believe that the 7 million goal is unattainable by the March 31st deadline.

"March 31, that's the last call. If folks aren't signed up by March 31, they can't sign up again until the next open-enrollment period with the 2015 rates. So if they want health insurance now, they need to sign up now, and we're going to make a big push these last few weeks."10

This closed market stands in contrast to the buying conditions in the pre-reform health insurance. Prior to the enactment of the Affordable Care Act, the individual health insurance market did not have a set open enrollment period for consumers. They could enroll or switch health plans throughout the year. However, the pre-reform market had medical underwriting so consumers who wished to enroll or switch plans faced the possibility of application rejections due to health status.

The Administration faces a divided public with respect to the Open Enrollment Period dates. Controversy will likely to follow any decision around the deadline, whether to leave the March 31st deadline standing or to extend it. However, based on the HealthPocket's survey results, it seems that an enrollment period extension enjoys more public support than retaining the existing deadline.

Results are based on 1,130 responses to a nationwide online survey conducted from March 4, 2014 to March 6, 2014. Respondents were asked, "Should the open enrollment period for Obamacare be extended if its 7 million enrollment goal is not achieved by March 31st?" Respondents had the option of selecting one of the following answers: "Yes, extend enrollment if the goal is missed," "Yes, extend enrollment regardless of goal," and "No, do not extend the enrollment period." The answer options were displayed in fixed order. The survey was displayed within a network of over 100 different news web sites and other content sites. Demographic inferencing and methodology to acquire survey respondents who approximate national statistics on age, gender, income, and region was performed by Google-administered technology. Race, education, and health insurance status were not examined. Margin of error across survey responses is estimated at + 3.1/-3.1.

1 Amy Goldstein and Sandhya Somashekhar. "Obama administration rewrites some health-care policies" The Washington Post (March 5, 2014). http://www.washingtonpost.com/national/health-science/obama-administration-rewrites-some-health-care-policies/2014/03/05/7fa11912-a489-11e3-a5fa-55f0c77bf39c_story.html
2 The 2015 plan year has been extended from November 15th 2014 through February 15, 2015. Dan Mangan. "Feds give 2-year grace period for non-Obamacare plans." CNBC.com (March 5, 2014). http://www.cnbc.com/id/101469265
3 Kathleen Sebelius, Secretary of Health and Human Services, had stated "I think success looks like at least 7 million people having signed up by the end of March 2014." However, officials have equivocated on whether the 7 million figure was a goal versus a projection. See Glen Kessler. "The White House's claim that 7 million enrolled in Obamacare 'was never our target number'." The Washington Post (January 3, 2014). http://www.washingtonpost.com/blogs/fact-checker/wp/2014/01/03/the-white-houses-claim-that-7-million-enrolled-in-obamacare-was-never-our-target-number/
4 Exceptional life events such as the birth of a child can qualify an individual for a special enrollment period that typically lasts 60 days. See "How can I get coverage outside of open enrollment?" https://www.healthcare.gov/how-can-i-get-coverage-outside-of-open-enrollment/
5 Department of Health and Human Services. "Nearly 365,000 Americans selected plans in the Health Insurance Marketplace in October and November." HHS.gov (December 11, 2013). http://www.hhs.gov/news/press/2013pres/12/20131211a.html
6 Marilyn Tavenner. "Another Significant Milestone: Marketplace Enrollment Hits 4 Million." HHS.gov (February 25, 2014). http://www.hhs.gov/healthcare/facts/blog/2014/02/marketplace-enrollment-hits-4-million.html
7 Robert Pear. "One-Fifth of New Enrollees Under Health Care Law Fail to Pay First Premium." New York Times (February 13, 2014). http://www.nytimes.com/2014/02/14/us/politics/one-in-5-buyers-of-insurance-under-new-law-did-not-pay-premiums-on-time.html?_r=0
8 "What if someone doesn't have health coverage in 2014?" https://www.healthcare.gov/what-if-someone-doesnt-have-health-coverage-in-2014/
9 Ibid.
10 Adam Aigner-Treworgy & Jim Acosta. "Obamacare enrollment hits 4 million, push underway to hit revised goal." CNN.com (February 25, 2014). http://politicalticker.blogs.cnn.com/2014/02/25/obamacare-enrollment-hits-4-million-push-underway-to-hit-revised-goal/