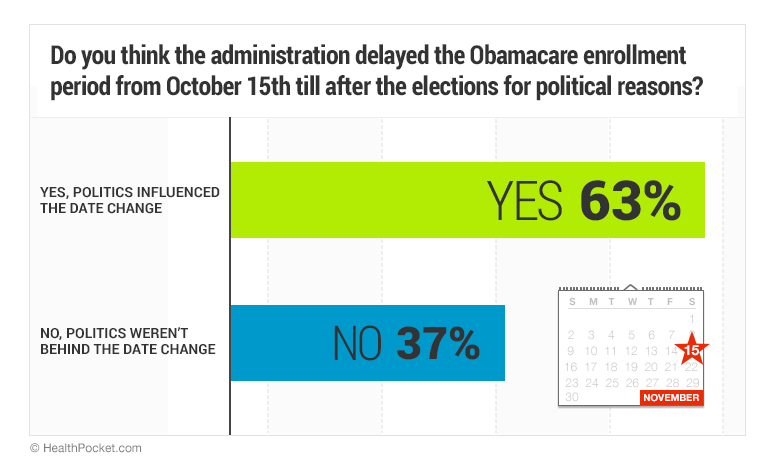 Originally, the Affordable Care Act open enrollment period for the 2015 plan year was scheduled to begin on Wednesday, October 15th 2014.1 However, the start date of the open enrollment period was later delayed to Saturday, November 15th 2014, well past the November midterm election date of November 4th.2 The justification given by the administration for this delay was that the insurers were being given additional time to set their 2015 rates based on current enrollees.3 When the enrollment period change was announced by the administration, the Republican House Majority Leader claimed that the date change was done because the president "does not want voters to see increased prices."4 The White House unambiguously denied this claim.5

With the announcement of the enrollment delay nearly a year old and the open enrollment period for the Affordable Care Act less than a month away, HealthPocket conducted a nationwide poll to determine whether the delayed start date of the enrollment period was viewed as politically motivated by the public. Americans across the nation were asked, "Do you think the administration delayed the Obamacare enrollment period from October 15th till after the elections for political reasons?" Respondents could choose one of two possible answers: "No, politics weren't behind the date change" or "Yes, politics influenced the date change." The order of these options was randomized across respondents.

HealthPocket found that despite nearly a year after its original announcement, the majority of Americans believed that the delay of the open enrollment period until after the election was politically motivated by the administration. With 63% of respondents choosing "Yes, politics influenced the date change," over six out of ten Americans believe the post-election start of open enrollment was dictated by the administration’s political concerns. This belief in a political motivation was found in the majority of respondents across the major regions of the U.S. At 65.9%, the Northeast had the largest percentage of respondents answer "Yes, politics influenced the date change."

While still a minority of respondents, the Midwest region had the highest percentage of people select the answer, "No, politics weren't behind the date change." Nearly 39 percent of the respondents in this region did not believe a political motivation lay behind the change to the Affordable Care Act’s enrollment date. This percentage for Midwest respondents was slightly higher than the 37% average nationwide.

Overall consistency in survey responses was observed among women and men. Approximately 2 percentage points separated the answer selections between the two groups revealing no significant differences in perspective between them.

HealthPocket’s nationwide survey illuminated a strong trend in public opinion that ascribes a political motivation to the delay of the Affordable Care Act’s enrollment Period. 70% more respondents believed there was a political reason behind the enrollment delay than those who did not. This sentiment crossed geographies as well as gender. The most influential factors affecting the public’s perspective on the issue were not solicited by the survey and remain a matter of speculation.

The modification of the 2015 enrollment period6 to November 15, 2015 through February 15, 2015 has several implications that are independent of politics. The new period extends into 2015 so those people desiring Affordable Care Act coverage to become effective January 1st should submit an enrollment by December 15th unless they intend to have an existing health insurance plan to auto-renew.7 Individual insurance applications submitted during open enrollment but after December 15th shall become effective according to the following rules:

People who fail to obtain creditable health insurance coverage in 2015 will face a more expensive tax penalty than was the case in 2014. The 2015 penalty is set at 2% of income or $325 per adult/$162.50 per child, whichever amount is higher.8

Results are based on 1,264 responses to a nationwide online survey conducted from October 24, 2014 to October 26, 2014. Respondents were asked, "Do you think the administration delayed the Obamacare enrollment period from October 15th till after the elections for political reasons?" Respondents had the option of selecting one of the following two answers: "No, politics weren't behind the date change" or "Yes, politics influenced the date change." The answer options were displayed in randomized order across respondents. The survey was displayed within a network of over 100 different news web sites and other content sites. Demographic inferencing and methodology to acquire survey respondents who approximate national statistics on age, gender, income, and region was performed by Google-administered technology. Race, education, and health insurance status were not examined. Margin of error across survey responses is estimated at +3.3/-3.3.