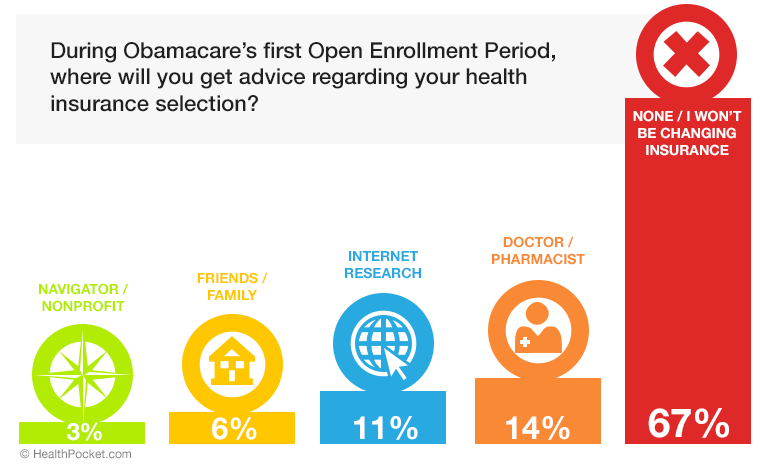 America is less than two months away from the largest change to its healthcare system since the introduction of Medicare. With only 16% of the population claiming to be very familiar with the Affordable Care Act1 and many more indicating confusion about the law’s provisions,2 the government is preparing to spend millions of dollars promoting the health insurance options available under Obamacare. Nonprofit advocacy groups aligned with the Obama Administration such as Enroll America and Organizing for Action have already launched privately funded advertising campaigns to promote the consumer benefits of Obamacare to the public. Additionally, state and federal exchanges will employ “navigators” to assist consumers with health insurance questions regarding the new health plans, subsidy eligibility, and enrollment.

Given emerging government and nonprofit marketing efforts for Obamacare as well as educational support to be offered by navigators, HealthPocket surveyed 1,150 adults across the nation to determine where consumers will seek guidance regarding health insurance during this year’s open enrollment period. 1,150 people across the nation were asked “During Obamacare's first Open Enrollment Period, where will you get advice regarding your health insurance selection?” Only 3% of survey respondents said that they plan on obtaining advice from a navigator or nonprofit group. This answer had the lowest response rate within every age category for the five answer choices offered. The survey also found that women were half as likely as men to prefer navigators and nonprofits for health plan guidance.

Among the younger age groups, the most important demographic segment for making Obamacare health insurance exchanges financially viable, navigators and nonprofits currently fare poorly as a choice for guidance. HealthPocket found that only 3% of respondents between 18 and 34 years old intended to seek advice from navigators or nonprofits.

Enrolling younger adults into the new Obamacare metal plans is vitally important because this group is more likely to be healthy and use medical services infrequently. Given that the Affordable Care Act will prohibit the denial of insurance to applicants due to pre-existing medical conditions, insurers will be covering a portion of the population that was previously uninsured or insured through expensive high-risk pools. In order to prevent these more sickly enrollees from driving up the cost of health insurance premiums, the insurers need millions3 of young and healthy consumers to enroll into one of the new bronze, silver, gold and platinum health plans regardless of whether that enrollment is performed on-exchange or off-exchange. Consequently, young adults will be one of the key targets for Obamacare advertising. The advertising effort itself will be enormous. The Associated Press estimates that, between federal and state marketing efforts, $684 million will be spent on radio, TV, and social media ads for the Affordable Care Act’s open enrollment period this year.4

Results are based on 1,150 responses to an online survey conducted from August 1, 2013 to August 5, 2013. Respondents were asked "During Obamacare's first Open Enrollment Period, where will you get advice regarding your health insurance selection?" Respondents had the option of selecting one of the following answers: “My doctor or pharmacist,” “A navigator or nonprofit group,” “Friends or family,” “Internet research,” and “None / I won't be changing insurance.” The survey was displayed within a network of over 100 different news web sites and other content sites. Demographic inferencing and methodology to acquire survey respondents who approximate national statistics on age, gender, income, and region was performed by Google-administered technology. Race, education, and health insurance status were not examined. Margin of error across survey responses is estimated at + 3.1/-3.3.