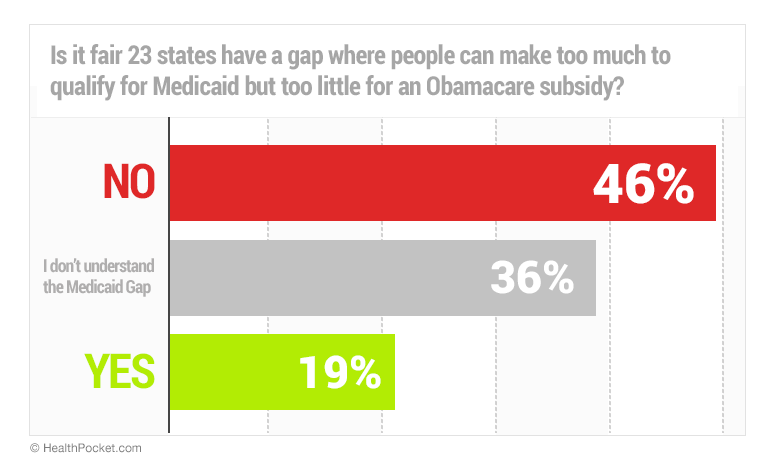 Following HealthPocket’s recent study of states with a gap between the highest income eligible for Medicaid and the lowest income eligible for an Affordable Care Act premium subsidy, HealthPocket conducted a nationwide poll regarding the ‘Medicaid Gap.’ This gap refers to the poverty-level income range in 23 states where residents can make more than the maximum income allowable for Medicaid health insurance eligibility but too little to qualify for a premium subsidy under the Affordable Care Act (a.k.a. Obamacare). It is estimated that 4.8 million Americans fall into this gap between Medicaid eligibility and Obamacare subsidies.1

In its nationwide survey, HealthPocket asked “Is it fair 23 states have a gap where people can make too much to qualify for Medicaid but too little for an Obamacare subsidy?” Nearly half of all respondents perceived the gap as unfair. Moreover, when respondents who did not understand the Medicaid Gap were excluded from consideration, 71% of the remaining respondents thought the Medicaid Gap was unfair.

In the U.S. South, where the Medicaid Gap is most common, poll results showed 50% of respondents believed the gap was unfair as compared to 19% who believed it was fair.

HealthPocket’s survey also found that one out of three Americans polled did not understand the gap issue associated with Medicaid and Obamacare. Part of this confusion may be due to a lack of familiarity regarding the Medicaid program. Medicaid is a public health insurance program typically serving low-income individuals and families as well as some other groups such as pregnant women. The maximum income limit for participation in the Medicaid program varies among states. State budgets partially fund the Medicaid program alongside funds from the federal government and, consequently, these budgets may influence decisions regarding Medicaid eligibility.

There are significant financial hurdles to health coverage for impoverished individuals making too much for Medicaid and too little for an Obamacare subsidy. HealthPocket’s recent Medicaid Gap study found “On average across the 23 states with a Medicaid/Obamacare Gap, a 30-year-old non-smoker with income below 100% FPL would have to pay at least 14% of their income to purchase a catastrophic health plan. For older individuals in the gap, the expense increased since premiums increase as age increases. The premium expenses for 40 and 50-year-olds were 16% and 22% of income respectively.”2 Moreover, the expense percentages cited above pertain to the lowest cost health plan available within a health insurance exchange. Entry-level bronze plans would be even more expensive.

The apparent lack of public support for the Medicaid Gap may contribute to continued debate on the subject within those states that have not expanded income eligibility for the Medicaid program. However, the Medicaid Gap does not necessarily have to be addressed by Medicaid expansion. Conceivably there are other options including legislation passed at the federal level that would extend eligibility for Obamacare subsidies below 100% of the federal poverty level floor currently in place.

Results are based on 866 responses to a nationwide online survey conducted from June 24, 2014 to June 26, 2014. Respondents were asked, “Is it fair 23 states have a gap where people can make too much to qualify for Medicaid but too little for an Obamacare subsidy?” Respondents had the option of selecting one of the following answers: “Yes,” “No,” or “I don’t understand the Medicaid Gap.” The answer options were displayed in randomized order. The survey was displayed within a network of over 100 different news web sites and other content sites. Demographic inferencing and methodology to acquire survey respondents who approximate national statistics on age, gender, income, and region was performed by Google-administered technology. Race, education, and health insurance status were not examined. Margin of error across survey responses is estimated at +3.8/-3.7.