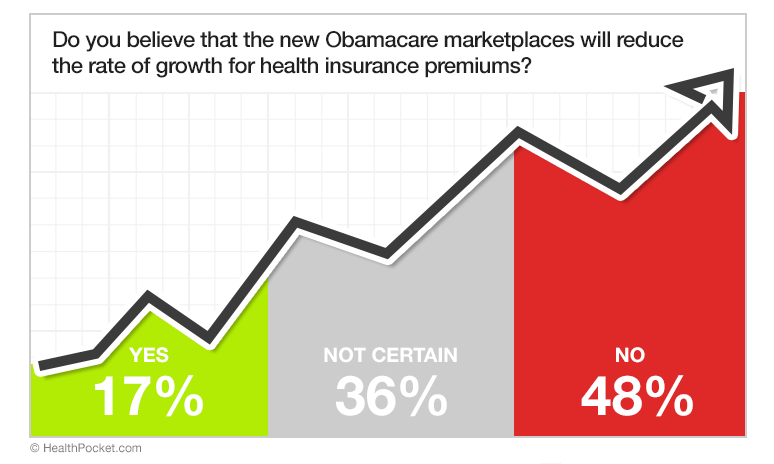 As October 1st approaches, various government and nonprofit advertising campaigns are directing public attention to the new Obamacare health insurance marketplaces (also known as “exchanges”). Millions of Americans are expected to enroll in health plans through exchanges in the next several years. Various surveys in the past several years have demonstrated that cost is among the chief concerns Americans have regarding their health insurance. With the opening of Obamacare marketplaces only weeks away, HealthPocket surveyed 670 adults across the U.S. to determine whether they believed the new Obamacare marketplaces would decrease the rate at which health insurance premiums will grow.

The survey results indicated that although a significant minority of Americans is uncertain, “No” was still the most common answer to the question “Do you believe that the new Obamacare marketplaces will reduce the rate of growth for health insurance premiums?” Nearly half (48%) of survey respondents answered “no” as compared to the 36% who were uncertain with respect to the marketplaces’ potential for containing the growth of health insurance premiums. Those that believed the exchanges would slow premium growth were the smallest portion of respondents at 17%.

The marketplaces themselves have several features that may positively contribute to premium containment, most notably an online venue that allows consumers to compare multiple health plans to one another. This competitive environment is intended to increase pressure on health insurance companies to offer premiums in the range of the other plans available on the marketplace. The commoditization of insurance benefits under Obamacare as well as the standardization of cost sharing across four metal plan designs also encourages insurers to compete against one another on price. The marketplace’s choice of one of the insurers’ silver plan as the benchmark from which all plan subsidies are calculated is another incentive for insurers to pursue low premiums. Those silver plans more expensive than the benchmark silver plan will have subsidies cover a lower portion of its premiums than the benchmark plan.

However, the exchanges do face an issue that will weaken their competitive potential. Not every health plan will be available on government marketplaces. Several large insurers including United Healthcare, Aetna, and Cigna have previously announced that in several states they will only offer health plans off exchange. HealthPocket’s previous research on off exchange plans has demonstrated that these well-known brands avoiding Obamacare marketplaces have traditionally offered low monthly premiums.1 The absence of these plans may produce less robust price competition among insurance companies participating on the Obamacare marketplaces.

The pessimism and uncertainty about the Obamacare marketplaces’ capacity to limit annual premium increases is a double-edged sword facing the administration. To their benefit, the low expectations could be turned into increased public support of Obamacare if the expectations regarding premiums are exceeded. However, should results confirm these expectations there may be increased political pressure to modify Obamacare.

Results are based on 670 responses to a nationwide online survey conducted from September 6, 2013 to September 8, 2013. Respondents were asked, " Do you believe that the new Obamacare marketplaces will reduce the rate of growth for health insurance premiums?" Respondents had the option of selecting one of the following answers: “Yes,” “No,” and “Not Certain.” The answer options were displayed in randomized order. The survey was displayed within a network of over 100 different news web sites and other content sites. Demographic inferencing and methodology to acquire survey respondents who approximate national statistics on age, gender, income, and region was performed by Google-administered technology. Race, education, and health insurance status were not examined. Margin of error across survey responses is estimated at + 4.9/-4.7.