Survey: Most Consumers Only Can Afford $100 or Less for Health Insurance Premiums 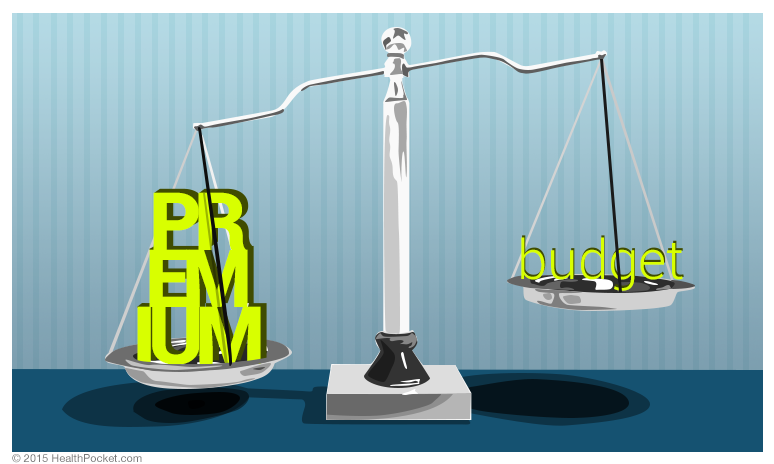 News1 of rate increases proposed for Affordable Care Act health plans in 2016 has renewed questions regarding the affordability of health insurance within the United States, particularly for those who purchase their insurance privately rather than receive it as an employee benefit. Premium affordability, of course, differs with respect to personal finances. To determine consumer perspectives regarding what insurance costs are affordable and what costs are prohibitive, HealthPocket conducted a nationwide survey.

1,137 people from across the country participated in a survey that asked, “Given proposed rate increases on health insurance, what is the highest monthly premium you could afford to pay for health insurance in 2016?” Respondents could select one of six possible answers: 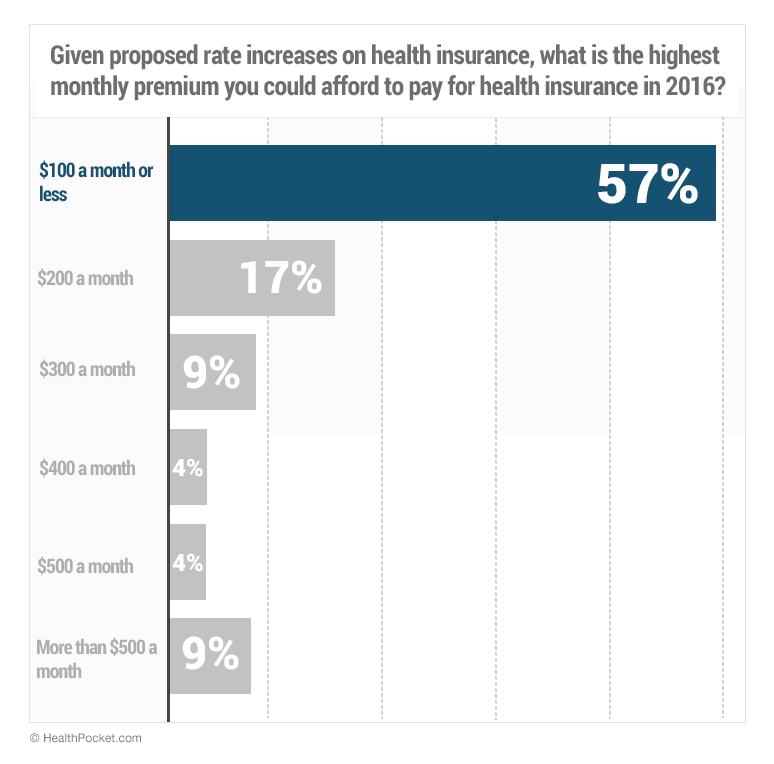 The results of HealthPocket’s nationwide survey may shed some light on the government’s challenges enrolling the so-called ‘young invincibles.’ Young invincibles is the label given to adults between the ages of 18 and 34.2 This demographic segment is considered a very important enrollee group within health insurance risk pools because they are more likely to be healthy and consume fewer healthcare resources, effectively subsidizing older and less healthy enrollees who use healthcare services more frequently.3

Despite the 18 to 34 age group’s disproportionate representation among the uninsured, the government has experienced challenges enrolling them in Affordable Care Act plans at a desired rate.4 For the enrollment season for the 2015 plan year, 28% of enrollees were between 18 and 34 years old.5 While one factor contributing to lower young adult enrollment is the ability for young adults to remain on their parents’ health plan until age 26, HealthPocket’s survey illuminates another factor: Cost. Over 60% of respondents between age 18 and 34 answered that they had $100 a month or less for health insurance costs. Moreover, the 18 to 34 year-old population segment has a higher risk of falling into the “subsidy gap.” The subsidy gap is the situation where an individual’s income is within subsidy range but subsidies are not received because the monthly premium for the enrollee’s age does not meet a minimum percentage of earnings to trigger premium assistance. In this scenario, young adults pay full retail price for Affordable Care Act health insurance. A 2014 study by HealthPocket found that there was a 41% narrower income range to trigger subsidies for those between ages 18 and 34.6

A Tale of Two Groups: The Subsidized vs. The Usubsidized

Another important dimension of the survey findings are their implications for those consumers who pay unsubsidized health insurance premiums. The average unsubsidized health insurance premium for 2015 on the federal marketplace, Healthcare.gov, was $364.7 In comparison, the average premium for an individual receiving a subsidy on Healthcare.gov is $101.8

Against the background of the nationwide survey results, the average subsidized and unsubsidized premiums on Healthcare.gov illuminate two very different experiences of American health reform. For the subsidized, the average marketplace premiums align well with popular perspectives on health insurance affordability. For the unsubsidized, average marketplace premiums are above the highest affordable premium for more than 4 out of 5 people surveyed. In fact, the unsubsidized premiums are over two and a half times more expensive than what most consumers claim is the maximum they can afford to pay for health insurance.

The results of the nationwide survey raise questions not just about the affordability of privately purchased health insurance but about the mechanics of contemporary healthcare reform. The heavy reliance on selective premium assistance to manage insurance costs has had the unintended side effect of dividing health insurance consumers into two groups, the subsidized and the unsubsidized. For the subsidized, recent healthcare reform has produced privately purchased plans that are not only open to those with expensive pre-existing conditions but are also largely affordable. For the unsubsidized, recent healthcare reform produced a health insurance market considerably more expensive than the market it replaced9 with average unsubsidized premiums affordable to a small segment of the population. The unfinished business of American health reform is the improvement of the underlying business, regulatory, and consumer behavior issues contributing to high health insurance costs so that coverage is affordable to more individuals, regardless of whether a subsidy is available. Given the pending arrival of 2016 rate increases, this unfinished business is all the more pressing.

Results are based on 1,137 responses to a nationwide survey conducted from September 30, 2015 to October 2, 2015. The survey asked respondents, "Given proposed rate increases on health insurance, what is the highest monthly premium you could afford to pay for health insurance in 2016?" Respondents had the option of selecting one of the following six answers: "$100 a month or less,” “$200 a month,” “$300 a month,” “$400 a month,” “$500 a month,” and “More than $500 a month" The answer options were displayed in fixed order across respondents.

The survey was displayed within a network of over 100 different news web sites and other content sites. Demographic inferencing and methodology to acquire survey respondents who approximate national statistics on age, gender, income, and region was performed by Google-administered technology. Race, education, and health insurance status were not examined. Margin of error across survey responses is estimated at +2.9/-3.0.