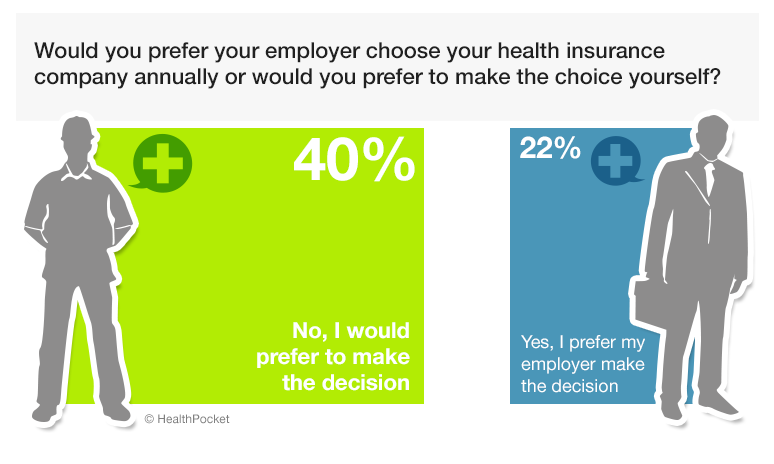 Why Most Americans Today Cannot Select their Own Health Insurance Company

Another factor contributing to the dominance of employer-based health insurance in the American market concerns medical underwriting, the process by which insurance applications are evaluated based on a review of health status and medical history. In the individual and family health insurance market, most states allow insurance firms to reject applicants due to medical history or current health status.6 Previous research by HealthPocket found that one-out-of-five applicants on average are denied coverage7 in this market.

Employer-based health insurance, in comparison, is group health insurance where employees in companies of 2 to 50 employees cannot be rejected due to medical underwriting thus making the coverage more attractive to those with pre-existing conditions and other health concerns. This provision is known as "guaranteed issue" and was enacted as part of the Health Insurance Portability and Accountability Act.8 Large group insurance for companies over 50 employees is not guaranteed issue. An insurer can reject the large group as a whole but cannot reject eligible individual employees based on medical underwriting if the large group has been accepted for insurance.9

While it is difficult to predict with certainty future developments in the U.S. healthcare market, there are several forces that may result in more working Americans choosing their own health insurance company. Most notably, the elimination of many disparities between the individual and employer-based health insurance markets under Obamacare will result in easier worker migrations from the employer market into the individual market. Subsidies will exist for those workers whose employers fail to provide health coverage or that provide coverage that does not meet Obamacare’s definition of affordability. Essential Health Benefits requirements will bring greater parity among benefits received from health plans in either markets. The risk of insurance denial because of health will also be eliminated in the individual market due to Obamcare’s guaranteed issue provision.

8% of respondents answered, "My employer does not offer health insurance."

Results are based on 781 responses to an online survey conducted from July 16, 2013 to July 18, 2013. Respondents were asked "Would you prefer your employer choose your health insurance company annually or would you prefer to make the choice yourself?" Respondents had the option of selecting one of the following answers displayed in random order: "Yes, I prefer my employer make the decision," "No, I would prefer to make the decision," "My employer does not offer health insurance," and "I am not employed." The survey was displayed within a network of over 100 different news web sites and other content sites. Demographic inferencing and methodology to acquire survey respondents who approximate national statistics on age, gender, income, and region was performed by Google-administered technology. Race, education, and health insurance status were not examined. Margin of error across survey responses is estimated at + 3.8/-3.7.