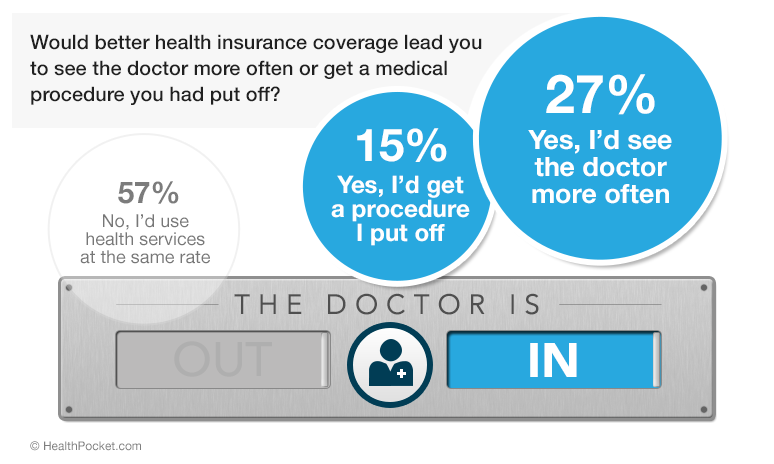 The effect of more extensive health benefits on medical services use is one of the most overlooked topics associated with the Affordable Care Act (Obamacare). The issue is crucial with respect to healthcare’s ongoing affordability because the rate at which medical services are utilized in the past influences health insurance premiums in the future. Without changes in the costs of healthcare delivery or overall patient health, an increase in the use of medical services will result in an increase in insurance premiums. A presently unanswered question about health reform is whether the coming expansion1 in health benefits for the insured, as well as the uninsured, will affect medical service usage.

In the interests of answering this question, HealthPocket surveyed 1,356 adults across the United States and asked "Would better health insurance coverage lead you to see the doctor more often or get a medical procedure you had put off?" More than one out of four respondents answered that they would see the doctor more frequently and an additional 15% answered that they would get a medical procedure they had put off. In total, 42% of respondents’ answers indicated a higher use of medical services if their health insurance coverage improved.

These results suggest that insurance premiums in the second year of Obamacare, 2015, may experience a temporary rise due to the pent-up demand for medical procedures being addressed in 2014. Assuming a two-year period for consumers to exhaust pent-up healthcare demand, the true baseline for Obamacare’s effect upon health insurance premiums should be evident in 2016. However, while healthcare consumption driven by postponed medical procedures is expected to be a temporary phenomenon, the increase in healthcare service usage due to superior insurance benefits is not. 27% of survey respondents nationwide indicated that better health insurance coverage would lead to more frequent doctor visits. As previous research by HealthPocket has demonstrated, Obamacare plans do represent an improvement in health benefits. Existing health plans in the Individual & Family health insurance market average only 76% of the Obamacare plan benefits.2

The effect of improved insurance benefits increasing utilization has precedent in healthcare. For example, the implementation of the prescription drug benefit in the Medicare program resulted in an increase in prescription drug use.3 The effect of Massachusetts health reform, often referred to as Romneycare, was more ambiguous. By 2010, there resulted in an increase in utilization for primary care and specialist services and a decrease in hospital and emergency services after the introduction of improved insurance coverage in 2006.4 A 2013 study published in the New England Journal of Medicine found that the introduction of Medicaid coverage to the previously uninsured population in Oregon increased use of medical services without an improvement in measured physical health outcomes.5

Increased medical service utilization may be an unintended consequence of Obamacare. If it is, more attention will need to be given to healthcare provider models that either link insurance payments for providers to lower overall healthcare costs6 or that deliver a portion of traditional healthcare services through lower costs channels such as email or online videoconferencing. Healthcare provider organizations that can deliver lower costs from these models, despite the occasionally ambiguous relationship between medical interventions and overall healthcare costs,7 will be best positioned to succeed in the healthcare market under the Affordable Care Act.

Given the significance of a health plan’s breadth of benefits on the use of medical services, HealthPocket's health insurance comparison tool allows consumers to view a health plan’s included and excluded benefits. Consumer can use this information as part of their shopping process.

Results are based on 1,356 responses to an online survey conducted from June 5, 2013 to June 7, 2013. Respondents were asked "Would better health insurance coverage lead you to see the doctor more often or get a medical procedure you had put off?" Respondents had the option of choosing only one of the following answers: "No, I'd use health services at the same rate," "Yes, I'd see the doctor more often," and "Yes, I'd get a procedure I put off." The order of these options was randomized across respondents. The survey was displayed within a network of over 100 different news web sites and other content sites. Demographic inferencing and methodology to acquire survey respondents who approximate national statistics on age, gender, income, and region was performed by technology administered by Google. Race, education, and health insurance status were not examined. Margin of error across the responses is estimated at +2.7%/ -2.7%.