Connecticut Among The Highlights While Hawaii Rates Worst 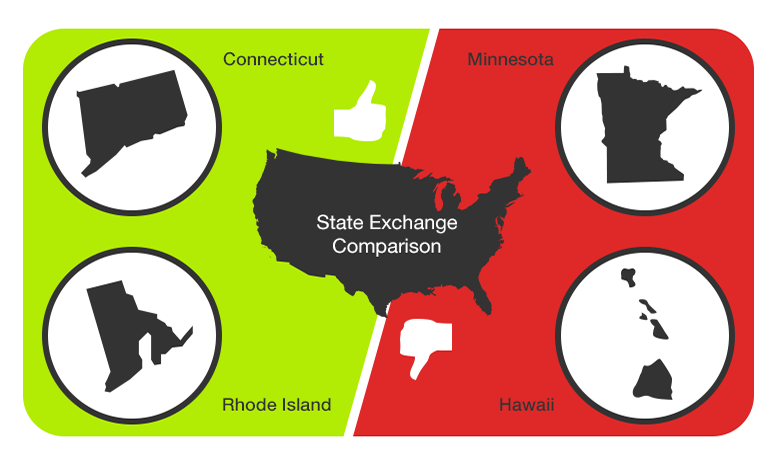 Two weeks into the inaugural open enrollment period for the Affordable Care Act, millions of health insurance shoppers across the nation have explored their local state’s health insurance exchange, judging their strengths as well as the areas needing improvement. However, these shoppers likely have little understanding of how their particular state exchange compares to the exchanges used in other states. In order to provide consumers with information on this matter, HealthPocket used a team of five web site testers to examine the exchanges for each state and Washington D.C. The exchanges were evaluated with respect to the following shopping metrics:

HealthPocket found that the technical errors that were widely reported on during the initial release of the health exchange web sites were not prevalent during the period October 11 through October 15 when the web sites were evaluated.1 Download times for individual web pages on the exchange sites were also satisfactory and averaged approximately one second per page.2 However, despite these commonalities among the exchanges, there was still a substantial disparity among the online health plan shopping experiences provided by the different exchanges. Part of this discrepancy can be attributed to the fact that all the state exchanges do not use the same underlying software system. 36 states use the federal government’s Healthcare.gov technology for their health plan comparisons3 and enrollment functionality with the remaining states administering their own web sites.

Many consumers likely have been surprised by those exchanges that required personal information prior to the display of health plan comparisons. Two previous nationwide polls by HealthPocket had found one-out-of-four adults did not expect health insurance exchanges to require personal information.4 At the time of testing, some exchanges (Hawaii, Maryland, Nevada, New York, Washington D.C., and Vermont) required web site visitors to identify themselves prior to process of comparing insurance plans with premiums adjusted for their circumstances (e.g. age, region).

Upon initial public release, the federal health insurance exchange serving 36 states had a web site navigation that required visitors to create an account and fill out an insurance application prior to display of the health plan comparison functionality. The application process collected confidential personal information such as name, address, and social security number. Subsequent to launch, the federal exchange adapted their web site to call attention to an alternative path to the health plan comparison tool that can be used anonymously. The government indicates that this tool was previously available within the web site but was not conspicuously highlighted to web site visitors.5

For those state exchanges that allowed web site visitors to compare plans anonymously, HealthPocket examined the number of steps required to arrive at the plan comparison functionality. Testers were instructed to count only mandatory steps within the process (e.g. a click on a “continue” button) and text fields were counted as one step each regardless of how many numbers or letters needed to be entered into the field. Optional entries were not counted as steps.

Among single web site exchanges with anonymous health plan comparisons, testers found Minnesota’s exchange, MNsure, had the most steps at 18.

One of the challenges with online shopping is that more steps increase the risk of web site visitors abandoning the shopping process. The most successful ecommerce web sites such as Amazon.com minimize the number of steps from the home page to product comparisons. On Amazon’s web site, a consumer can shop for products in as little as two steps.6 However, it should be noted that the exchanges have a consumer incentive that Amazon does not: Failure to enroll in health insurance can result in a tax penalty.

The new health insurance exchanges are not just online experiences but also provide toll-free phone support for web site visitors. HealthPocket evaluated the phone support for the different exchanges by placing a call to the exchanges and asking a basic question to a live representative regarding the Affordable Care Act: What is the last day of the open enrollment period?

HealthPocket found placed these calls between 10:00 a.m. and 11:30 a.m. local time for the exchange. The standard procedure for exchange phone support was to begin the call with a pre-recorded phone message. However, almost all exchanges had a live representative speaking with our testers within two minutes from call initiation. Three states, however, were outliers with respect to phone performance. Washington’s exchange, the Washington Healthplanfinder, took 10 minutes on the phone before a live representative was reached. Minnesota’s exchange, MNsure, took slightly longer at 11 minutes to reach a live customer service representative. Massachusetts faired the worst with a three minute wait time that concluded with a voice mail instructing the caller to leave a message and expect a response within 48 hours.

The Problem with Hawaii

HealthPocket rated Hawaii’s health insurance exchange the lowest among all the exchanges reviewed. The principal reason for the state’s low rating is that the Hawaii exchange at the time of testing did not allow consumers to compare health plan options online. Instead, the web site directed consumers to an insurance application form and stated, “You can file an application with the Hawaii Health Connector if you are interested in purchasing health insurance plans…The Connector will contact you in the coming weeks after you have completed your application to inform you of your eligibility and plan options.” The Hawaii exchange did offer phone support for residents interested in discussing health plan options and enrollment by telephone. Coral Andrews, the Executive Director of the Hawaii Health Connector exchange, released a statement on October 2, 2013 explaining “We continue to work collaboratively with both our state partners and health insurers to make certain that consumers will have access to accurate plan and rate information in a secure online marketplace. Like many health marketplaces across the nation, we are working in earnest to add functionality in the coming days and weeks...Each individual and small business scenario is unique so it is paramount that multiple scenarios must be tested to assure accuracy of plan and price information. When this critical aspect of our system is fully functional and validated for accuracy, then we will provide it for consumers to shop and enroll.”8 Subsequent to the testing period, Hawaii unveiled additional web site functionality. The functionality required web site visitors to identify themselves in a registration process prior to comparing Hawaii health plans. When the HealthPocket tester used the functionality in an attempt to compare plans, it appeared as if an internal customer support system was displayed.

HealthPocket’s review of the new health insurance exchanges found clear improvements (e.g. web site performance, technical glitches) from the time of the exchanges’ initial public release but there are still areas needing improvement. Most notably, most exchanges need to evaluate their sites’ navigation and workflow to reduce the steps standing between web site visitors’ entry into the exchange site and health plan shopping. Additionally, those states that do not provide anonymous shopping experiences may lose a portion of the public that would prefer to remain anonymous until they are ready to complete the insurance enrollment process.

A team of five testers visited each United States state health insurance exchange web site between October 11, 2013 and October 15, 2013. The various web sites were not visited on the same day within the aforementioned period. Online functionality and phone support for individual and family insurance plans were evaluated. Group insurance functionality on exchanges was not evaluated.

Customer services calls were made between 10:00 a.m. and 11:30 a.m. local time for the individual exchanges. For states using Healthcare.gov to provide health insurance plan comparison functionality, a single representative state was selected for examination. All testers asked the same question to the exchange call center representatives.

This market analysis was completed by five testers from HealthPocket.com. Correspondence regarding this study can be directed to Kev Coleman, Head of Research & Data at HealthPocket.com, at kevin.coleman@healthpocket.com.

1 Since limited portions of the exchanges’ web site functionality were examined in the study, HealthPocket cannot make a representation of the web sites being error free.
2 It should be noted that numerous factors can affect a web site’s performance for an individual including, but not limited to, the data transfer rate for an individual’s internet service and the browser used to display the web page.
3 Most of these states use the Healthcare.gov web site alone while some states, such as Illinois and Delaware have a partnership model where the state provides some portion of the web site experience. See “State Decisions for Creating Health Insurance Marketplaces.” http://kff.org/health-reform/state-indicator/health-insurance-exchanges/. Last accessed October 15, 2013.
4 HealthPocket conducted two prior nationwide surveys that found that approximately one-out-of-four adults were unaware that the health insurance exchanges would utilize confidential personal information. See Kev Coleman. "High Public Concern Over Privacy and Hacking on Obamacare Exchanges." HealthPocket.com. (September 25, 2013). /healthcare-research/surveys/obamacare-health-insurance-exchange-privacy-data-security. Last accessed October 15, 2013.
5 Dan Mangan. "Rx for Obamacare? Feds may rebuild health marketplace." CNBC.com. (October 11, 2013). http://www.cnbc.com/id/101106324. Last accessed October 16, 2013.
6 For example, entering a product name in Amazon’s home page search field and clicking the “Go” button.
7 Associated Press. "New wrinkle: Deadline to avoid health law fines will fall around Valentine’s Day, not March 31" Washington Post. (October 9, 2013). http://www.washingtonpost.com/politics/deadline-to-avoid-health-law-fines-will-fall-around-valentines-day-not-march-31/2013/10/09/7e45838c-30f3-11e3-ad00-ec4c6b31cbed_story.html. Last accessed October 16, 2013.
8 http://www.hawaiihealthconnector.com/hawaii-health-connector-welcomes-consumers-marketplace/ Last accessed October 15, 2013.