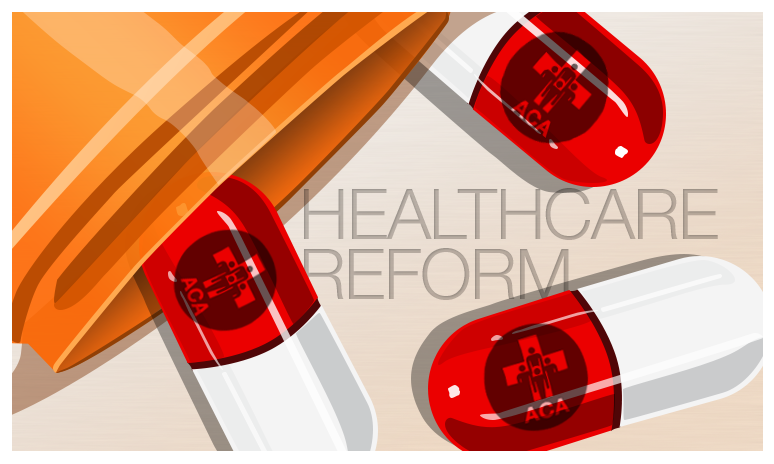 The below table breaks down out-of-pocket costs by drug category (generic drugs, preferred brand name drugs, and specialty drugs). Since a health plan may choose to use either a flat fee copayment or a coinsurance charge (where the enrollee pays a percentage of the total drug cost), both cost-sharing methods are included within the table.. All data represents national averages. 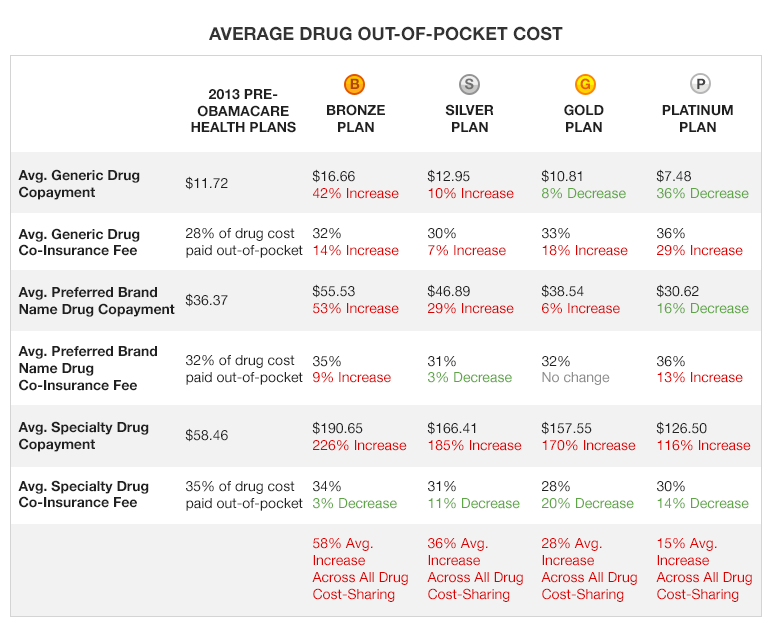 The increases in drug cost-sharing among the metal plans do not equate to corresponding drug spending increases. Drug coverage is more complex. Differences in deductibles, out-of-pocket caps, and drug formularies can profoundly influence consumer drug expenses.

Unfortunately government data is not available currently regarding what drugs are included within each health plan and what cost-sharing tier each drug is assigned.

When discussing the Affordable Care Act, there is a temptation to reduce the legislation’s effect into a “better than” or “worse than” comparison to the pre-reform health insurance market. In the case of prescription drug coverage, the Affordable Care Act resists this simplification inasmuch as the law produced results that are both better and worse. The legislation created an expansion of the drug benefit for the individual market and small group market inasmuch as all non-grandfathered health plans must include a prescription drug benefit. Subsidies on health insurance premiums also result in some portion of the previously uninsured being able to enroll in a health plan containing a drug benefit. Additionally, a few over-the-counter drugs such as aspirin, folic acid, and iron supplements can be obtained without a copayment when used as preventive medicine.8

Health reform represents a decline in medication coverage inasmuch as the average drug copayments and co-insurance fees are higher than the averages found in the pre-reform market. HealthPocket found this to be true regardless of health plan category. Consequently, new health plan enrollees who use multiple costly drugs face the greatest burden from the increases in copayments and co-insurance fees. New health plan enrollees who use drugs infrequently, on the contrary, may not notice the cost-sharing increases.

For those health insurance shoppers with frequent medication use, they should confirm the following for all health plans they are comparing:

All drug cost-sharing data pertained to the four Affordable Care Act metal plans: bronze, silver, gold, and platinum. All plans investigated in this study belong to the individual & family insurance market. Medicare, Medicaid, short-term health insurance, and group health insurance plans were not analyzed as part of this study.

Data for drug cost-sharing in 2013 pre-reform health plans in the individual market was taken from the HealthPocket study “Obamacare Expands Drug Coverage But Out-of-Pocket Expenses Go Up” (see endnotes for full citation). Drug cost-sharing data was not available for nonpreferred brand name drugs in the pre-reform market so that category of drugs was not examined in this study.

This analysis was written by Kev Coleman, Head of Research & Data at HealthPocket, with data analysis performed by Jesse Geneson, data researcher at HealthPocket. Correspondence regarding this study can be directed to Mr. Coleman at kevin.coleman@healthpocket.com.