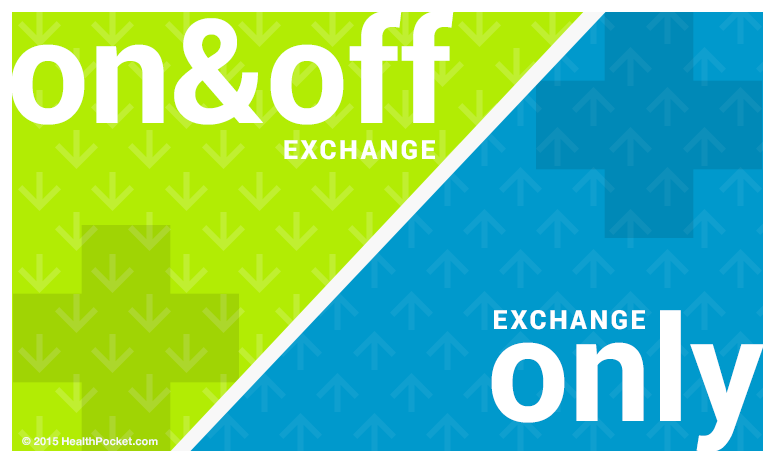 Using the government’s Health Insurance Marketplace public use files, HealthPocket found that only a small percentage of metal plans were distributed exclusively through government exchanges as opposed to distributed both on and off-exchange. For every one exchange-only metal plan within the government dataset, there were approximately 29 metal plans that were simultaneously offered on and off-exchange. The insurance companies offering the exchange-only health plans within the government records were various Blue Cross Blue Shield entities as well a CO-OP health insurance company.

As the tables above demonstrate, health plans that are only sold through exchanges averaged higher premiums than health plans that were sold both on-exchange and off-exchange. The biggest difference in average premiums was for bronze plans, where premiums were approximately 15% more expensive on average for exchange-only plans. Exchange-only silver plans were nearly 7% more expensive than their on/off-exchange competitors and gold plans were approximately 5% more expensive. Since there were no instances of exchange-only platinum plans in the government data, no comparison was made for this metal tier.

Why are exchange-only health plans more expensive on average than their counterparts sold both on and off-exchange? The answer is unclear. One factor that may have contributed to the results was that the small number of exchange-only plans creates a situation where expensive plans can influence averages more heavily than they would if there were more numerous plans within the exchange-only category.

Another factor that may have contributed to the higher premiums associated with exchange-only plans is the premium subsidization that occurs on exchanges. The average cost of a health plan sold on the federal exchange during annual enrollment was $364 but the average post-subsidy premium paid by enrollees was $101.3 87% of federal exchange enrollees in 2015 received premium subsidies.4 Off-exchange plans are associated with non-subsidized consumers and, consequently, this non-subsidized population may be more price sensitive since they pay the full premium for a health plan.

Analysis was limited to 2015 Affordable Care Act metal plans recorded within the Health Insurance Marketplace Public Use Files provided by the Center for Consumer Information and Insurance Oversight. Only privately purchased plans within Federally Facilitated Exchange states were examined. Medicare, Medicaid, and employer-based health insurance plans were not included within the study.

Health plan distribution on-exchange only or both on and off-exchange was determined by information provided within the Health Insurance Marketplace Public Use Files.

Premium costs were not adjusted with respect to Affordable Care Act subsidies or weighted for plan enrollment. Plan data was obtained from insurance records made public by the Centers for Medicare & Medicaid Services’ Consumer Information and Insurance Oversight agency. Data for 2015 plans was collected on May 9, 2015.

This analysis assumes that the underlying government data is accurate. While every effort was made to use a comprehensive collection of plans, HealthPocket makes no representation that every plan in the individual insurance market or in an individual state was included in this analysis. Percentages are rounded according to standard industry practices.

This analysis was written by Kev Coleman, Head of Research & Data at HealthPocket with primary data research performed by Regis Haegler. Correspondence regarding this study can be directed to Mr. Coleman at kevin.coleman@healthpocket.com.