Consumers Should Review Both On-Exchange & Off-Exchange Plans When Shopping 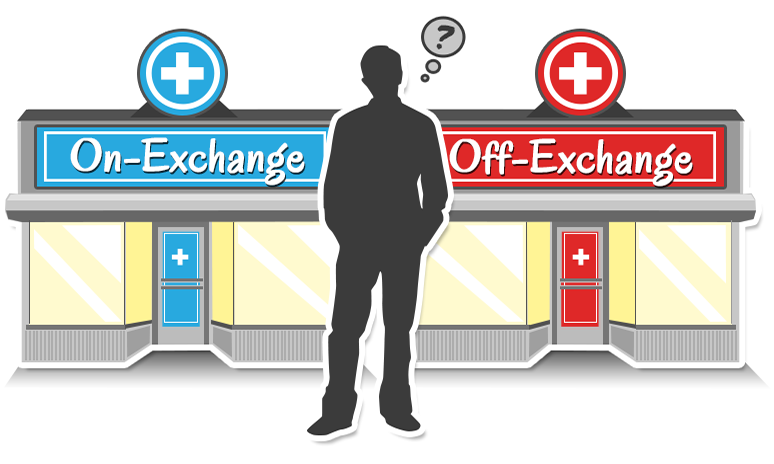 The difference in insurance plan inventories on and off the exchanges raises the question of whether the departure of several well-known brands from the exchanges will have implications for price competitiveness on exchanges. HealthPocket examined 1,621 health plans across 10 states where insurers have publicly announced they would not participate in the state’s health insurance exchange.1 Using Health & Human Services’ insurance data, HealthPocket calculated the average 2013 monthly premium for a 35 year-old male nonsmoker for these off-exchange insurers. This amount was then compared to the average premium for the rest of the insurers in the same state using the same applicant characteristics.2 The comparison demonstrated that in 9 out of 10 states examined, the insurers that will sell only off-exchange currently average lower premiums than the other plans in their state. On average, the health plans avoiding exchanges were 23% less expensive than the remaining insurers in the state.

Some of the well-known health insurance brands that are avoiding one or more state exchanges include:

While the analysis examined today’s pre-Obamacare health insurance rates and was limited to the health plan inventory recorded by the government, several aspects of the results deserve commentary. Most notably, if the 2013 premium tendencies documented in this study continue for 2014 then consumers ineligible for subsidies must compare the prices of off-exchange plans to on-exchange plans in order to find the most affordable health plan.

If the 2013 premium trends documented in this study continue for 2014, it is probable that exchanges will have limited appeal to consumers ineligible for subsidies due to inadequate price competitiveness on the exchange. In this scenario, the on-exchange health plans will have its risk pool skewed toward subsidy-eligible consumers. A study by the Kaiser Family Foundation projects that the population that will enroll in exchanges have a higher incidence of poor or fair health than privately insured individuals.3 Consequently, insurers on the exchange may attract more enrollees who use healthcare services at an elevated rate that may eventually result in higher premiums to cover costs.4 Higher premiums, in turn, could make the plans more unappealing to subsidy ineligible consumers and produce a chronic negative premium cycle for the health plan.

Since a health plan insurer must treat on-exchange and off-exchange populations as a single risk pool,5 it is interesting to note that some insurers have used separate insurance companies to operate on an exchange rather than leverage their existing brand. For example, the parent company of Regence BlueCross BlueShield created a separate insurance company, BridgeSpan, to operate exclusively on Oregon’s exchange. This strategy of an exchange-specific insurance company may allow a parent company to explore the business potential of the exchange environment without risking adverse risk pool effects for its central insurance brand. The Affordable Care Act does include several provisions to help an insurer in the event that it enrolls a population with higher medical costs: risk adjustment payments, reinsurance, and risk corridors. Together these mechanisms work to lessen the financial impact of enrollees with higher medical costs insurers. However, while these mechanisms can diminish the negative effects of high medical claims they do not eliminate the effects completely.6

For the consumer, the differences in offerings between the on-exchange and off-exchange health insurance markets result in the need to evaluate both markets when shopping for a new Obamacare health plan. While the present study focused on the matter of price competitiveness, there is also the matter of quality. Many of the insurance companies avoiding exchanges are for-profit and nonprofit health plans typically score higher on quality rankings than for-profit health plans.7 An informed consumer will need to balance these considerations together in order to identify the right health plan for his or her circumstances.

Results of the study were based on an analysis of 1,621 health insurance plans offered in the states of California, Connecticut, Colorado, Georgia, Maryland, North Carolina, Oregon, South Carolina, South Dakota, and Washington. Health plans were limited to the individual and family insurance market for consumers under the age of 65. Health plans from the Medicare, Medicaid, and employer-based health insurance markets were not included within this study.

The premium data used in this study was obtained from insurance records made public by the Department of Health & Human Services. The data was collected on September 3, 2013. Premium quotes were generated for a 35 year-old male nonsmoking applicant for each 2013 health plan within the government health insurance records. Redundant premium quotes were obtained for each plan using identical applicant profiles distinguished by geography (the two largest metropolitan regions within each state were used). The redundant quotes were averaged together for a single premium estimate for the health plan. Health plans within each state were then placed into two categories: 1) state off exchange and 2) remaining state health plans. Each category had all the premiums within the category averaged. Premium averages were not weighted for enrollment.

Categorizing plans as "off exchange" was based on newspaper reports or public announcements by the insurers regarding their intent to participate within an exchange. In some cases an insurer had originally intended to participate in an exchange but later reversed its decision (e.g. Aetna in Connecticut).

All analysis assumes the accuracy of the underlying government data. While every effort was made towards a comprehensive collection of plans, HealthPocket makes no representation that every plan within the individual insurance market or in an individual state was included in this study.

1 Some insurers had initially intended to participate on a state exchange and subsequently removed their filing. State exchanges may be run by the federal government, the state government, or a collaboration between state and federal governments.
2 HealthPocket was limited to the health insurance records for individual & family plans maintained by the department of Health & Human Services. Some carriers may not have been included within this dataset.
3 Erin Trish et al. "A Profile of Health Insurance Exchange Enrollees" Kaiser Family Foundation. March 2011. p.4. http://kaiserfamilyfoundation.files.wordpress.com/2013/01/8147.pdf. Accessed September 4, 2013.
4 A risk pool is the collection of potential insurance claims represented by the enrollees within an insurance company plan. If the risk pool has a tendency towards more frequent or more expensive claims then premiums have to be raised to maintain the financial viability of the health plan.
5 42 U.S.C. § 18032(c)(1). http://www.law.cornell.edu/uscode/text/42/18032.
6 See the American Academy of Actuaries overview of these risk mitigation mechanisms. Both reinsurance and risk corridor programs are temporary risk mitigation measures. “Risk Adjustment and Other Risk-Sharing Provisions in the Affordable Care Act.” American Academy of Actuaries Issue Brief. June 2011.
7 For example, see Consumer Reports review of NCQA quality rankings on health plans across the nation. "Health insurance rankings" ConsumerReports.org. November 2012. http://www.consumerreports.org/cro/magazine/2012/11/health-insurance-rankings/index.htm. Accessed September 4, 2013.