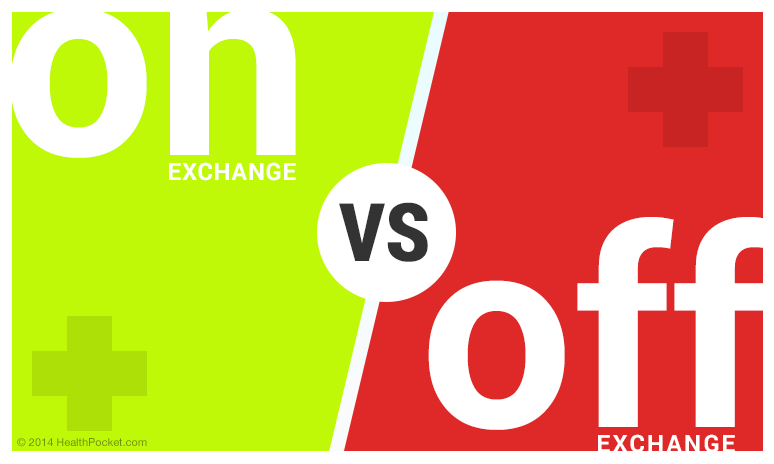 During the first Obamacare open enrollment period, several high-profile insurance companies such as Aetna and United Healthcare chose to sell plans off-exchange rather than on-exchange in many states. Based on higher-than-expected enrollment numbers reported by health insurance marketplaces (federal and state exchanges) in 2014 and positive projections for 2015,1 some of these off-exchange insurers are planning to participate in exchanges.

Before presenting the results, it is important to clarify the similarities and differences between exchange and off-exchange health plans. Plans sold off-exchange must offer the same essential health benefits as plans sold on the exchanges, but the primary difference between buying plans on- or off-exchange is that only on-exchange plans are eligible for government subsidies. These subsidies, however, are only available to certain income groups and then only if their monthly insurance premium exceeds a predetermined portion of their income. Cost-sharing reduction plans are also only available on exchange for low-income individuals. On-exchange health plans may also exhibit differences in cases where there are additional insurance rules that apply to health plans sold on a specific state exchange.

As noted earlier, the major off-exchange health plans were not necessarily offered in every state. Aetna sold individual and family health insurance plans on only seven states’ exchanges,4 while Cigna sold plans on the exchanges in five states.5 Both companies offered plans off of the exchanges in several other states. Assurant offered bronze plans off-exchange in all cities investigated, including all of the cities in which United Healthcare, Aetna, and Cigna offered plans. United Healthcare, Aetna, and Cigna offered bronze plans in 10, 12, and 8 cities respectively.

Overall the least expensive metal plans from United Healthcare, Aetna, Cigna, and Assurant were significantly more expensive than the least expensive metal plans available on state exchanges. Across the bronze, silver, and gold metal tiers, the least expensive plans offered by the four off-exchange carriers were over 40% more expensive on average than the least expensive plans on the exchanges.6 This suggests that if these carriers entered new exchanges in 2015, then they would not usually be competitive with the cheapest on-exchange plans unless they substantially lowered their current premiums. It is important to note that these premium costs do not factor premium subsidies, which are only available for on-exchange metal plans. During the first open enrollment period, 85% of people choosing a plan on an exchange had some form of financial assistance, such as premium subsidies or subsidized cost-sharing.7

Although the exchanges generally sold metal plans with cheaper premiums than the off-exchange carriers, it is entirely possible that some of the more expensive plans from the off-exchange carriers were a better value for typical consumers than the on-exchange plans. For consumers that anticipate no healthcare usage, the premium is the only relevant cost for their health plan. However for all other consumers, lower deductibles and lower coinsurance can make up for the cost of a higher premium. Even if one plan has more expensive premiums and cost-sharing than another plan, it is possible for the first plan to be more attractive to consumers if it has a broader network of providers. Before selecting a plan, consumers that wish to continue visiting their current healthcare provider should always check if their provider accepts the new plan.

Premium and deductible costs for the least expensive bronze, silver, and gold plans in the most populous city in each state were quoted on June 2, 2014 for a 40-year-old non-smoker purchasing a plan with effective date July 1, 2014. Costs for on-exchange plans are based on data from healthcare.gov and state-based marketplaces, while costs for United Healthcare, Aetna, Cigna, and Assurant were quoted from those carriers’ websites. Only the 39 cities with data for on-exchange plans and at least one of the four carriers were included in the analysis. Platinum plans were not included in the analysis since their availability was significantly less than the availability of plans in the three other metal tiers.

This analysis was written by Jesse Geneson, data researcher at HealthPocket, and Kev Coleman, Head of Research & Data at HealthPocket, with data analysis by Katherine Bian. Correspondence regarding this study can be directed to Mr. Geneson at jesse.geneson@healthpocket.com.