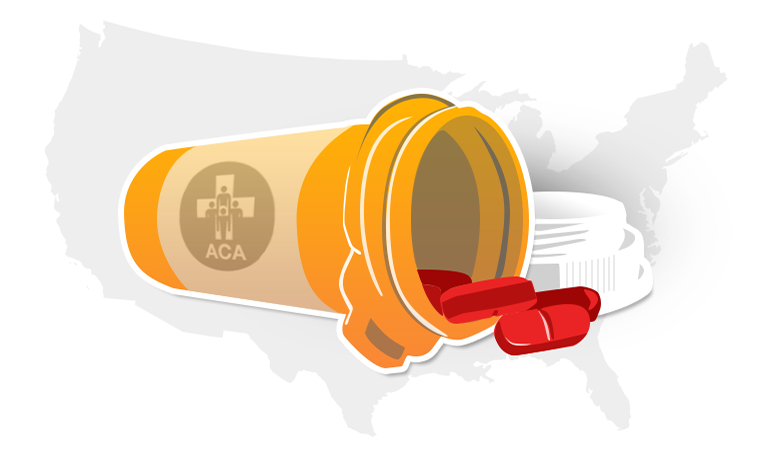 The Affordable Care Act (a.k.a. Obamacare) mandates that new qualified health plans provide prescription drug coverage as an Essential Health Benefit. However, which drugs are covered and at what cost is more vague. With roughly 70% of the population using prescription drugs1 during a typical year, how the Affordable Care Act will alter drug coverage is a critical issue for consumers.

HealthPocket examined publicly available rate filings for 2014 Obamacare Bronze Plans, Silver Plans, Gold Plans, and Platinum Plans to determine what consumers will pay for drugs. While these rate filings did not include formularies, i.e. the list of covered medications within each plan, many of them did include information regarding how much health plan members will pay for various categories of covered drugs: generics, preferred brand name drugs, nonpreferred brand name drugs, and expensive specialty drugs.

There are two additional facts about drug costs under the new Obamacare plans that are important to note within this analysis. First, many plans apply the deductible against drug costs so that the full price of drugs must be paid by the enrollee until the deductible is satisfied. Second, people whose income is at or below 250% of the Federal Poverty Level will qualify for cost-sharing reductions if they enroll in a Silver Plan. Cost-sharing reductions equate to lower dollar amounts for deductibles, copayments, and coinsurance fees. Additionally, the maximum amount a plan enrollee can pay annually on out-of-pocket expenses for covered medical services is lowered for those whose incomes are below a federally-specified threshold.

When compared to the current individual and family health insurance market, both the entry-level Bronze Plan and the higher tier Silver Plan will increase most out-of-pocket drug costs for consumers.2 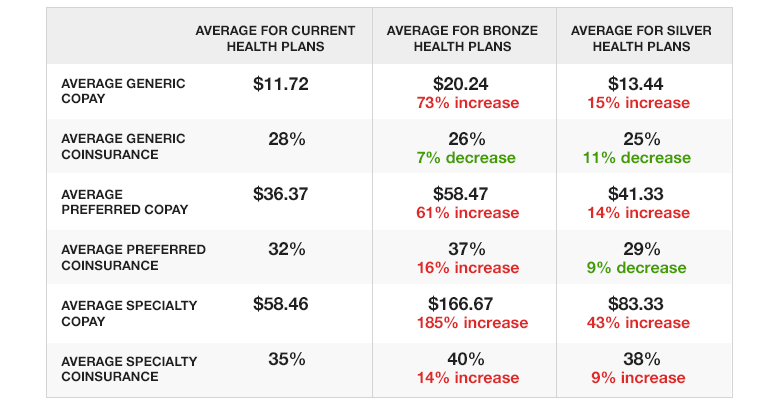 In most cases, the high-end Gold and Platinum plans average lower drug cost sharing than the averages for plans in the existing individual and family market.

Coinsurance is the most common method of cost sharing used for specialty drugs among Obamacare plans. Coinsurance fees are a percentage of the total price of the drug that is the responsibility of the enrollee to pay. For example, a 25% coinsurance for a $100 drug would result in a fee of $25 for the health plan enrollee.

To illustrate cost sharing for specialty drugs, the below table shows coinsurance rates for Copaxone, a medication used to treat multiple sclerosis (MS). The high cost of this drug has resulted in its ranking among the top 10 drugs in the U.S. as measured by dollar sales.4 An estimated retail cost for a 30-day supply for a 20 MG Injection Kit for the drug is $4,951. The out-of-pocket expenses assume that Copaxone is a covered drug for the health plan.

Cost-Sharing for Copaxone among Obamacare Plans

The Obamacare requirement to include drug coverage as a standard benefit will expand the population receiving insurance assistance with drug costs. In the existing individual and family health insurance market, nearly one out of five health plans do not include prescription drug coverage.6 However, consumers with existing drug coverage who enroll in Bronze or Silver plans will likely see their drug out-of-pocket costs increase assuming trends observed in public Obamacare rate filings persist.

Consumers who regularly take medication will need to examine their Obamacare plan options carefully. Even before considering cost-sharing rates, the consumer must confirm that their drugs are covered by the health plan. Uncovered drugs are not subject to any limitations on annual out-of-pocket costs.7 The Affordable Care Act requires only one drug per category and class be covered within a health plan formulary, though the benchmark plan chosen the consumer’s state can increase that number on a per category/class basis.8 Depending on the state, the minimum number of drugs to be covered by the prescription drug benefit varies from 485 medications to 1,070 medications.9 Additionally, a particular drug’s tier assignment to “preferred brand name drug,” “non-preferred brand name drug,” and “specialty drug” is left to the discretion of the health plan.10 Consequently, a drug that is classified as a “preferred brand name drug” in one plan may be a more expensive “non-preferred brand name drug” in a different plan. All of these factors suggest that consumers should do their homework prior to enrolling in a health plan.

According to Consumer Reports, Americans already averaged $758 in drug outof-pocket costs for 2012.11 Higher out-of-pocket costs for drugs in Obamacare plans may incentivize some enrollees to explore lower cost 90-day mail order supplies for those medications they use regularly. Additionally, pharmacy-based drug discount programs may be explored as another tactic to control drug expenditures. Drug purchases through these pharmacy-based drug discount programs typically are not counted against the health plan’s annual limit on out-of-pocket spending. However, it is unclear whether Obamacare plans in the individual and family market will receive the same one-year exemption in 2014 as small group plans that allow separate limits for drugs and medical costs, potentially doubling out-of-pocket exposures. These discount drug programs can be very affordable and are available at major pharmacy chains. For example, Walmart offers a variety of generic drugs for $4 for a 30-day supply and $10 for a 90-day supply.12 Walgreens has a similar program offering many generics at $5 for a 30-day supply and $10 for a 90-day supply.13

Drug costs assume on-formulary drugs of a 30-day supply obtained through an in-network pharmacy provider. Since data was collected from rate filings, there is the possibility of plans being rejected by the individual state department of insurance reviewing the filing.

This survey analysis was completed by Kev Coleman, Head of Research & Data at HealthPocket.com. Correspondence regarding this study can be directed to Mr. Coleman at kevin.coleman@healthpocket.com. Zev Beeber assisted with data collection.