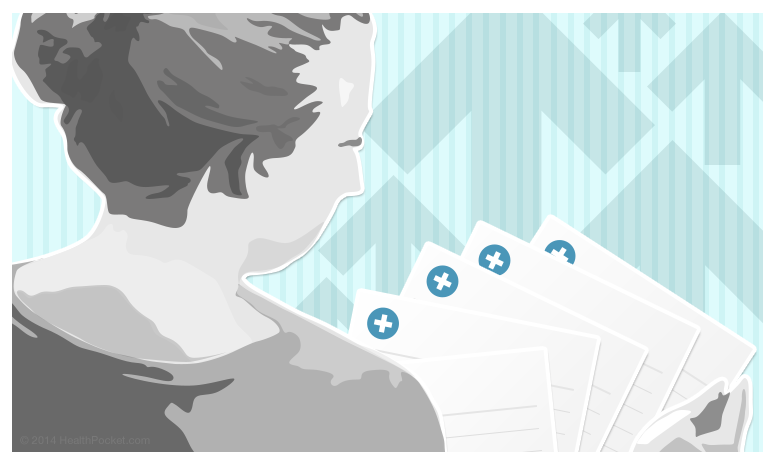 Effective 2014, the Affordable Care Act (ACA) required premiums for the same health plan to vary only on an applicant’s age, smoking status, geographic location, and number of people being covered. Applicants could not be rejected due to health status and premiums could not be ‘rated-up’ (i.e. increased) over the standard level for persons sharing the same age, smoking status, and region. One of the questions raised by the ACA is whether women and men as well as the old and young experienced similar changes to their health insurance premiums due to the law.

In order to answer this question, HealthPocket examined the average 2014 ACA premiums for non-smoking men and women ages 23, 30, and 63 and then compared these averages to those in the 2013 pre-reform individual health insurance market. The analysis included both on-exchange and off-exchange individual market plans available in the two largest metropolitan regions in each state. Using government premium data from 2013 and 2014, the premiums for all available health plans were gathered and averaged within a demographic segment (e.g. 30 year-old women).

Average Monthly Premium Costs Before and After the Affordable Care Act 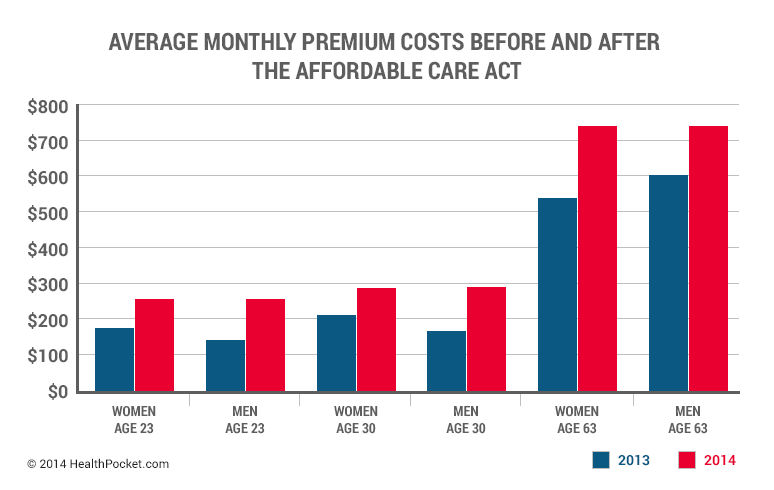 Unsubsidized premiums were found to have increased from 2013 to 2014 across all groups examined. Average premium costs for 23-year-old women and men increased 44.9% and 78.2% respectively after the ACA’s implementation. For 63-year-olds the increase was 37.5% for women and only 22.7% for men. Young men had the highest premium increase (78.2%) among the groups examined while senior men had the smallest increase (22.7%) though senior men had the highest baseline premium in 2013 against which their 2014 increases were calculated.

Average premiums in each state varied widely across the United States. New York had the highest average monthly premiums in 2014 for 23- and 30-year-olds ($460) because premium rates in New York are constant between the ages of 21 and 64.1 Vermont, which also had constant premium rates, had the lowest average monthly premium for 63-year-olds ($433).

Hawaii had the lowest average monthly premiums for both 23- and 30-year-olds ($190 and $216 respectively), while Virginia had the highest average monthly premiums for 63-year-olds ($1,101). A contributing factor to Virginia’s premium averages was the availability of special health plans in the state (usually costing over $1,500 a month) that covered gastric bypasses and bariatric surgery.2 Gastric bypasses and bariatric surgery are among the most frequent medical services excluded by Affordable Care Act health plans.3

Average Monthly Premium Costs in 2014 by Age and State

The examination of unsubsidized health insurance premiums is multifaceted and prone to political misuse. The analysis of pre- and post-Obamacare health insurance in the individually purchased health insurance market demonstrates a clear increase of average premiums across age groups and both sexes. While the degree of increase varied by age and sex, the occurrence of an increase did not. However, the degree to which the cost of consumers’ premiums increased is a more complicated matter than suggested by the premium data.

First, the Affordable Care Act has prohibited the rejection of health insurance applicants based on medical history or health status. As HealthPocket’s earlier research demonstrated, in the pre-reform market approximately one-out-of-five health insurance applications were rejected.4 While some portion of the rejected applicants may have applied to a different health plan and obtained coverage, it is likely that many were unable to obtain coverage in the traditional individual insurance market. In such cases, the comparison may be a 2014 premium versus no premium in 2013 when insurance could not be obtained.

Health insurance premium subsidies are a problematic consideration as well. Premium subsidies are only available to those making between 100% and 400% of the Federal Poverty Limit (FPL),6 so their expense reduction is not available to all consumers. Moreover, even within their own prescribed income limits they are not necessarily available because a health plan’s premium may not equal the percentage of income needed to trigger a subsidy. A previous HealthPocket study of eight cities across the U.S. that found that income range for young adults between 18 and 34 was 41% than the income range dictated by the Affordable Care Act.

“On average the maximum income at which young adults could qualify for a premium subsidy was $31,744. This average is $14,216 below the highest subsidy-eligible income stipulated by the Affordable Care Act.”7

Another important consideration in the discussion of subsidized premiums is that the subsidized portion of the premium still must be paid by the government through the money it collects from the nation. In other words, the subsidized costs of health insurance do not disappear but instead change payers.

There are several factors that have contributed to higher premium costs in 2014. With the new prohibition on application rejection due to health, insurance plans in the individual market expanded its number of enrollees with expensive medical conditions. Additionally, the average health plan benefit package also expanded. Under the Affordable Care Act, all health plans on the individual market were required to cover ten categories of Essential Health Benefits, including pediatric oral and vision care, as well as maternity and newborn care. In the 2013 pre-reform market, 92% of plans excluded coverage for children’s dental check-ups, 87% excluded children’s eyeglasses, 67% excluded delivery, and 64% excluded prenatal and postnatal care.8 Less than 2% of pre-reform plans provided all of the essential health benefits.9

2014 premium cost averages included both on- and off-exchange plans that were available to 23, 30, and 63-year-olds in the two largest metropolitan regions in each state, except for Vermont. Vermont premium costs were obtained from the Vermont Health Connect website.10 Plans were limited to the individual and family insurance market. Medicare, Medicaid, and employer-based health plans were not included in this study.

This analysis assumes that the underlying government data is accurate. While every effort was made to use a comprehensive collection of plans, HealthPocket makes no representation that every plan in the individual insurance market or in an individual state was included in this analysis. Percentages are rounded according to standard industry practices.