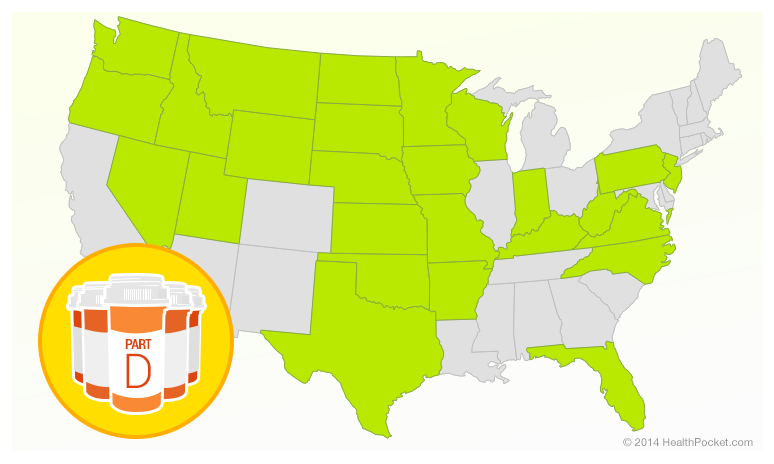 Medicare Part D, the prescription drug benefit for seniors and the disabled, requires insurance policies to cover at least two drugs in most medication categories1. However, which drugs are covered within a given medication category is left to the discretion of the company providing the insurance plan. Drugs that are covered by a specific Part D plan benefit not only from reduced out-of-pocket costs but also protections from catastrophic financial expenses. Uncovered drugs, on the other hand, carry with them no protections with respect to catastrophic out-of-pocket costs.

While it is generally known that uncovered drugs are paid for completely out-of-pocket, it is not widely understood that the same drug covered by two different Medicare Part D plans can charge different amounts. These differences in drug charges (whether copayments or coinsurance fees) can significantly affect the economic value of the Part D plan for someone on Medicare.

HealthPocket analyzed the lists of covered drugs (i.e. formularies) for all 2014 Medicare Part D insurance plans sold in the United States to evaluate their drug coverage. For each of the top 50 drugs2 sold in the U.S. and for each Medicare Part D plan, HealthPocket estimated the amount a beneficiary would pay for premiums and prescriptions, and then combined the results across all 50 drugs for each plan.

HealthPocket also noted the number of top 50 drugs covered by the plan. When a particular drug was uncovered, an estimated retail price for that drug was used within the plan’s combined costs for the top 50 drugs. For covered drugs, the plan’s cost-sharing for the medication was used and assumed one prescription fulfillment per month for 12 months.

* Based on a default dosage & quantity for each drug prescription filled once a month for one calendar year. If a drug was uncovered, then an estimated retail price was used for the drug cost. Cost estimates were performed separately for each of the 50 drugs and then combined together for a single total cost.

Both premiums and cost-sharing (including deductibles, copayments, and coinsurance) should be taken into consideration when evaluating Medicare Part D options. Additionally, consumers are advised to watch for drug restrictions that could potentially affect them. In some cases, a Part D plan may require a doctor to request and receive approval for a specific drug prescription before the plan will contribute towards that drug’s costs. In other cases, a plan may require a beneficiary to try a less expensive drug and establish it is insufficiently effective before the plan will approve a very expensive drug.

The list of top 50 most popular drugs in the United States was based on the units of prescription drugs sold in Q4 of 2013: “U.S. Pharmaceutical Sales - Q4 2013” Drugs.com. Last updated February 2014. http://www.drugs.com/stats/top100/units. The default quantity/dosage amount for each drug used in this study was taken from the default quantity/dosage amounts displayed on Medicare.gov for each of the 50 drugs investigated.

All drug cost-sharing estimates assume the use of an in-network pharmacy. In cases of a multi-tier pharmacy network, a pharmacy in the preferred tier with the lowest cost-sharing was used.

This analysis was written by Kev Coleman, Head of Research and Data at HealthPocket, with primary research performed by Jesse Geneson, Data Researcher at HealthPocket, and additional data analysis performed by Katherine Bian. Correspondence regarding this study can be directed to Mr. Geneson at jesse.geneson@healthpocket.com.

1 “Each category or class must include at least two drugs (unless only one drug is available for a particular category or class, or only two drugs are available but one drug is clinically superior to the other for a particular category or class), regardless of the classification system that is utilized. The two drug minimum requirement must be met through the provision of two chemically distinct drugs.” “30.2.1 - Formulary Categories and Classes” within chapter 6 (Rev. 10, 02-19-10) of the Pub. 100-18 Medicare Prescription Drug Benefit Manual. Medicare also requires that all, or substantially all, of the drugs in the following 6 drug classes be covered: Antidepressants, antipsychotics, anticonvulsants, antineoplastics (used by cancer patients), immunosuppressants (used by transplant patients), and antiretrovirals (used by patients with HIV).
2 The list of top 50 drugs was based on units of drugs sold in Q4 of 2013. “U.S. Pharmaceutical Sales - Q4 2013” Drugs.com. Last updated February 2014. http://www.drugs.com/stats/top100/units. Accessed May 9, 2014.
3 Despite being fourth on the list of the top 50 drugs by units sold, OneTouch Ultra was not included in this study since it is a blood glucose monitor and not a prescription drug. OneTouch Ultra is covered by Medicare Part B, but not by Part D. http://www.onetouch.com/articles/medicare-coverage-for-diabetes-supplies