Average premiums for both products are down compared to 2017 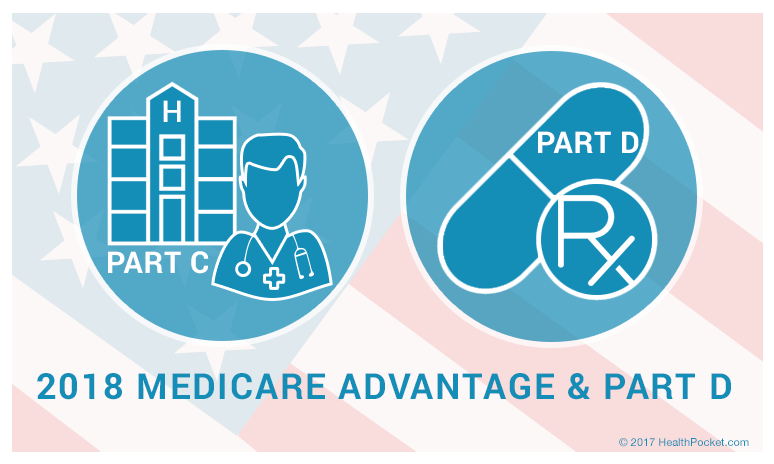 In August of this year, the Centers for Medicare & Medicaid Services predicted that 2018 Medicare Part D premiums would decrease for 2018.5 HealthPocket’s comparison of Part D monthly premiums found that the national average premium in 2018 of $52.36 is slightly less expensive than the average premium of $53.22 in 2017.6 The average deductible in 2018 is $243.55, which is 7 percent more expensive than 2017’s average deductible of $227.43.

Despite the encouraging premium news at the national level, HealthPocket found significant state-level variances from the national averages for premiums and drug deductibles.

Prescription drug deductible comparisons were not a clear cut issue for Medicare Advantage plans in 2018. There were instances where deductible amounts were missing within the government data. From a methodological perspective, $0.00 deductibles were calculated into the averages but blank cells were not.

In 2018, the maximum allowable drug deductible for both Medicare Advantage and Part D plans is $405.7 Plans do have the flexibility to offer a drug deductible below that maximum amount. HealthPocket found that the lowest average drug deductible at the state-level was $49.02 for Pennsylvania. The most expensive average deductible, given the limitations of the underlying data, was Montana at $359.67.

When comparing state averages for monthly premiums among stand-alone Medicare Part D drug plans, Delaware, Maryland, and the Washington D.C. region tied for the lowest in 2018. The average Medicare Part D premium in these three regions was $40.98. This average was 22 percent lower than the national average of $52.36. In 2016, the state of Hawaii had been the state with the lowest average Part D premium. In 2018, the two states with the highest average Part D premium were Idaho and Utah ($65.52).

The below table provides a state-by-state comparison of the average premiums and deductibles of 2018 Medicare Part D plans.

As Medicare beneficiaries prepare to shop this Open Enrollment Period for new insurance plans, they should remember that other plan attributes can be just as important as premiums and deductibles. For example, healthcare provider networks and caps on annual out-of-pocket costs are especially important to examine among Medicare Advantage plans. Likewise, covered drugs, drug cost-sharing, and limitations on drug access are important to examine on both Part D and Medicare Advantage plans.

Premiums and deductibles for Medicare health and drug plans were obtained from the 2018 MA Landscape Source Files and 2018 PDP Landscape Source Files published by cms.gov on September 29, 2017 (https://www.cms.gov/Medicare/Prescription-Drug-Coverage/PrescriptionDrugCovGenIn/index.html?redirect=/PrescriptionDrugCovGenIn/02_EnrollmentData.asp last accessed on October 2, 2017). In instances where the government data lack a premium or deductible value for an individual plan, the absent value was not factored into averages.

Premiums and deductible averages are retail and do not include any assumptions about additional government aid. Part D plans and Medicare Advantage plans for all 50 states and Washington D.C. were included in the study. Part D plans and Medicare Advantage plans from U.S. territories were not included. Sanctioned plans and Special Needs Plans (SNPs) were not included in the analysis. Additionally, premium averages and deductible averages excluded plans where the data was not present (i.e. blank) in the government landscape files. No adjustment was made for market share of each plan. All analysis assumes the accuracy of the underlying government data.

This analysis was written by Kev Coleman, Head of Research & Data at HealthPocket with data collection performed by Michael Bass. Correspondence regarding this study can be directed to Mr. Coleman at kevin.coleman@healthpocket.com.