Even for Drugs Included on a Plan's Formulary, Access to Drugs is Often Limited 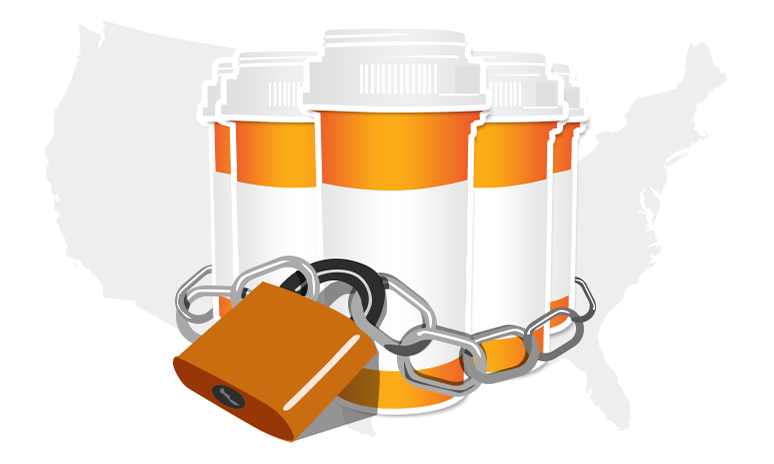 Since its inception in 2006, the Medicare prescription drug benefit has become a crucial part of the Medicare program. Private insurers under contract to Medicare provide the drug benefit, and enrollees can select from among many plans.1 Drug plans are not standardized with respect to the number of drugs available through a plan, and restrictions govern drugs that are included in a plan. HealthPocket's research shows that plans vary widely in the number of medications covered and in the percentage of medications subject to restrictions. These are basic features of a prescription drug plan that can be less obvious to consumers, but may have a significant impact on them.

Each plan has a formulary that sets out the drugs covered by the plan and the cost-sharing tier on which the drug sits. The formulary is the basis for estimating how much an enrollee will pay out-of-pocket for medication in the course of the plan year based on the drugs he or she expects to take. HealthPocket's Medicare drug pricing tools follow this approach.

The most important thing a Medicare enrollee needs to do during Annual Enrollment is to make sure the drugs they take are on a plan's formulary. If a drug is not on the formulary, the enrollee will be responsible for the entire cost, and those expenditures will not be credited toward the plan's total out-of-pocket spending limit. In this case the enrollee could try to obtain an exception from his or her plan,4 but failing that would face financial exposure equal to the full price of the medication.

Medicare Drug plans are required by the Centers for Medicare and Medicaid Services (CMS) to include at least two drug options in each of 148 drug categories.5 In addition, nearly all drugs in six classes, including antidepressants and antipsychotics have to be covered.6 While all prescription drug plans are subject to the same regulatory framework, they differ from one another with respect to how many drugs they select for their formulary.

The chart below shows average, minimum and maximum number of drugs within the formularies for each prescription drug plan type. 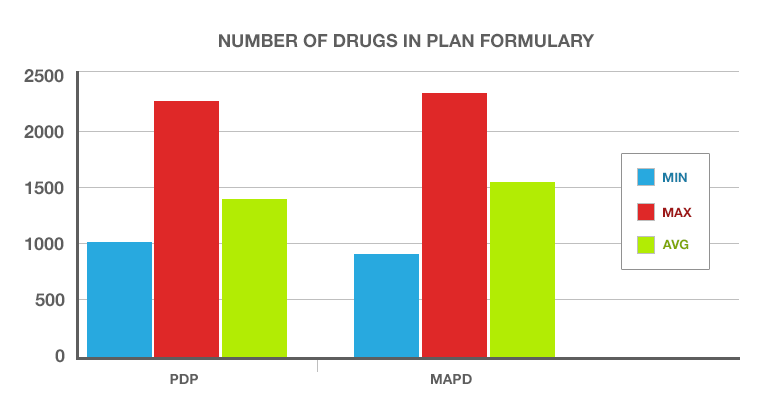 In each category some plans have twice the drug inventory within their formularies than other plans. That alone does not make the large inventory plan better than the small inventory plan, but it serves as a caution to consumers that they must use tools during annual enrollment that give them confidence that the drugs they take will be on a plan's formulary for the upcoming year.

Restrictions for Drugs Within a Formulary

Consumers will find that even with their medication on a plan's formulary they may still need to pass through hoops in order to get their prescription filled. The plans are designed to keep costs down by monitoring utilization and creating carrots and sticks for consumers to gravitate toward the lowest cost form of medication that works for them. The hoops include:

Drug plan restrictions are shown on the following chart:

Some of the drugs subject to limitations are frequently prescribed. A Kaiser Family Foundation study found that four drugs (Celebrex, Cymbalta, Nexium and Lyrica) had a prior authorization requirement for at least 10 percent of PDP enrollees.8 While designed as a cost saving measure, research also shows a high cost to implementing the plan restrictions. One study indicated a cost for prior authorization in the time taken to go through these steps to amount to $40.75 per incident.9

In reviewing medication restrictions within plans, one plan provider stood out for its lack of restrictions. Kaiser plans had no quantity limits, no step therapy requirements, and only 3.5 percent of its drugs were subject to prior authorization. It is plausible that strong coordination of medical care, the heavy use of data and a commitment to electronic medical records could alleviate the burdens to consumers resulting from the restrictions. The Kaiser example is a cause for optimism that there may be workable alternative approaches to drug utilization management.

Medicare eligible consumers should confirm each year during the Medicare annual enrollment period that they enroll in a drug plan that includes all of the drugs they take on that plan's formulary. Consumers also should confirm that their chosen plan doesn't include unreasonable obstacles to obtaining drugs that are on their formularies. The obstacles may amount to a slight inconvenience, or they may become time consuming and create a delay in receiving medication or require someone to start with a different drug.

The 2014 Plan annual enrollment period is October 15 to December 7, 2013. Consumers can compare all Medicare drug plans and their formularies by using the tools on HealthPocket.com. Additional information regarding drug restrictions can be found on Medicare.gov.

Drug information was taken from the Medicare public use file that includes number of drugs on each plan's formulary as well as restrictions, including quantity limits, prior authorizations and step therapy. The information was separated by Medicare Part D prescription drug plans and Medicare Advantage plans with prescription drugs. The formulary filings of the health plans could include more than one of their plans. The data was not adjusted for market share.

1 In fact research showed that only about 5% of enrollees were found to have selected the least expensive plan in 2009. See: http://content.healthaffairs.org/content/31/10/2259.full.html
2 The Medicare Advantage category includes Special Needs Plans that are designed for people eligible for Medicare and Medicaid, people with serious chronic illnesses and people in institutional settings.
3 http://www.medpac.gov/documents/reports/mar12_ch13.pdf?sfvrsn=0
4 The appeal process is described here: http://www.medicareinteractive.org/page2.php?topic=counselor&page=script&slide_id=1580
5 http://www.medicareadvocacy.org/medicare-info/medicare-part-d/#covered%20drugs
6 https://aspe.hhs.gov/execsum/issues-design-and-implementation-drug-formularies-and-therapeutic-classes
7 See explanations of restrictions in Medicare document: http://www.medicare.gov/Pubs/pdf/11136.pdf
8 http://kaiserfamilyfoundation.files.wordpress.com/2013/01/8357.pdf
9 http://www.policymattersjournal.org/krieger.html