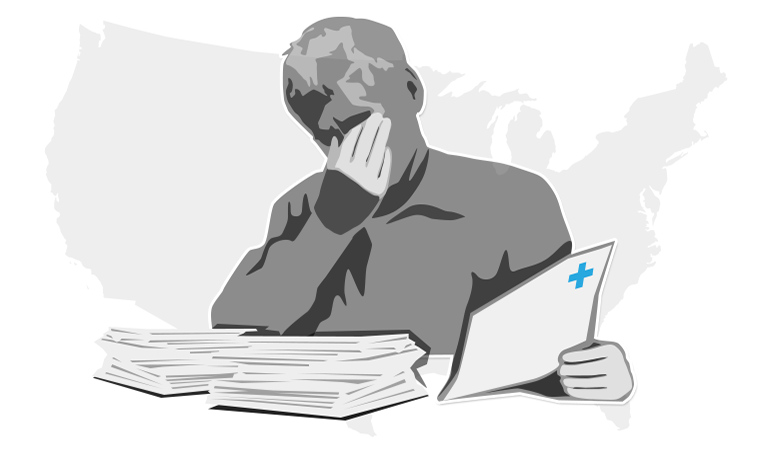 The Affordable Care Act (“ACA” aka “Obamacare”) will bring new opportunities and challenges to health care consumers. With more people receiving coverage on the individual market, they will need to find ways to select health plans that meet their needs. Consumerism in the Medicare market predates Obamacare with choices of Medicare Advantage and Medicare Prescription Drug plans. In light of the movement toward individual choice, HealthPocket decided to look at the effect of brand awareness on decision making and focused on one well known and widely used branded Medicare Advantage program. We found that plans bearing the AARP brand in the Medicare Advantage market on average fall short of the industry in two measures of plan quality.

This report looked at 578 Medicare Advantage contracts with a particular focus on the government’s star rating and the overall opinion of the plan based on a survey of enrollees in that plan. The goal of this research is to compare how one of the strongest brands in the industry, AARP and its endorsed carrier, UnitedHealth, perform in these high level quality metrics compared with the universe of plans.

Consumers have complex choices to make when deciding between traditional Medicare and Medicare Advantage. Once they conclude that an Advantage plan can best meet their needs, they then have to navigate an array of options available to them. There is much research regarding the paradox of choice and consumer decision making generally.4 One specific study of the Medicare Advantage market showed the market within a particular region generally grows when choice is limited to fewer than 15 plans, but could in fact shrink if choices become too numerous.5 The article expressed particular concern that beneficiaries with cognitive challenges could miss better plan opportunities because of having too much choice.

Researchers are finding evidence that the star ratings are beginning to move market share toward the higher rated plans.9 However, HealthPocket also wanted to see the effect a brand might have on Medicare Advantage market share. Because choices can be so numerous in the Medicare Advantage market, a consumer might fall back on a basic comfort level that a known and trusted brand can provide a good choice. Research also indicates that some older people select from among fewer choices based on brand awareness.10

UnitedHealth is the leading market share carrier for Medicare Advantage, with a reported market share of nearly 21 percent in February 2013.11 Humana has the second largest market share at nearly 17 percent. AARP branded plans are described on the AARP Member Advantages website12 as being structured the following way: “The AARP® MedicareComplete® plans are insured through UnitedHealthcare Insurance Company and its affiliated companies, a Medicare Advantage organization with a Medicare contract. UnitedHealthcare Insurance Company pays royalty fees to AARP for use of its intellectual property.” 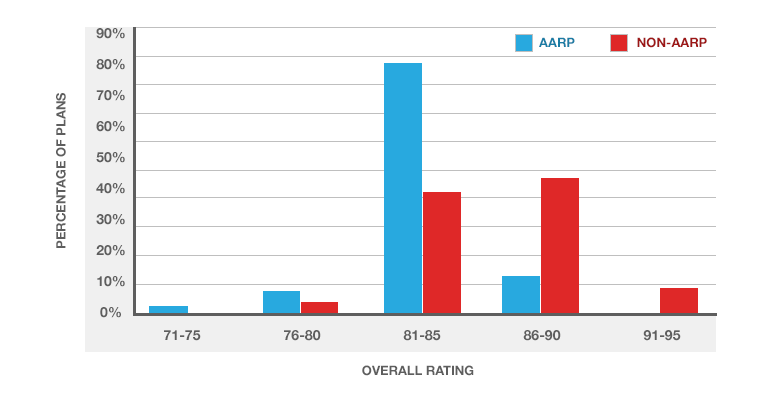 The industry average for all plans excluding AARP for this response was 86 percent of members rated the plan highly, while AARP’s plan contract average was 83 percent. Perhaps more importantly, the AARP plans top out at 86 percent, while the rest of the industry has 62 plan contracts at 90 percent or higher and tops out at 95 percent.

A lot of factors drive consumers’ decisions regarding their health plan purchase. They will be heavily motivated by cost, including premiums, copays, deductibles and maximum out-of-pocket expenses. Many will want to make sure that key physicians participate in their plan and that specific health care facilities are in a plan’s network. Therefore, quality should play one important role in a mix that contains other factors.

At least with respect to Medicare Advantage quality scores and consumer satisfaction data, the AARP branded plans are not top performers. Yet they are successful in achieving strong market participation.

Fortunately for consumers CMS, the Medicare plans’ regulator, has done an excellent job of releasing data to the public and on its own plan finder website. This allows easier comparison of plans and brings plan quality into the mix for consumer decision making. Being able to see actual ratings and customer satisfaction might provide enrollees sufficient peace of mind to look beyond the brand in determining health plan selection.

Data on attrition, complaints and star ratings were taken from 2013 CMS Medicare Part C Performance Data tabulations.14 The data was based on contract numbers, which can represent multiple plans. UnitedHealth contract numbers were compared against Medicare Advantage plan landscape data to determine which UnitedHealth plans carried the AARP brand. Medicare Advantage contract plans that were either too new or had insufficient data to a have star rating or overall plan rating were eliminated from this review. The remaining plans were not adjusted for market share.15 This study did not consider premium costs or other plan details.

1 Kaiser Family Foundation report: http://kff.org/medicare/issue-brief/medicare-advantage-2013-spotlight-enrollment-market-update/
2 Research from AHIP: http://www.ahip.org/TrendsMedigap2012PDF/
3 Particularly relevant to this report is Chapter 10 of Nudge, a book by Richard Thaler and Cass Sunstein, which reviews decision making at the onset of the Medicare Part D program
4 See Health Affairs article: http://content.healthaffairs.org/content/early/2011/08/16/hlthaff.2011.0132.abstract
5 A similar rating system applies to Part D prescription drug plans
6 http://www.medicare.gov
7 See this example
8 See Journal of American Medical Association: http://jama.jamanetwork.com/article.aspx?articleid=1557733
9 See: “The Impact of Age on Brand Choice,” Chapter 9 of The Aging Consumer: Perspectives From Psychology and Economics
10 http://www.aarphealthcare.com/medicare/medicare-advantage.html#
11 http://www.cms.gov/Medicare/Prescription-Drug-Coverage/PrescriptionDrugCovGenIn/PerformanceData.html
12 UnitedHealth suggested in an administrative proceeding that some plans with a high concentration of special needs populations could affect their overall scores. See this Hearing Officer Decision.