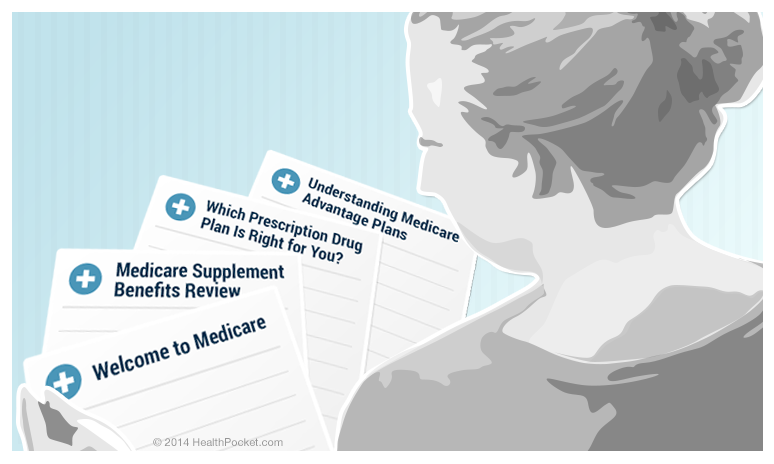 Which option produces the lowest costs when considering both premiums and out-of-pocket costs? Using government data, HealthPocket assembled a representative profile of healthcare and prescription drug use for a Medicare- aged individual.

*HealthPocket selected a best selling drug within each of the drug categories most commonly used by the elderly.4

Using the above healthcare profile, HealthPocket estimated the total annual premium and out-of-pocket costs for the three Medicare coverage options.

Before reviewing the annualized cost comparisons, it is important to review the salient features of the three Medicare insurance scenarios in order to provide context for their respective cost estimates.

Medicare Parts A and B, sometimes referred to as “Original Medicare,” usually covers 80% of healthcare costs with the remaining 20% paid by the Medicare patient. However, both Part A and Part B have a deductible. The Part B deductible is $147 a year in 2014. The Part A deductible is more complicated. A Medicare beneficiary faces a hospitalization deductible of $1,216 per benefit period. A benefit period begins when a Medicare enrollee is admitted as an inpatient to a hospital or skilled nursing facility. The period ends when this enrollee has not been an inpatient at a hospital or skilled nursing facility for 60 continuous days. Consequently, a Medicare enrollee can face multiple benefit periods, and multiple Part A deductibles, within a single calendar year.

For the Medigap scenario, Medigap Plan F was selected. Plan F is the most popular8 of the 10 standardized plan designs for Medigap insurance (also known as Medicare Supplement insurance). Plan F is also the most comprehensive of the various Medigap plan designs and is intended to cover all the standard out-of-pocket costs for covered Medicare services except those related to prescription drugs. For example, the deductible amounts for Medicare Part A and B services are paid by Plan F as well as various copayments and coinsurance fees for doctor visits, hospice care, or foreign travel emergency care.

Using the lowest possible Plan F premium across eight cities, the average monthly cost for a Medigap Plan F was $126.50.9 In order to enroll in a Medigap Plan F, a person must also be enrolled in Medicare Part A and Part B. Consequently, the $104.90 premium for Medicare Part B must be paid alongside the Medigap premium every month. As was the case for Original Medicare Parts A & B, a separate Medicare prescription drug plan must be purchased alongside a Medigap plan in order to obtain medication coverage. The same Medicare drug plan was assumed for the Medigap scenario as had been assumed for the Medicare Parts A & B scenario. This added an additional drug coverage premium on top of the Plan F premium and Medicare Part B premium that must be paid every month for this coverage option.

As was the case for Medicare Parts A and B, Medigap Plan F is not tied to a network of healthcare providers. Any doctor who accepts Medicare patients will typically accept Plan F coverage. A Medicare prescription drug plan, on the other hand, normally has a network of pharmacies that must be used for the plan to provide drug coverage and cost-sharing.

When combining all money spent on insurance premiums as well as out-of- pocket costs, Medicare Advantage was the clear winner. Its annualized cost estimate was 19% less than Original Medicare Parts A & B combined with a prescription drug plan. The comparison with Medigap was more dramatic. Medicare Advantage costs were estimated to be 45% less than the estimate for Medigap Plan F combined with Medicare Parts A & B and a prescription drug plan. While the Plan F option left the Medicare enrollee with no medical out-of-pocket costs, this option still had out-of-pocket costs associated with drug coverage. Additionally, the Plan F option’s lower out-of- pocket costs did not compensate for its higher overall expenses for monthly premiums. 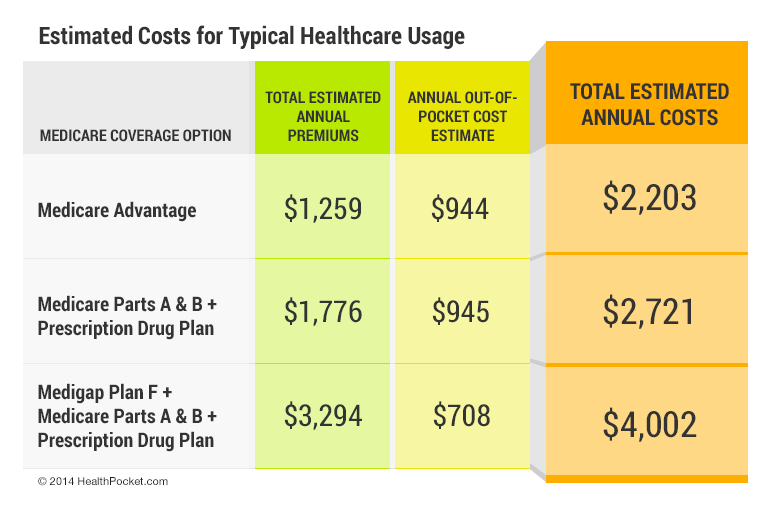 Original Medicare has an advantage over Medicare Advantage with respect to its relative lack of network restrictions. This gives Original Medicare an advantage in many rural areas as well as for individuals whose medical conditions require a particular doctor or hospital outside the networks of local Medicare Advantage plans. The benefits associated with little network restrictions holds true for Medigap Plan F.14 Additionally, Plan F’s protection against medical (not drug) out-of-pocket costs is superior to Medicare Advantage but that protection comes with a heavy premium burden that may not be sustainable for an elderly person long-term if they live on a fixed income with limited savings. Moreover, for HealthPocket’s profile of a typical Medicare enrollee, Medigap Plan F’s medical out-of-pocket savings were inadequate to offset the premium expenses associated with this option resulting in Medicare Advantage being 45% less expensive annually. The gap between Medicare Advantage and Medigap would have been even larger if HealthPocket had used the average premium weighted by enrollment for Plan F, which was $171 in 2010.15

Medicare decisions are not easy and are closely tied to individual health circumstances as well as local healthcare providers. Before enrolling in a private Medicare insurance plan, whether Medicare Advantage, Medigap, or a prescription drug plan, people should confirm:

Failure to confirm the above items can result in exceedingly high out-of-pocket expenses regardless of the money spent on insurance premiums.

The three combinations of Medicare plans examined in each city were:

According to a brief by the Kaiser Family Foundation, the Medicare Part D plan with the highest market share in 2013 was the AARP MedicareRx Preferred plan. This plan was used in each city to estimate costs for a Part D plan.22 This plan had a deductible of $0 and copayments of $3, $7, and $40 for one-month supplies of Tier 1, Tier 2, and Tier 3 drugs respectively. In this plan Metoprolol Tartrate, Furosemide, and Crestor were in tiers 1, 2, and 3 respectively.23

According to a different brief by the Kaiser Family foundation, UnitedHealthcare had the greatest market share (by firm) in terms of Medicare Advantage plans, and their HMO plans had the greatest enrollment by plan type. The same brief found that 55% of beneficiaries in MA-PD plans were enrolled in a zero-premium MA-PD plan in 2013.24 The cost estimates for MA-PD plans used UnitedHealthcare’s AARP MedicareComplete HMO plans in each city with $0 premiums, $0 deductibles, and no additional coverage during the coverage gap beyond standard cost-sharing.25 Each plan had Metoprolol Tartrate in Tier 1, Furosemide in Tier 2, and Crestor in Tier 3.26 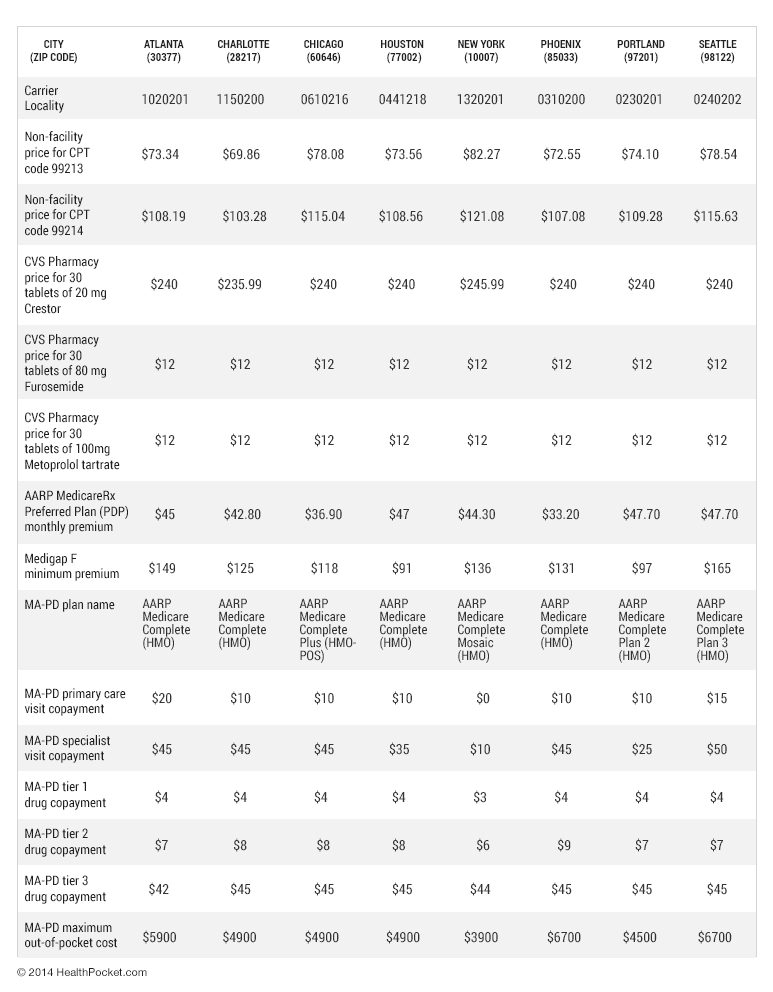