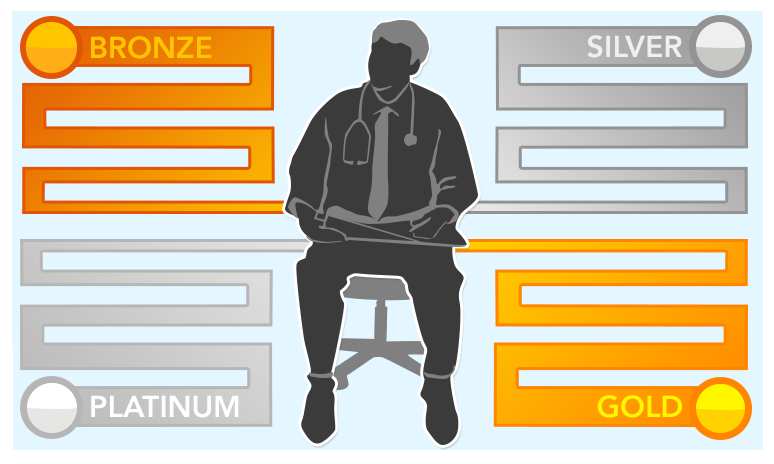 Health insurance has changed and insurance shopping must change with it. The fundamental distinctions among the new Affordable Care Act health plans are actuarial, i.e. the percentage of enrollee medical costs paid by the health plan. Consequently, consumers must carefully consider the out-of-pocket costs under each of the new metal plans alongside monthly premiums in order to pay the least amount of money on healthcare annually. 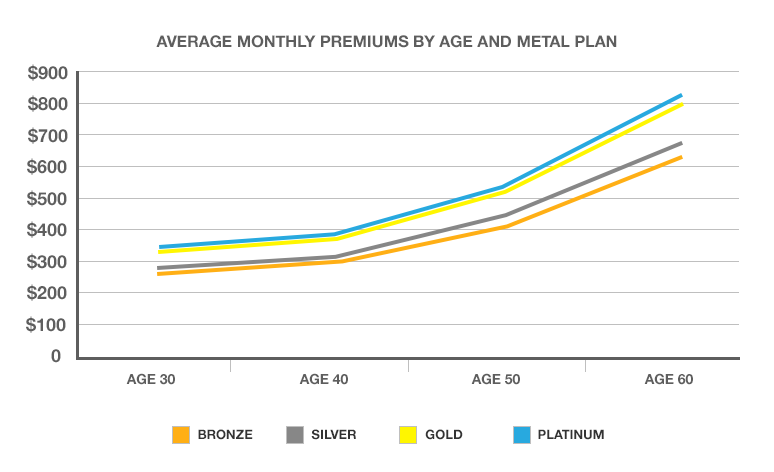 With respect to age, the difference between 50 and 60 year old enrollees had the largest premium difference within the same metal plan category.

Entry-level Bronze plans are required to cover only 60% of covered medical expenses for a standard enrollee population, while Silver plans cover 70%, Gold plans 80%, and Platinum plans 90%.1 Given that each metal plan represents a different percentage of medical costs paid by an insurer,2 cost-sharing expenses (i.e. deductibles, copayments, and coinsurance fees) vary among the metal plans with Bronze plans having the largest out-of-pocket costs and Platinum plans having the lowest out-of-pocket costs.

Using Premiums & Healthcare Use to Select a Plan 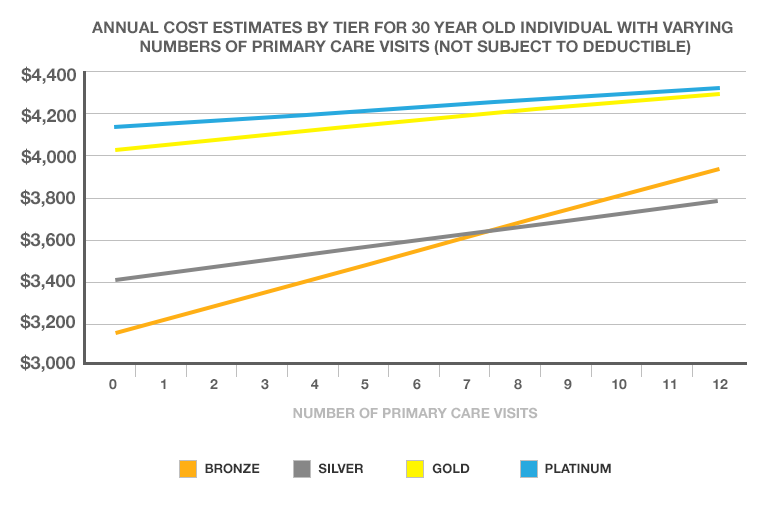 In the above scenario, each metal effectively covered a higher percentage of doctor visit costs than its actuarial value would dictate: 70% for Bronze plans, 86% for Silver plans, 89% for Gold plans, and 93% for Platinum plans.7

If the 30 year-old individual visited a specialist between four and twelve times a year and their primary care physician four times, then the total annual costs would be lowest with the Platinum plans. 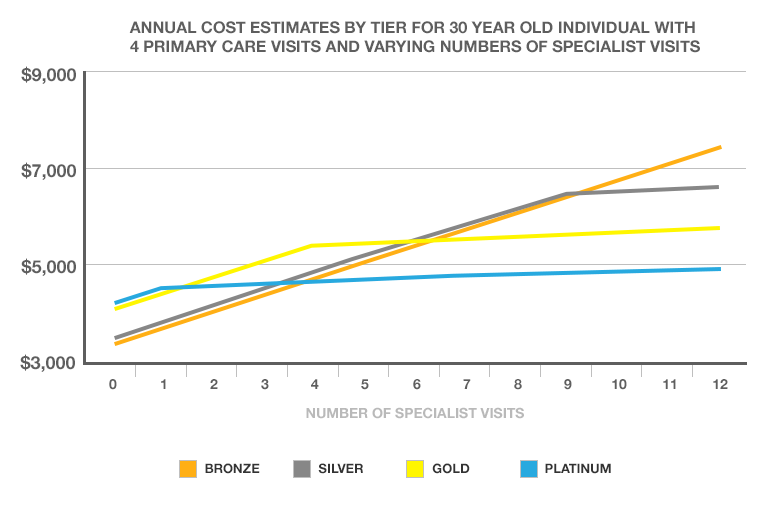 For 60 year-olds, bronze plans averaged the least expensive choice for up to 12 primary care visits per year.8 However if the same individual visited a specialist between nine and twelve times and their primary care physician four times, then the estimates showed that total annual costs would be lowest with the Platinum plan. 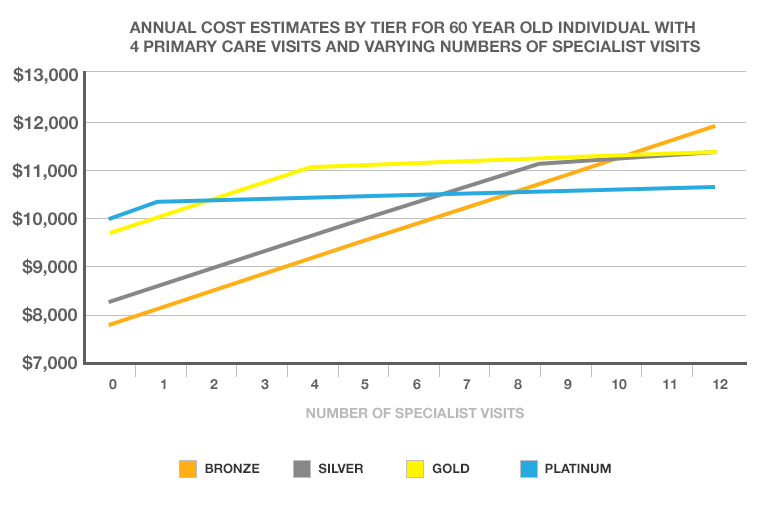 For consumers who rarely use a doctor, the entry-level Bronze plan is a compelling choice since it has the lowest average premium of the new Affordable Care Act plans.9 Assuming doctor visits are not subject to the deductible, the Bronze plan remains a financially attractive choice through seven primary care visits for a 30 year-old and twelve primary care visits for a 60 year old. However, when healthcare use increases or incorporates specialist visits, the average premiums and out-of-pocket costs for Bronze plans do not remain the least expensive option. For example, among 30 year-olds, four visits to a primary care physician combined with four visits to a specialist made Platinum plans the lowest cost option.

Out-of-pocket costs for 2014 Affordable Care Act health plans were based on the Qualified Health Plan (QHP) Landscape files for 34 federally-facilitated marketplaces, state-partnership marketplaces, and state-based marketplaces using the federal application system. Bronze, Silver, Gold, and Platinum health plan data was used, covering multiple rating regions within the 34 states covered by the landscape file. Plans that lacked cost-sharing data were not included within the study. Catastrophic plans, dental plans, and small business plans were not included within the scope of this study. The Qualified Health Plan (QHP) Landscape files were downloaded by HealthPocket from the Centers for Medicare & Medicaid Services data.healthcare.gov website on December 2, 2013 and December 10, 2013. Data analysis assumes the accuracy of the government data utilized.

All plans investigated in this study belong to the individual & family insurance market. Medicare, Medicaid, short-term health insurance, and group health insurance plans were not analyzed as part of this study. Industry standard rounding methods were utilized. No weighting by health plan enrollment was performed.

In the estimates there is no copayment or coinsurance fee before deductible for specialist visits. Moreover the deductible, copayment and coinsurance fees are included in the maximum out-of-pocket costs. The primary care visits are established patient visits lasting 15 minutes since the 13-16 minute range contains the median average time that primary care physicians spent with patients.10 In the scenarios used in this report, primary care visits are assumed not to be subject to the health plan deductible.

The specialist visits in the estimates are established patient visits lasting 25 minutes.

The cost estimates used the following retail costs from FairHealthConsumer.org for the 02144 zip code:

This analysis was written by Jesse Geneson, data researcher at HealthPocket, and Kev Coleman, Head of Research & Data at HealthPocket. Correspondence regarding this study can be directed to Mr. Coleman at kevin.coleman@healthpocket.com.

1 Metal plans may operate within a 2% tolerance. For example, a Bronze plan’s actual value may range from 58% to 62% of medical costs for a typical enrollee population.
2 The actuarial value of a metal plan represents the percentage of covered medical services delivered by in-network health care providers that are paid for by the health plan for a typical enrollee population. An enrollee’s particular usage of healthcare services may result in a higher or lower portion of the medical costs being paid by the health plan for that enrollee.
3 Kev Coleman & Jesse Geneson. “Deductibles, Out-Of-Pocket Costs, and the Affordable Care Act.” HealthPocket.com (December 12, 2013). /healthcare-research/infostat/2014-obamacare- deductible-out-of-pocket-costs/
4 Since marketplace plans cover charges for preventative care visits such as shots and screenings, the cost estimates consider only scenarios with non- preventative care visits.
5 For primary care and specialist visit cost-sharing each metal plan used the average of the more prevalent form of cost-sharing between copayment and coinsurance.
6 This scenario assumes the primary care visits are not subject to the deductible.
7 See Methodology section regarding cost estimates for primary care visits.
8 This scenario also assumes the primary care visits are not subject to the deductible.
9 This statement is based on average premiums. Depending on the region of the country and the level of plan competition, there could be instances where a higher tier metal plan from one insurance company could be less expensive than a Bronze plan from a different insurance company.
10 See the Medscape Physician Compensation Report: 2011 at http://www.medscape.com/features/slideshow/compensation/2011/