Gap Between Medicaid and Obamacare

Exchange Plans Unaffordable for People in Gap Between Medicaid and Obamacare 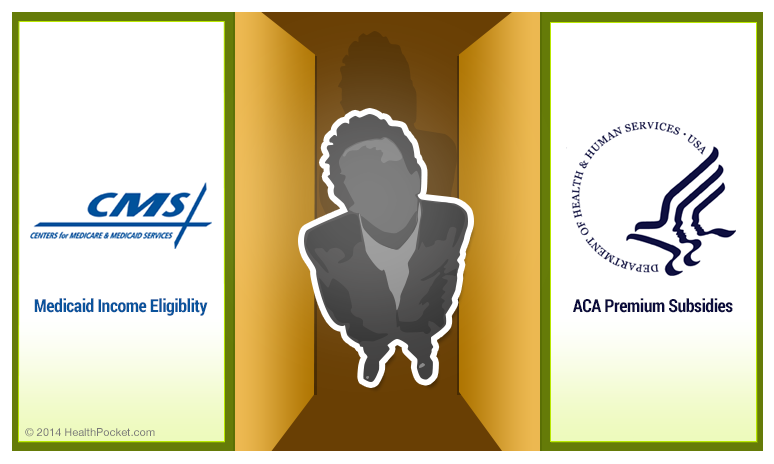 In addition to implementing health insurance premium subsidies, the Affordable Care Act also mandated a Medicaid eligibility expansion to cover every adult with income up to 138% FPL.1 An ensuing legal challenge to this mandate led the Supreme Court to rule that each state could choose whether or not to expand Medicaid income eligibility. Currently, 24 states2 have not expanded their Medicaid eligibility. In 23 of the states without Medicaid expansion, there are people with low incomes who fall in a gap between the highest income allowable for the state’s Medicaid program and the lowest income allowable for a premium subsidy.3 It is estimated that 4.8 million Americans fall within this “Medicaid/Obamacare Gap.”4

For each state with a Medicaid/Obamacare Gap, HealthPocket investigated what percentage of income would be needed to pay for an exchange plan for those within the gap. For each state, the lowest cost catastrophic plan, bronze plan, and silver plan were used for the expense calculations. While catastrophic plans are normally available only for enrollees under 30 years old, they are also available for those with a hardship exemption.5 One such exemption is being determined ineligible for Medicaid because your state did not expand Medicaid,6 so any adults with income below 100% FPL are eligible to buy a catastrophic plan regardless of their age if they live in a state with a Medicaid/Obamacare Gap.

On average across the 23 states with a Medicaid/Obamacare Gap, a 30-year-old non-smoker with income below 100% FPL would have to pay at least 14% of their income to purchase a catastrophic health plan. For older individuals in the gap, the expense increased since premiums increase as age increases. The premium expenses for 40 and 50-year-olds were 16% and 22% of income respectively. Americans in the Medicaid/Obamacare Gap in Wyoming had the highest premium expenses for 30, 40, and 50-year-olds (28%/31%/44%), while those in Kansas had the lowest percentages (9%/10%/14%). Every exchange catastrophic plan in 2014 had a medical deductible of at least $6,000 but it is worth noting that all catastrophic plans covered three primary care visits before the deductible was met.

30-year-old enrollees below 100% FPL purchasing bronze plans would have to pay at least 18% of their income for premium costs on average, while the corresponding percentages for 40 and 50-year-olds were 20% and 28%. Again Wyoming had the highest percentages for 30, 40, and 50-year-olds (31%/35%/48%), but Oklahoma had the lowest percentages (11%/13%/18%). In general bronze plans are supposed to pay approximately 60% of covered health care costs for a typical enrollee, but there are wide variations in plan designs. For example the medical deductible of exchange bronze plans in 2014 ranged from $2,000 to $6,350.7

The Affordable Care Act defined affordable coverage for an employee in employer-provided coverage to have premium costs at most 9.5% of the employee’s household income.9 By this definition of affordability, the only affordable exchange plan for any enrollees with incomes below 100% FPL that were ineligible for Medicaid was the cheapest catastrophic health plan in Kansas. This plan’s premium cost 9% FPL, but all other on-exchange catastrophic, bronze, and silver plans in states with a Medicaid/Obamacare Gap cost more than 9.5% FPL. This does not even include the cost of coinsurance, copayments or deductibles, which are at least $6,000 for every catastrophic plan.

One option for people ineligible for Medicaid with income below 100% FPL is to not purchase major medical coverage and still avoid paying a penalty. While there is generally a penalty for not having qualified health coverage, there is also an exemption for people that live in places where there is no exchange plan with premium costs at most 8% of their household income.10 Across the states in which non-disabled adults without dependent children are ineligible for Medicaid, the adults with income below federal poverty level are faced with the following choices: paying for an exchange plan, shopping for a plan off-exchange that has less expensive coverage than the cheapest exchange plan, moving to a state that expanded Medicaid, or forgoing qualified health coverage with no penalty. If their off-exchange options are not substantially cheaper than their exchange options and if they are in good health and do not anticipate high health care usage, then not buying a qualified health plan may be the cheapest choice for 2014, though it also carries the greatest financial and health risks.

The cheapest premium costs for catastrophic, bronze, and silver plans in each state with a Medicaid coverage gap were obtained from the landscape file of qualified health plans in the individual medical market at data.healthcare.gov, which was last updated June 10, 2014. Monthly premium costs were for non-smokers aged 30, 40, 50 that did not qualify for premium subsidies. Costs and income percentages in the tables did not include cost-sharing such as deductibles, coinsurance, or copayments.

Income percentages to pay for cheapest catastrophic, bronze, and silver plans were obtained by dividing the annual premium cost for each plan by the 2013 federal poverty level, which is the upper bound for the Medicaid coverage gap. All states in this study except for Alaska used $11,490 for the 2013 federal poverty level, while Alaska used $14,350.

This analysis was written by Jesse Geneson, data researcher at HealthPocket, and Kev Coleman, Head of Research & Data at HealthPocket. Correspondence regarding this study can be directed to Mr. Geneson at jesse.geneson@healthpocket.com.

1 Prior to the Supreme Court ruling on Medicaid expansion, the Affordable Care Act expanded Medicaid to cover all non-pregnant adults between the ages of 19 and 65 with household incomes at most 133% FPL with a five percentage point of disregard. Thus the effective eligibility threshold is 138% FPL. Medicaid Eligibility, Enrollment Simplification, and Coordination under the Affordable Care Act: A Summary of CMS’s March 23, 2012 Final Rule. Kaiser Family Foundation. December 2012. http://kaiserfamilyfoundation.files.wordpress.com/2013/04/8391.pdf
2 Wisconsin’s Medicaid program provides coverage to non-disabled adults without dependent children up to 100% FPL, but the other 23 states not expanding Medicaid do not cover non-disabled adults without dependent children.
3 The lowest income eligible for a health insurance premium subsidy under the Affordable Care Act is 100% of the Federal Poverty Level (based on your state and the number of people in your family size). The 2014 health insurance subsidies use the federal poverty guidelines for 2013 since the 2014 open enrollment period started in October 2013. 2013 Poverty Guidelines. U.S. Department of Health & Human Services. https://aspe.hhs.gov/2013-poverty-guidelines. The government web site Healthcare.gov explains “But if your income falls below the amounts shown on the chart, your state is not expanding Medicaid, and you don't qualify for Medicaid under your state's rules, you can’t get premium tax credits that reduce what you pay for a private insurance plan.” https://www.healthcare.gov/will-i-qualify-to-save-on-monthly-premiums/
4 The Coverage Gap: Uninsured Poor Adults in States that Do Not Expand Medicaid. Kaiser Family Foundation. March 2014. http://kff.org/health-reform/issue-brief/the-coverage-gap-uninsured-poor-adults-in-states-that-do-not-expand-medicaid/
5 Glossary: Catastrophic Health Plan. https://www.healthcare.gov/glossary/catastrophic-health-plan/
6 How do I qualify for an exemption from the fee for not having health coverage? https://www.healthcare.gov/exemptions/
7 Jesse Geneson, Kev Coleman. Consumers Risk Higher Healthcare Costs When Using Shortcuts in Health Plan Shopping. January 22, 2014. /healthcare-research/infostat/higher-healthcare-costs-risked-using-shortcuts
8 Ibid.
9 Questions and Answers on Employer Shared Responsibility Provisions Under the Affordable Care Act. IRS. https://www.irs.gov/affordable-care-act/employers/questions-and-answers-on-employer-shared-responsibility-provisions-under-the-affordable-care-act
10 How do I qualify for an exemption from the fee for not having health coverage? https://www.healthcare.gov/exemptions/