Infostat: With Expansion Looming, Less Than Half of Physicians Accept Medicaid - Healthpocket
InfoStat | 05-01-13

With Expansion Looming, Less Than Half of Physicians Accept Medicaid

Physician Assistants & Nurse Practitioners Not Poised to Fill the Gap

Not all doctors accept Medicaid and the quantity of doctors rejecting Medicaid insurance presents a potential challenge to the Affordable Care Act’s expansion of the program. HealthPocket’s examination of over one million healthcare providers, from physicians and therapists to counselors and other specialists, found that only 43% were documented as accepting Medicaid.1

It has been suggested that some additional healthcare capacity may be found for new Medicaid enrollees through greater use of physician assistants and nurse practitioners. Physician assistants and nurse practitioners are medical professionals with advanced training who can prescribe treatments and deliver other services beyond that allowed for registered nurses. 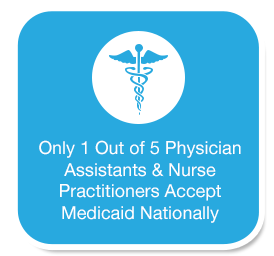 This idea has its merits, particularly with respect to the compatibility of Medicaid reimbursement rates with the lower costs of these healthcare providers as compared to doctors. However, when examining Medicaid acceptance for physician assistants and nurse practitioners HealthPocket found that nationally only 20% currently accept Medicaid, less than half the rate seen for the other categories of healthcare providers examined in this study.

California & The Question of Consistency

On the surface, the disparity in Medicaid acceptance for major cities within the same state was a counter intuitive finding. California is below the national average with respect to Medicaid reimbursement and pays its Medicaid doctors reimbursements that average 51% of Medicare’s reimbursement rate for the same services.8 Despite operating in the same Medicaid environment, San Francisco healthcare providers accepted Medicaid at a rate of 36% while San Jose accepted Medicaid at a rate of 51%. One of the issues that may be driving this Medicaid acceptance gap between the cities is their respective pools of Medicaid and non-Medicaid patients.

HealthPocket’s analysis of Medicaid acceptance in the richest and poorest cities illuminates one of the challenges facing the expansion of state Medicaid programs. Nationally less than half of physicians, therapists, and other healthcare providers examined accept Medicaid. The same is true on average for the richest and poorest cities. To further complicate matters, a portion of healthcare providers who currently treat Medicaid patients may not accept new Medicaid patients. A 2011 study found that 31% of physicians analyzed would not accept new patients with Medicaid insurance coverage.9 This shortage of doctors accepting Medicaid will become more pronounced as Medicaid eligibility expands and enrollment increases. Additionally, the Medicaid doctor shortage will likely exacerbate existing delays for Medicaid patients with respect to obtaining doctor appointments.10

The need for more healthcare providers accepting Medicaid is obvious but the path to address this need is unclear. The federal government is implementing a temporary two-year increase for Medicaid reimbursement rates. However, healthcare providers may stay on the sideline rather than accept new Medicaid patients given the prospect that they may need to discontinue care for these patients once Medicaid rates are lowered due to an expiration of the increased reimbursement rate. Some states, on the other hand, are exploring the Medicaid adoption of existing health plans with established physician networks.

Given the importance of Medicaid acceptance, HealthPocket enables doctors to update their Medicaid acceptance status as well as other practice information by using the doctor search tool on HealthPocket.com and then clicking the “Edit Info” link on their record. This same tool allows consumers to find physicians within a given region that accept Medicaid, Medicare, or a specific insurer.

All analysis assumes the accuracy of the underlying government data. While every effort was made towards to enhance data accuracy, HealthPocket makes no representation that every healthcare provider in the selected geographies were included in this study.

Percentages are rounded according to standard industry practices. The list of the five richest cities and five poorest cities is based on a 2012 study on average household income within the 25 most populous U.S. cities.11

1 Statistics regarding healthcare provider acceptance of Medicaid patients is based on data from the NPI Registry.
2 A temporary two-year increase in reimbursement to doctors for services to Medicaid patients is being implemented to encourage more doctors to accept Medicaid. While the implementation of this program is behind schedule, it is planned to be retroactive to January 1, 2013. Japsen, Bruce. "Obamacare's 73% Medicaid Pay Raise For Doctors Is Delayed" Forbes (March 15, 2013). http://www.forbes.com/sites/brucejapsen/2013/03/15/obamacares-73-medicaid-pay-raise-for-doctors-is-delayed/
3 Stephen Zuckerman and Dana Goin, "How Much Will Medicaid Physician Fees for Primary Care Rise in 2013? Evidence from a 2012 Survey of Medicaid Physician Fees," Urban Institute and Kaiser Commission on Medicaid and the Uninsured (December 2012). available at http://www.kff.org/medicaid/upload/8398.pdf
4 Paradise, Julia et al. “Improving Access to Adult Primary Care in Medicaid: Exploring the Potential Role of Nurse Practitioners and Physician Assistants” Kaiser Family Foundation (March 2011) p.6.
5 Ibid.
6 Classification of cities as richest and poorest based on average household income assembled by the Census Bureau. Mantell, Ruth. "Richest and poorest US cities by income" MarketWatch. http://money.msn.com/personal-finance/richest-and-poorest-us-cities-by-income.
7 State status regarding Medicaid expansion reviewed as of April 23, 2013. http://www.advisory.com/Daily-Briefing/2012/11/09/MedicaidMap
8 Zuckerman, p.14.
9 Decker, Sandra. "In 2011 Nearly One-Third Of Physicians Said They Would Not Accept New Medicaid Patients, But Rising Fees May Help" HealthAffairs (August 2012) vol. 31 no. 8.
10 Norton, Amy. "Getting a doctor's appointment tougher on Medicaid" Reuters Health (March 27, 2012).
11 Mantell, Ruth. "Richest and poorest US cities by income."