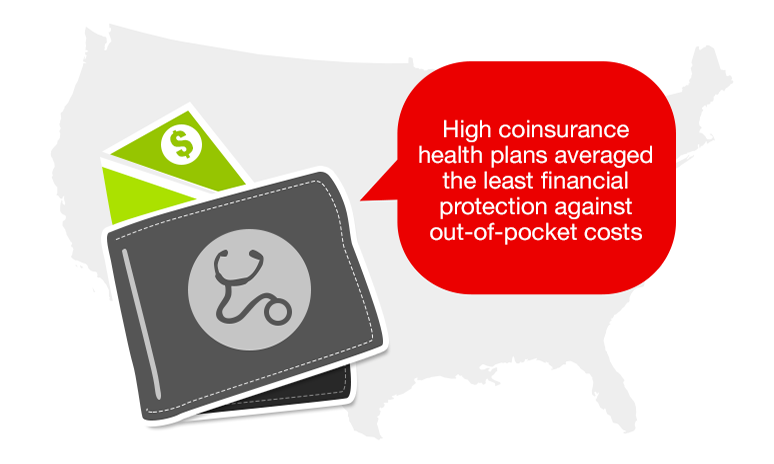 “Coinsurance” is a familiar concept for consumers who have purchased health insurance in the individual and family market. As a percentage of medical costs paid out-of-pocket by consumers, coinsurance is often used by a health plan as a method of cost-sharing for more expensive services such as hospitalization, inpatient and outpatient surgeries, child birth, and emergency care. If a plan, for example, had a 15% coinsurance for a particular medical service and that service cost $10,000 then a consumer enrolled in the plan would pay $1,500.

Upon closer inspection of the data, HealthPocket also found a surprising relationship between the coinsurance rate required of plan members and the annual limit health plans placed on out-of-pocket costs.

Plans with coinsurance rates above 40% and a high out of pocket limit were offered by a variety of insurance companies across the U.S. including certain well-known brands. The Health Net’s PPO Advantage 6500 in California is an example of such a plan.

Given the combination of a high coinsurance rate and a high out-of-pocket limit, consumers considering such a health plan should be financially prepared for high out-of-pocket costs in the event they need extensive medical services during the year. The Affordable Care Act will prevent insurance companies from offering new health plans similar to this Health Net example beginning in 2014.

Changes Coming for Coinsurance and Deductibles Under The Affordable Care Act

The study of coinsurance and deductibles for current plans raises the question of how they will compare to the coinsurance and deductibles of the new health plans created by the Affordable Care Act. The Kaiser Family Foundation commissioned Aon Hewitt to model some potential out-of-pocket cost designs for the upcoming Bronze Plan and Silver Plan.5 The below table compares the average coinsurance rate for current individual and family health insurance to the Aon Hewitt examples of upcoming Bronze and Silver designs.

When examining the Bronze and Silver plan designs with the same coinsurance rate as the current national average, we find that the Bronze Plan has both a higher deductible and a higher out-of-pocket limit than the averages for existing plans. The Silver Plan, on the other hand, has a significantly lower deductible for the 20% coinsurance plan design, nearly $1,500 less than the average deductible for existing plans. Like the Bronze Plan, though, the Silver Plan’s annual out-of-pocket limit was higher than the current average amount.

It is important to note in this discussion of coinsurance rates, deductibles, and out-of-pocket limits that the new Bronze and Silver plans will cover more medical services than the existing plans to which they are being compared. Accordingly, some individuals may find that they will pay a coinsurance charge or copayment where previously they were responsible for the total costs of a previously uncovered medical service such as pediatric dental care. As HealthPocket’s previous research revealed, the average individual and family health insurance plan has only 76% of the benefits that will be included in the new Affordable Care Act plans.8

There is nothing inherently wrong a health plan that has an above average coinsurance as long as the consumer evaluates their coinsurance obligation with the other financial aspects of the plan. In fact, exposing consumers to a greater degree of medical expenses through coinsurance has the potential to drive down the costs for American healthcare if it encourages consumers to shop prices comparatively among medical providers and, and this is a big “and,” the market develops widely available mechanisms to access provider prices easily. Without price transparency in the healthcare market, consumerism cannot effectively drive down prices through competition. Currently, we are far from this situation. A 2013 study published by the Journal of the American Medical Association9 found that 40% of hospitals contacted in the study could not provide a complete cost estimate for a hip replacement. The lack of consumer awareness in pricing differences resulted in an enormous difference in potential costs. The least expensive provider charged $11,100 while the most expensive charged more than $125,000.

Of equal importance as transparent pricing information is the matter of medical service quality. Without data indicating the quality of clinical outcomes for various services, consumers could be pushed forward in ‘a race to the bottom’ where medical costs are reduced at the expense of quality of care.

Results of the study were based on an analysis of 9,711 health insurance plans listing coinsurance percentages for beneficiary cost sharing. Flat fee copayments were not analyzed. Health plans were limited to the individuals and family insurance market for consumers under the age of 65. Health plans from the Medicare, Medicaid, and employer-based health insurance markets were not included within this study. The data used in this study was obtained from insurance records made public by the Department of Health & Human Services. The data was collected on March 13, 2013.

HealthPocket.com is a free website that compares and ranks all health plans available to an individual, family or small business so everyone can make their best health plan decision and save on their out-of-pocket costs. The Company uses only objective data from government, non-profit, and private sources that carry no conditions that might restrict the site from serving as an unbiased resource. The founders of HealthPocket.com spent decades pioneering online access to health insurance information and knew they could offer something different that can positively change how people buy and use healthcare in the U.S. Learn more at www.HealthPocket.com.

1 Annual out-of-pocket limits based on those plans that supplied that information within their health plan records for Health & Human Services. Caps pertain to those services covered by the health plan delivered by in-network providers.
2 Information obtained from Health Net's website.https://www.healthnet.com/portal/shopping/ifp/planList.action?productType=200
3 Ibid.
4 Information on the out-of-pocket maximum for the plan is provided at https://www.healthnet.com/static/broker/unprotected/pdfs/ca/ifp/iQuote/264_NBL_MD_C0_PPO_ADV_6500_2013_prospect_SBC.pdf
5 Claxton, G. and Levitt, L. "Patient Cost-Sharing Under the Affordable Care Act." Kaiser Family Foundation. (Apri; 2012).
6 The annual out-of-pocket limit referenced by Aon Hewitt in the table is for 2014. The 2013 rate would be $6250.
7 /healthcare-resources/1-3-health-plans-out-of-pocket-costs-fail-aca-standards
8 /healthcare-resources/few-existing-health-plans-meet-new-aca-essential-health-benefit-standards
9 Steinmetz, A. & Emanuel. E. "What Does a Hip Replacement Cost? The Transparency Imperative in 2013." JAMA Internal Medicine. Published online February 11, 2013. http://archinte.jamanetwork.com/article.aspx?articleid=1569849