Demonstrates the Value of Government Completeness and Objectivity 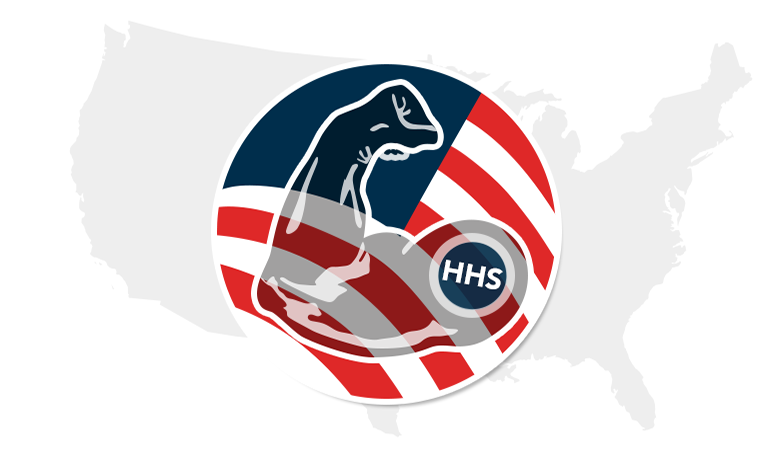 Survey research shows that people rely on the Internet for health information generally.1 The Affordable Care Act ("ACA" and often referred to as "Obamacare") recognizes increasing consumer reliance on the Internet in that it calls for establishment of government-operated online health insurance marketplaces for every state, effective October 1, 2013. By 2017, the CBO estimates that 23 million people will obtain their insurance from government exchanges and 12 million from private markets, including online private exchanges, insurance companies and the agents of insurance companies.2

The term "private exchanges" has emerged in recent years in counterpoint to government exchanges (often simply called "the Exchanges") and may be defined in the most general terms as private online marketplaces of health insurance and related products.3 The term embraces a broad range of companies including web brokers and lead generation sites for "bricks and mortar" brokers.4

Given their increasing role, HealthPocket decided to examine the offerings of the two largest private health insurance exchanges with respect to their (a) Medicare Advantage (MA) and Medicare Part D (Prescription Drug Plans or PDP) plans and (b) individual and family (IFP) plans.5 6 Demand for both MA and PDP is expected to increase as baby boomers age into Medicare eligibility. Demand for IFP products is expected to increase as the ACA’s individual mandate and subsidies near full implementation.7

This study is divided into two parts. First, it examines the number of Medicare Advantage and PDP carriers and plans offered by the private exchanges for coverage beginning June 1, 2013 in eight of the largest U.S. metropolitan areas with those offered through Medicare’s Plan Finder at medicare.gov. It then conducts a similar examination of their IFP offerings to a 35 year-old woman shopping for health insurance as compared with the carriers and plans available through healthcare.gov.8

In this part of the study HealthPocket compared carrier and plan offerings by the selected private exchanges with those in the benchmark list maintained by HHS’s Centers for Medicare & Medicaid Services (CMS) Plan Finder.9

For Medicare Advantage private exchanges displayed an average of 35% (31 out of 88) of the available carriers on the CMS site.10 The percentage of MA plans shown to the consumer by the private exchanges averaged 41% (92.5 out of 228.)11 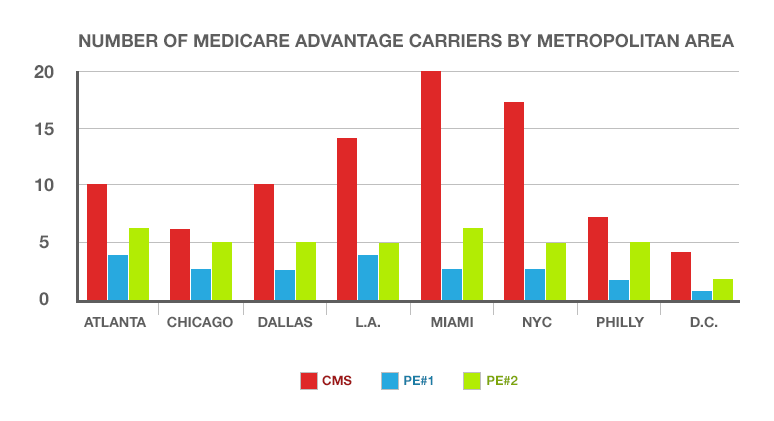 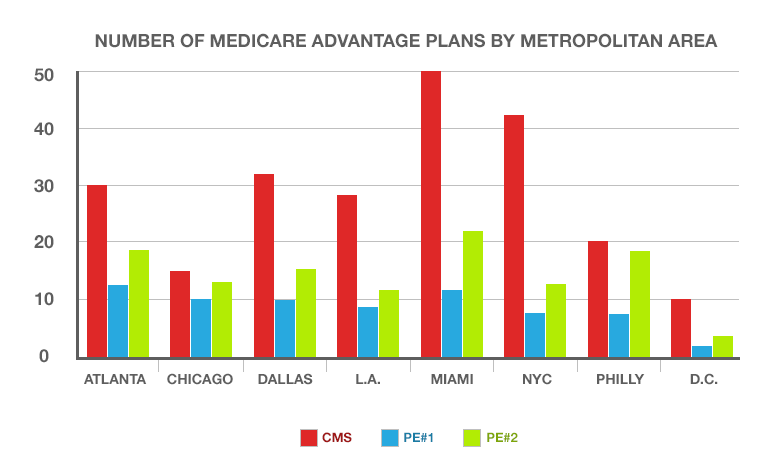 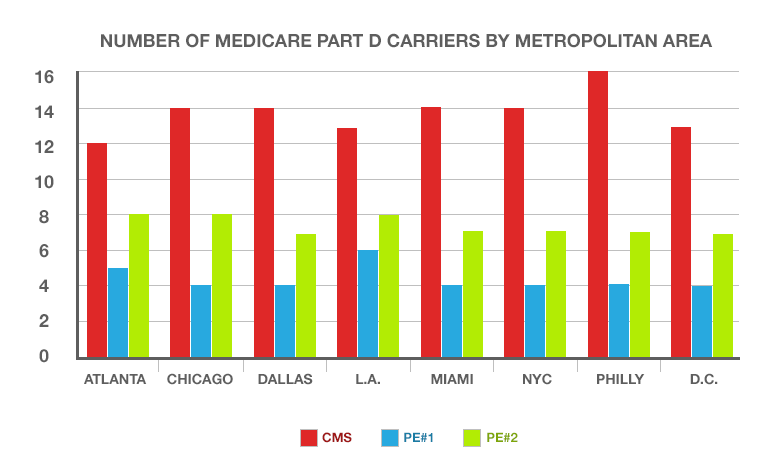 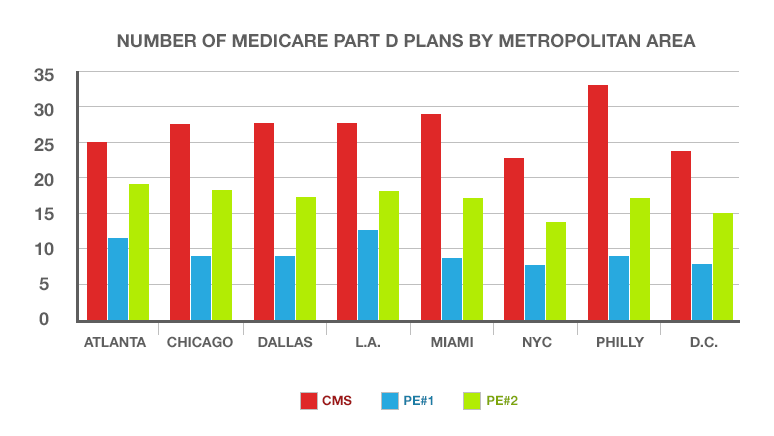 The list of carriers and plans displayed to our IFP test consumer in the same urban markets through the private exchanges were compared to the list of carriers and actively marketed plans maintained by the Department of Health and Human Services (HHS) and available on healthcare.gov.15 Overall, an average of 80% of the carriers16 (34.5 out of 43) and 34% of the plans (476 out of 1406) available according to HHS were offered to the customer by these private exchanges.17 Individually, private exchanges presented 93% and 67% of the HHS carriers and 38% and 30% of the HHS plans. However, HHS carrier offerings lagged behind at least one of the private exchanges in three major metropolitan areas (Chicago, Dallas and New York) with the number of HHS plan offerings lagging in one city (New York.)18 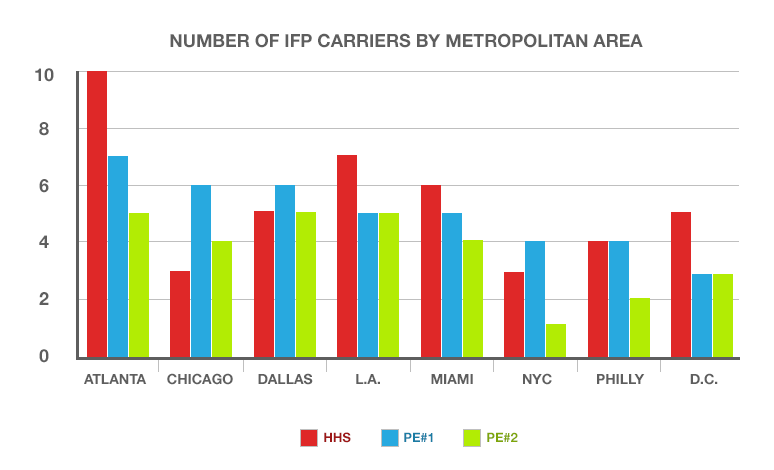 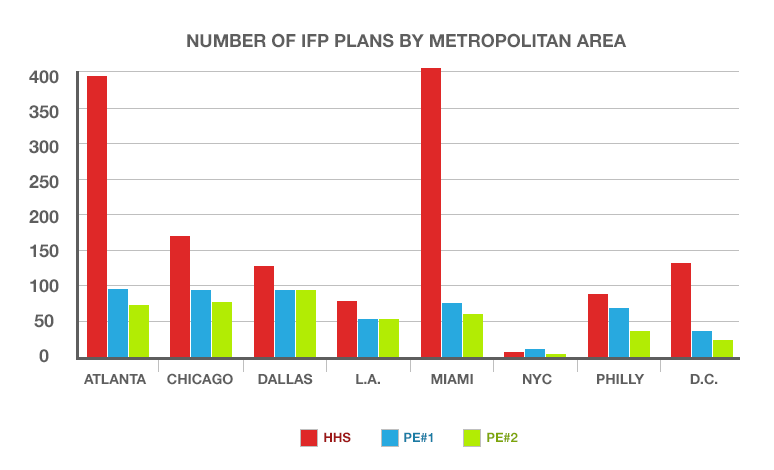 The individual and family plans offered were examined in relation to the twenty "top private health insurance plan" list established by the National Committee for Quality Assurance (NCQA), a major and highly-recognized quality assurance organization in the health care industry.19 This list represents the highest 4.2% of all of the NCQA ranked plans. The percentage of high-end plans available in the test areas was found to be at only 1.6%, with 23 of 1406 plans. The leading IFP private exchange matched HHS offerings with all 23 plans; the second private exchange was found to have 13 or 57% of those plans.

People shopping in the individual health and Medicare markets obtain their coverage in a number of ways. They can buy through government websites, agents and brokers or directly through the carriers. Many go online to do research in advance and others skip that step and go directly to someone they trust or is recommended to them by a trusted source. One way or another it is helpful to the consumer that their research provides them selections from a complete array of market choices.

The Medicare market has gone through a number of changes in the past decade, the most substantial of which was the start of the Medicare Prescription Drug Benefit in 2006. As the program changed and more choices were available to enrollees, the government developed sophisticated systems for making data available to the public about all plan choices. As the individual market undergoes massive change with the introduction of exchanges, guaranteed issue coverage, subsidies and a buying open enrollment season in the fourth quarter of each year, the same level of sophistication will need to be brought to the individual market. Gaps that currently exist in government data sets will need to be filled by carriers and HHS in order for consumers to be fully aware of their options.

New rules for web based insurance brokers will also come into place for those brokers wishing to sell plans on the federal health plan exchange. Those private exchange brokers electing to become web based entities will need to display all plans, not just those with which they are appointed to sell.20

HealthPocket plans on updating this report as the major ACA changes come into place toward the end of 2013.

This report was authored by Steve Zaleznick, Executive Director for Consumer Strategy and Development, and Peter Barth, Head of Consumer Advocacy at HealthPocket.com. Correspondence can be directed to Mr. Zaleznick at steven.zaleznick@healthpocket.com or Mr. Barth at peter.barth@healthpocket.com. Feedback and questions are welcome but, given the volume of email, personal responses may not be feasible.

1 See CDC research: http://www.cdc.gov/nchs/data/databriefs/db66.htm.
2 See March 30, 2011 Congressional Budget Office (CBO) report at http://cbo.gov/publication/22077.
3 See http://www.booz.com/media/file/BoozCo-Emergence-Private-Health-Insurance-Exchanges.pdf. This paper further defines the use of the term private exchange in relation to employers; in this paper we utilize the most general definition as noted since this is in increasingly widespread use in the industry and public today.
4 Extend Health, Inc., A Towers Watson Company, described as the "largest private Medicare exchange," is referred to as PE#2 in the graphs. See https://www.extendhealth.com/about.
5 eHealth, Inc. described as the "largest private health insurance exchange for individuals and families" and is referred to as PE#1 in the graphs.
6 See Note 3 above.
7 Selected from the ten largest metropolitan areas, with elimination of duplicate states, as based on U.S Census Bureau statistics at http://www.census.gov/popest/data/metro/totals/2012. The data was taken from the government site on May 20, 2013. The cities selected are Atlanta, Chicago, Dallas, Los Angeles, Miami, New York, Philadelphia, and Washington, D.C.
8 Available at http://www.medicare.gov/. Only about 3.3% of MA plans receive a Five Star rating.
9 The private exchanges studied were 44.3% and 26.1% of the CMS Medicare Advantage carriers.
10 Private exchanges displayed plans were 50.9% and 30.3% of the CMS Medicare Advantage number of plans.
11 Medicare PDP carriers displayed on the private exchanges studied were 53.6% and 31.8% of the CMS PDP carriers.
12 Medicare PDP plans displayed on the private exchanges were 62.8% to 35.4% of the CMS PDP plans.
13 See a description of the "Five-Star Quality Rating System" at http://www.medicare.gov/Pubs/pdf/11226.pdf, (Copy available thru Mississipi Medicaid archive).
14 The DHHS provides a list of approved and actively marketed health insurance plans at http://www.healthcare.gov. As a minimum, this list includes all plans with at least 1% of a carrier’s enrollment by zip code region.
15 HHS data in four cities counted affiliates of carriers as separate carriers, and this study combined them to count each as a single carrier.
16 Only plans displayed directly online to a consumer were considered for this study and HealthPocket did not contact the private exchanges or HHS and CMS by phone or other means.
17 See http://finder.healthcare.gov/services/faq. This also includes a discussion of some of the factors that result in variability within HHS data availability.
18 See private health insurance plans determined by the NCQA at http://www.ncqa.org/ReportCards/HealthPlans/HealthInsurancePlanRankings/PrivateHealthPlanRankings2 0122013.aspx.