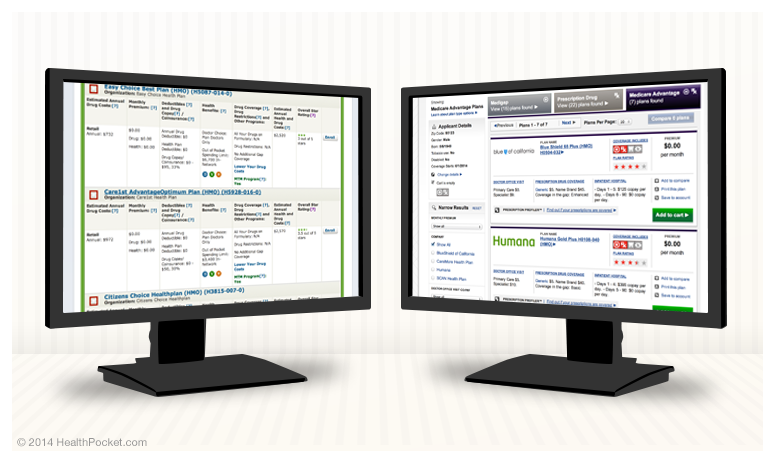 In June 2013, HealthPocket compared the inventory of health plans on eHealth and Extend Health with the plan inventories of the government plan finders at Healthcare.gov and Medicare.gov.4 The study found that the number of Obamacare and Medicare plans with effective date June 1, 2013 that were displayed on private exchanges was significantly less than on government plan finders. Given the numerous changes in the health insurance market in 2014, HealthPocket performed a new study comparing government exchanges with the private broker health insurance exchanges. This investigation focused on the Obamacare health plan inventories across eleven geographically diverse major cities across the United States on eHealth (ehealthinsurance.com) as compared to each city’s government-run health insurance exchange.5 HealthPocket also compared the Medicare Advantage plan inventories across the same cities on Towers Watson’s OneExchange (medicare.OneExchange.com) and the Medicare Plan Finder on Medicare.gov (the government-run Medicare insurance exchange).6

The government exchanges had more Obamacare plans than eHealth in seven out of eleven cities; there were no ties in any city. On average eHealth had 29% fewer Obamacare plans than the government exchanges. The greatest disparity was in Miami where eHealth displayed 40 plans and Healthcare.gov displayed 137 plans. The exchange comparison study from June 2013 found on average that 38% of the plans displayed on Healthcare.gov were offered on eHealth.7 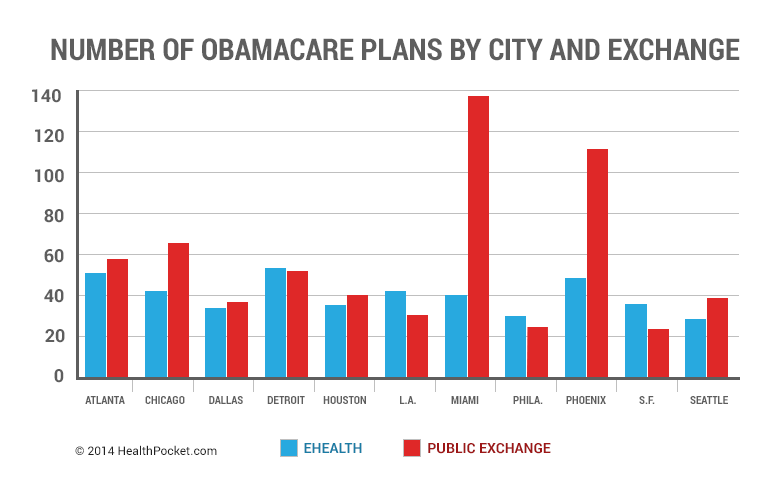 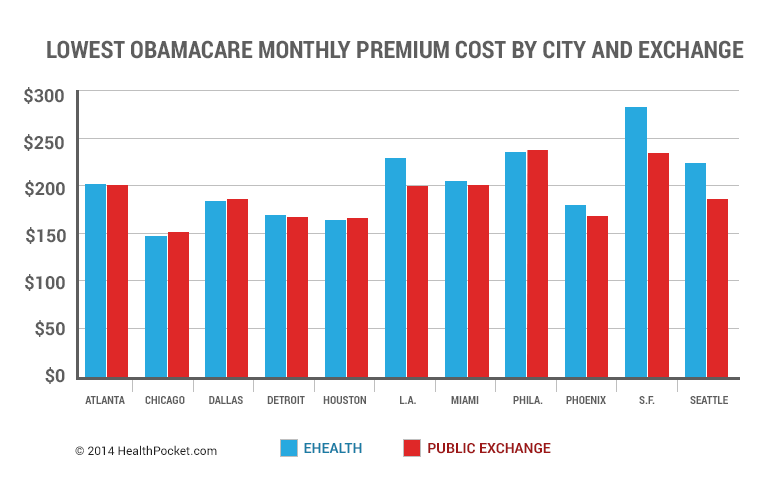 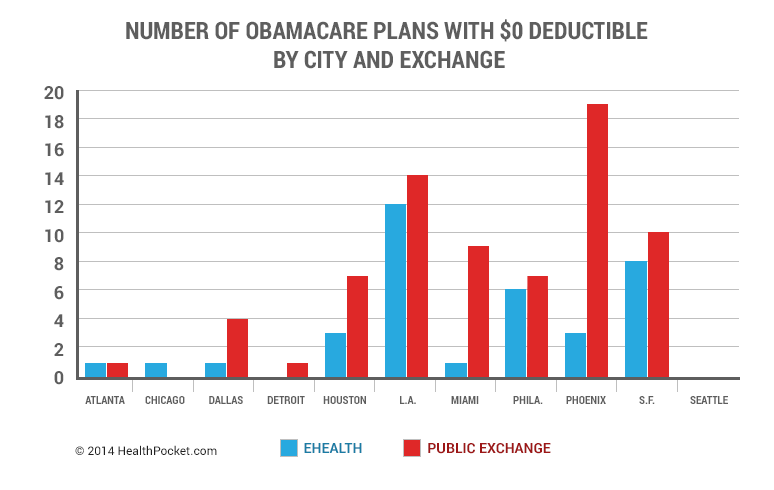 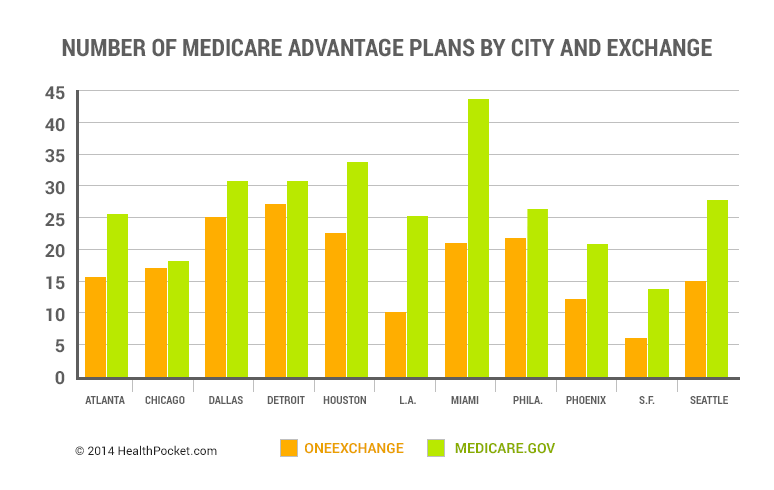 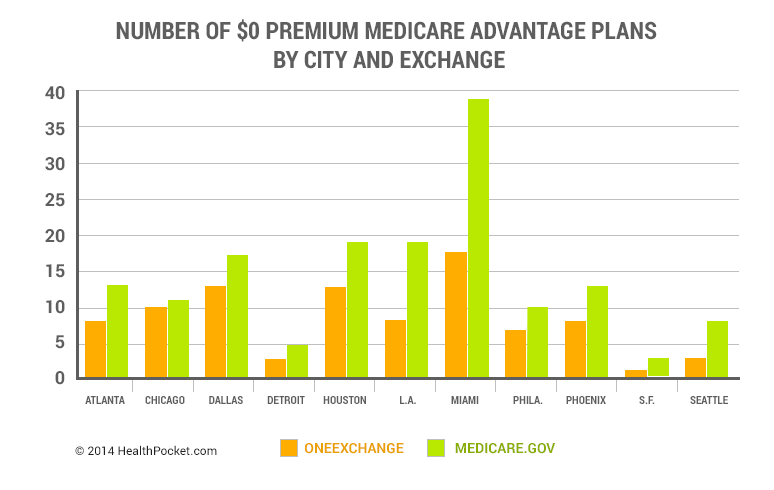 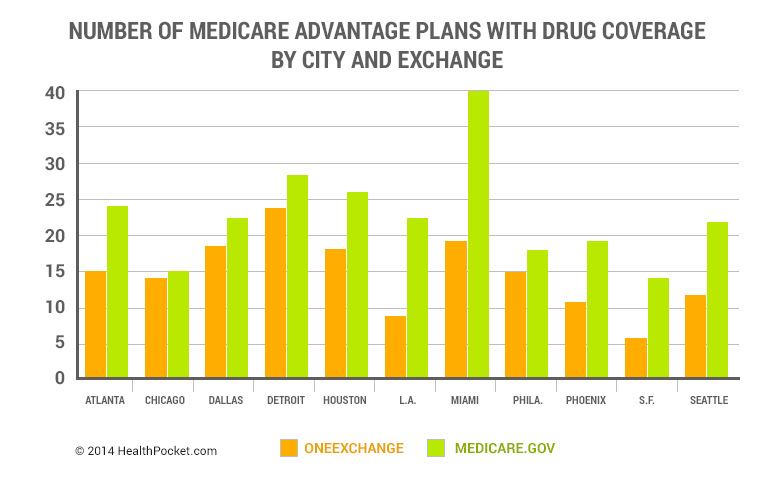 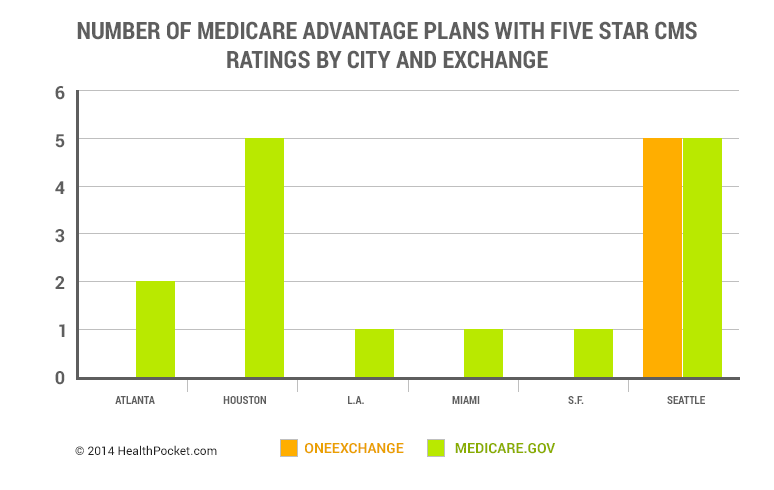 Although the government exchanges averaged a more comprehensive list of plans than the private broker exchanges, the results of this study show that the inventory of private exchanges has become more competitive than was the case for 2013. In particular OneExchange displayed on average 65% as many Medicare Advantage plans as the government plan finder, up from 30% in June 2013. The exchange on eHealth improved to have 71% as many Obamacare plans as the government exchanges. The previous study from June 2013 found that eHealth had only offered 38% of the plans displayed on the plan finder at Healthcare.gov.14

Quotes for each city and exchange for plans with an effective date of June 1, 2014 were obtained on May 1, 2014. Quotes for Obamacare plans were found for a 40-year-old non-smoker with an annual income of $50,000.

This analysis was written by Jesse Geneson, Data Researcher at HealthPocket, and Kev Coleman, Head of Research and Data at HealthPocket, with data analysis by Katherine Bian. Correspondence regarding this study can be directed to Mr. Geneson at jesse.geneson@healthpocket.com.