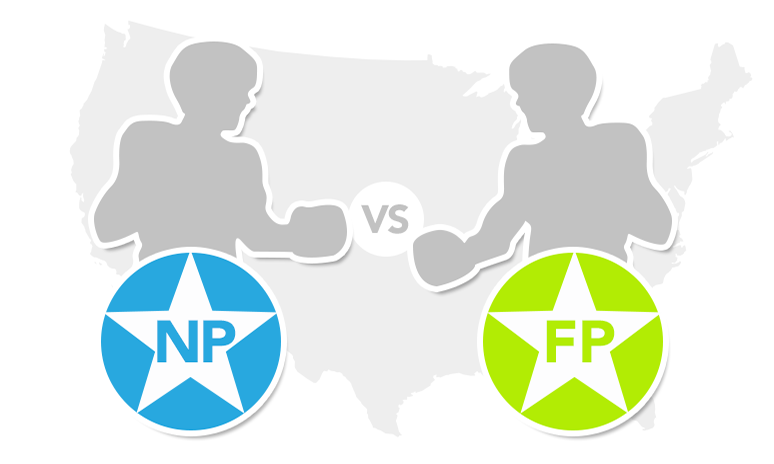 Is profit an impediment to affordable healthcare? Would the elimination of commercial insurers translate into lower insurance premiums for consumers or would the absence of a profit incentive lead to increased inefficiencies and costs? While these questions have been around for decades, they are receiving renewed attention. With less than 6 months before consumers can compare their existing health insurance to the new Affordable Care Act (ACA) plans, many industry analysts are predicting premium increases for these new plans. If the predictions prove true then there will be renewed debate over health insurance cost drivers including insurance company profits.

Using Health & Human Services health insurance data, HealthPocket compared health insurance premiums for nonprofit and for-profit health plans in 6 major cities1 across the United States: Pittsburgh, Miami, Kansas City, Dallas, Los Angeles, and Portland (Oregon). We localized our analysis to a collection of cities since health premiums are partly determined by the general health and medical claims trend for a region. Nonprofit and for-profit health plan premiums were compared in each city for individual female and male nonsmokers ages 25 and 50. In order to make the premium comparisons as fair as possible, all plans in the analysis were required to meet a minimum standard of health benefits2 and the premium comparisons were only performed within deductible ranges of $2,000 since deductible amounts often have an effect on premium.3 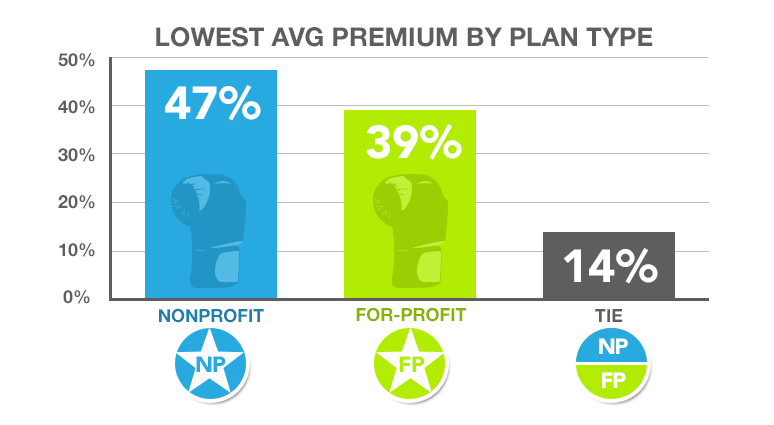 After performing the premium comparisons, HealthPocket returned to the data to determine if the difference between nonprofit and for-profit plans was due to a higher incidence of HMO plans among the nonprofits. HMOs (Health Maintenance Organizations) are health plans where the enrollee must obtain a referral from an in-network primary care physician to see an in-network specialist and the use out-of-network doctors may result in no reimbursement from the HMO plan. HMOs are commonly assumed to have lower premiums due to its greater enrollee restrictions as compared to a Preferred Provider Network (PPO) model.

Given the results of the premium comparisons, budget-conscious consumers should always include nonprofits within their health plan shopping. However, consumers can’t assume nonprofits will always provide the lowest cost given the 53% of comparisons where that was not the case. 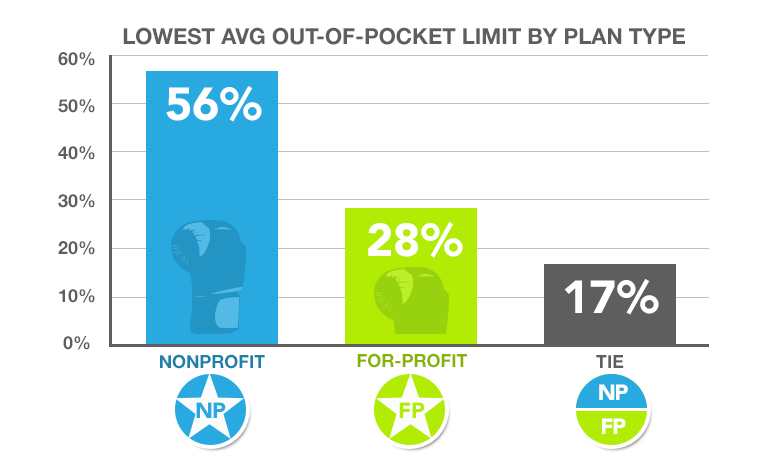 Most health plans establish a maximum amount an enrollee can pay out-of-pocket during the year.5 These annual limits apply only to healthcare services covered by the health plan, with no limits applied to uncovered services. Out-of-pocket limits protect health plan enrollees from catastrophic medical bills in the event of a major medical event. HealthPocket compared the average limits on out-of-pocket costs between nonprofit and for-profit health plans to determine if the two categories of health plans provided similar enrollee protections.

The results of HealthPocket’s analysis indicated that, for the cities examined, profit was not an impediment to affordable healthcare but nonprofit health plans on average were more likely to have lower premiums and better protections against out-of-pocket costs. Given that the cities examined were large metropolitan regions with representation from both coasts as well as the central U.S., HealthPocket believes the results have national relevance.

The reason why the nonprofit plans in our study had a greater likelihood for both lower premiums and superior out-of-pocket protections than for-profit plans is unclear since there are several major differences between the two types of health plans. The taxation differences between nonprofit health plans and forprofit plans can be complicated since the nonprofits’ tax exemption does not necessarily apply to all their activities and can vary by state. Generally, the nonprofits retain earnings to improve services instead of distributing the earnings to investors as a for-profit plan may choose to do. However, nonprofits can also experience drawbacks with respect to raising capital.7 For-profit health plans may see their corporate mission differently than nonprofit plans and judge corporate success by different criteria including profit margin.

Beginning in 2014, comparisons between nonprofit and for-profit health plans will become more accurate as coverage standardizes to a large degree under the new Essential Health Benefit requirements. At that point, premium differences between nonprofit and for-profit health plans will become more transparent and the quality of doctor and hospital networks may gain urgency as a justification for premium differences. Lower premiums will be less attractive if they are associated with lower quality. Likewise, higher quality at a lower price can enable smaller insurance companies to take market share away from insurance companies with well-known and trusted brands. In the interests of pursuing this subject within the current insurance market, HealthPocket will be releasing a future study that examines quality among the nonprofit and for-profit plans that had been examined within this study.

Given the potential premium effect of a health plan's profit status, HealthPocket's Medicare and Individual and Family health insurance premium comparison pages use icons with the letters "NP" to indicate that a specific health plan is a nonprofit. Consumer can use this information as part of their shopping process.

Results of the study were based on an analysis of 2,372 premium quotes collected on May 6, 2013 from 593 health plans in the following cities:

Premium quotes were generated for each health plan based on the following profiles:

Premiums were categorized according to the profit status (i.e. nonprofit, forprofit) of the health plan and the deductible amount of the plan. The deductible categories used in the study were as follows:

Categorized premiums were averaged separately for the 25-year old profiles and the 50 year-old profiles within their respective groupings for profit status and deductible category. Premium averages were not weighted for enrollment.

All analysis assumes the accuracy of the underlying government data. While every effort was made towards a representative collection of plans, HealthPocket makes no representation that every plan within the individual insurance market or in an individual state was included in this study. Percentages are rounded according to standard industry practices.

This study was completed by Kev Coleman, Head of Research & Data at HealthPocket.com. Correspondence regarding this study can be directed to Mr. Coleman at kevin.coleman@healthpocket.com. Feedback and questions are welcome but, given the volume of email, personal responses may not be feasible.

1 Part of the selection of the cities was influenced by the desire to have two cities from the east coast, two cities from the west coast, and two cities from the central United States.
2 For a health plan to be included in the study, it was required to have some form of coverage within the following categories: primary care visits, other practitioner visits, specialist visit, outpatient facility fees, outpatient physician fees, home healthcare, emergency room visits, emergency transportation, urgent care, hospital facility fees, hospital physician fees, generic prescription drug coverage, preferred brand-name prescription drug coverage, nonpreferred brand-name prescription drug coverage, inpatient rehabilitation, durable medical equipment, diagnostic tests, imaging, and preventive care.
3 The specific deductible ranges used in the study were $0-$1,999, $2,000-$3,999, $4,000-$5,999, and $6,000-$7,999. Not every city examined had Health & Human Services records for both nonprofit and for-profit plans in every deductible range. Premiums were only compared when there were multiple representatives of each health plan type within a given deductible range.
4 An average premium had to be at least 3% lower than the competing average to be classified as the lowest average. Differences under that percentage were considered a tie.
5 See HealthPocket’s earlier study “1 in 3 Health Plans’ Out-of-Pocket Costs Fail ACA Standards” /healthcare-research/infostat/1-3-health-plans-out-of-pocket-costs-fail-aca-standards/
6 The total of the three percentages equals 101% due to rounding issues on the three components within the total.
7 For example, nonprofit plans cannot sell stock to raise capital.