Uneven Premiums Based on Gender Will End 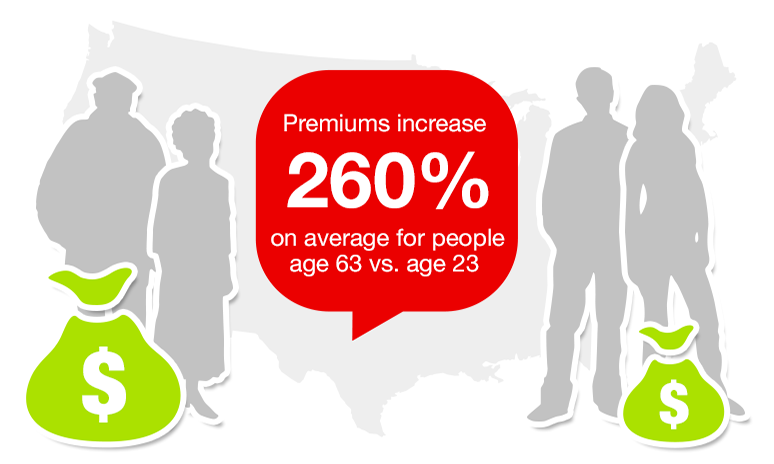 In most states, your health insurance premium is based on your age as well as other factors such as your gender, health, and smoking status. With respect to age, older people typically pay more than younger people since use of health care services statistically increases with age.1 The Affordable Care Act will limit in 2014 how much a health plan can charge the oldest enrollees as compared to the youngest enrollees. Specifically, the oldest enrollees will not pay more than three times the premium amount of the youngest enrollees who live in the same region and share the same status with respect to smoking.

Some industry analysts have warned that this limitation will raise the premiums of enrollees in their twenties to subsidize the premiums of the more costly enrollees in their fifties and sixties.2 To determine if this warning is well-founded, HealthPocket analyzed the premium data for 3,629 individual and family health plans across the United States to establish whether the existing premium difference between young and old enrollees exceeds the limit set by the Affordable Care Act. For every plan, premium quotes in the two largest metro regions of each state were obtained for nonsmoking men and women ages 23, 30, and 63.3 By using both male and female quotes for each of the three ages, we could also evaluate if age-based increases in health premiums were unequally applied to men and women.

Our nationwide analysis revealed that premiums increase 260% on average for 63 year-olds versus 23 year-olds, an amount that is well over the 200% limit imposed by the Affordable Care Act. Consequently, for most states the new premium limit related to age is likely to cause significant premium increases for young adults enrolling in the new Affordable Care Act health plans (as compared to existing health coverage). The limit in age-adjustment is only one of many factors that can potentially affect health insurance premiums. Prior HealthPocket research4 on current benefit levels as well as health insurance application rejection rates suggest that individual & family health plans will need to offer more benefits to enrollees under the Affordable Care Act and these enrollees will include more costly individuals with health conditions who previously could not obtain affordable health insurance coverage in the commercial market. Both of these factors, particularly the enrollment of the previously uninsured with pre-existing medical conditions, 5 are more likely factors that raise monthly health insurance premiums than age-based premium increase limitations. Moreover, insurance premiums increases and decreases are specific to a person’s circumstances. For example, people with chronic health conditions may pay less than they do currently while the healthy may pay more.

Most states had average age-based increases that exceeded the limits set forth by the Affordable Care Act. Delaware, Oregon, Alaska, and Wyoming, for example, all had average premiums for 63 year-old residents that were over 350% higher than the premiums quoted for 23 year-old residents. However, some of the most interesting age-based premium differences were not among the states but between the rates offered to men and women.

The Difference Between Men & Women 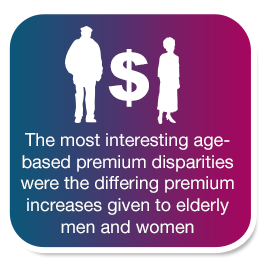 The question of whether this gender gap in health insurance premiums is discriminatory is both actuarial and philosophical. Women are statistically associated with higher healthcare costs than men. A government study of 2004 medical claims data revealed that women accounted for 57% of personal healthcare spending as compared to 43% for men.6 However, this difference in healthcare spending does not mean that gender gap in insurance premiums always reflects the difference in male and female healthcare expenses at a given age. From a philosophical perspective, some people feel any gender-based differences in premiums reflect a bias regardless of any actuarial considerations. The Affordable Care Act is aligned with this latter position and will prohibit gender-based premium differences in 2014.

The presence of a gender gap in health insurance premiums was not uniform across the United States. Some states had the same age-based premium increases for both women and men. These states were California, Colorado, Maine, Massachusetts, Minnesota, Montana, New Hampshire, New Jersey, New York, North Dakota, Oregon, Washington, and Vermont. Washington D.C. also had the same level of premium increases for women and men.

In our analysis Alabama also had the same premiums for men and women but this was likely due to limitation on plan data for Alabama. The states mentioned earlier have formal regulations prohibiting gender differences in health insurance premiums.

The Affordable Care Act’s anticipated effect on health insurance premiums is one of the most hotly debated subjects in contemporary healthcare discussions. HealthPocket’s analysis demonstrates that this legislation will have uneven outcomes across the states with respect to its age and gender pricing rules. The prohibition on gender-based health insurance pricing will affect premiums in three quarters of the states where legislation does not already bar this practice. The consequence of this prohibition appears to be affected by the health plan enrollee’s age.

Given these results, HealthPocket suspects that the actual dollar amount of the Affordable Care Act health insurance premiums will be a matter of greater concern for most consumers rather than its effects on age and gender influenced pricing.

Consumers can compare how different health plans in their area differ in premium quotes for their age and gender at HealthPocket.com.

* An earlier edition of this 2013 report had an incorrect interpretation of the maximum premium limit for Affordable Care Act-compliant health plans. This issue was corrected in this edition of the report.

Results of the study were based on an analysis of 3,629 health insurance plans available within the two largest metropolitan regions in each state. Health plans were limited to the individual and family insurance market for consumers under the age of 65. Health plans from the Medicare, Medicaid, and employer-based health insurance markets were not included within this study. Premium averages were not weighted for enrollment. The data used in this study was obtained from insurance records made public by the Department of Health & Human Services. The data was collected on April 9, 2013. Premium quotes were generated for each health plan based on the following profiles:

This study was completed by Kev Coleman, Head of Research & Data at HealthPocket.com. Correspondence regarding this study can be directed to Mr. Coleman at kevin.coleman@healthpocket.com. Feedback and questions are welcome but, given the volume of email, personal responses may not be feasible.