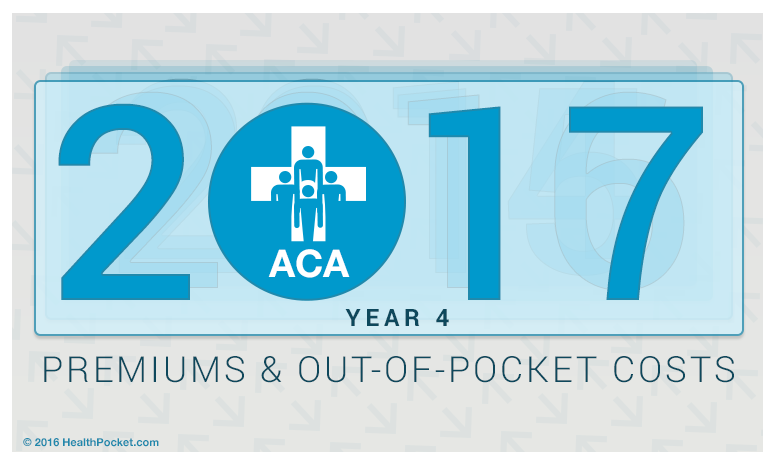 The months preceding the release of 2017 rates and deductibles for Affordable Care Act plans have been filled with worrying reports of massive rate increases in some regions,1 the loss of health insurance companies from various government marketplaces,2 a significant increase in counties with only one insurer option,3 and the continued collapse of the CO-OP health insurance companies.4 It is against that background that HealthPocket examined the government’s release of 2017 Affordable Care Act (a.k.a. Obamacare) health plan data. HealthPocket’s analysis provides a detailed overview of market conditions facing consumers who have neither premium subsidies nor subsidies for healthcare out-of-pocket costs.

Below is the comparison of 2017 average premiums across the United States. The averages are compiled according to the four standard metal tiers for Affordable Care Act health plans. Note that the premium and cost-sharing averages assume a nonsmoking individual insurance applicant and does not include any government subsidies that might be applied.

Comparative 2016 average premiums are based on the same type of government landscape data files that were used for the 2017 average premiums.5 Since market conditions are evaluated in this study rather than consumer behavior in response to those conditions, no weighting by enrollment was performed on the health plan data.

Individual and family averages are provided for deductibles as well as the annual limits on out-of-pocket costs for covered medical services delivered by in-network healthcare providers (labeled in the tables as “Max Out-of-Pocket Costs”). In 2017, the maximum allowable cost-sharing (including out-of-pocket costs for deductibles, co-payments, and co-insurance) is $7,150 for self-only coverage and $14,300 for families.6

Bronze plans are the entry-level plans within the Affordable Care Act offerings and have no special eligibility requirements as is the case with “catastrophic plans.” They have the lowest premiums and highest deductibles on average among the four standard tiers of Obamacare health plans. When compared to average premium nationwide for bronze plans in 2016, HealthPocket found that the average premium for 2017 has risen by 21%.The below table illustrates the average bronze plan premiums for nonsmoking individuals at different age profiles.

Silver plans are the most popular plan among consumers who receive premium subsidies on state-run health insurance exchanges. For the unsubsidized consumer, he or she has to decide if the lower deductibles of a silver plan is worth the higher premium given the consumer’s personal health care usage.

The average premium nationwide for 2017 silver plans is 17% higher than the year before. In terms of actual dollars spent annually on health insurance, a 40 year-old nonsmoker, for example, will pay over $716 more on premiums in 2017 if her premium amount matched the annual trends for the last two years.

The average 2017 deductible for silver plans experienced more than double the rate of year-over-year cost increase as compared to the increase observed for bronze plans. The 2017 average deductible for individuals ($3,572) is approximately 15% more expensive than 2016’s average of $3,117. Likewise, the average family deductible is up to $7,474 in 2017 as compared to $6,480 in 2016.

The 2017 gold plan deductible for an individual was only 3% higher than the average observed among gold plans for 2016.

Though previous studies by HealthPocket have called attention to the affordability challenges of Obamacare plans faced by unsubsidized populations, they have not examined how enrollee age contributed to this issue. In most states, Affordable Care Act health plans adjust premiums higher for adult enrollees. However, this age adjustment is not linear. Premiums increase more dramatically for enrollees in their 50s and 60s as compared to enrollees in their 20s and early 30s.7 The Affordable Care Act limits age-based premium adjustments so that the premium for a 64 year-old cannot be more than 300% the premium of a 21 year-old. 8

HealthPocket found that the percentage of monthly income needed to pay the average unsubsidized Obamacare premium can present considerable financial challenges to older adults. For example, when examining an individual who makes $48,000 annually (just above the $47,520 cut-off for individual premium subsidy eligibility in 2017) 60 year-olds would need to spend 22% of their income to afford the average silver plan premium while 30 year-olds would only need to spend 9%.

With respect to 2017, it is immediately evident that the market conditions facing the unsubsidized are getting considerably worse. The percentage increase in average premium for each category of Obamacare nationwide is in the double-digits. Deductibles among bronze and silver plans, the plans more likely to be purchased by people without subsidies, are still considerably beyond what the average family has saved for medical bills. A recent Bankrate survey found that only 37% of Americans had $500 to $1,000 in savings to cover an unexpected emergency bill.9 Against that fiscal reality, the average bronze plan deductible of $6,092 and silver plan deductible of $3,572 blur the lines between being insured and uninsured. While for years the plight of the unsubsidized population was largely ignored, HealthPocket’s 2016 study10 estimating their size in the tens of millions has begun to sensitize journalists11 to the insurance affordability challenges they face. Hopefully, in turn, these journalists can widen future political dialogue about health care reform to include their plight.