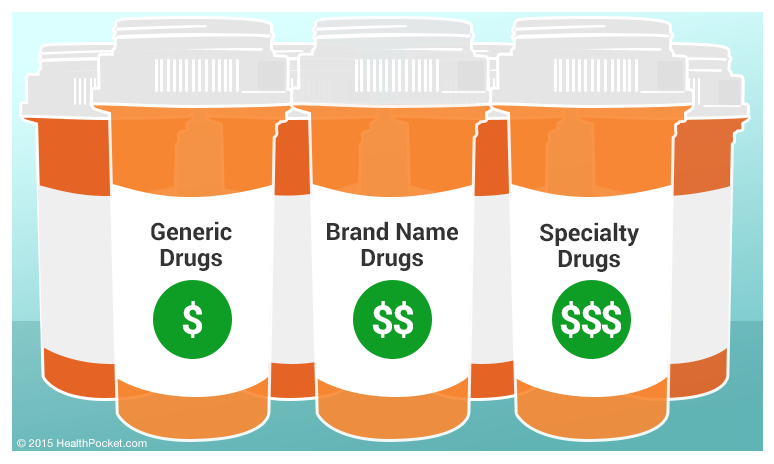 Discussions of U.S. drug spending often focus on retail price increases, overlooking the portion of drug costs paid by insured consumers in the form of out-of-pocket expenses. While rising drug expenditures affect insurance premiums as insurers spread their costs across their enrollees, it is drug out-of-pocket expenses that are among the greatest concerns for consumers dependent on prescription medications.

Using government data on Affordable Care Act health plans sold on the Healthcare.gov marketplace, HealthPocket examined the health insurance out-of-pocket costs for generic drugs, preferred brand name drugs, non-preferred brand name drugs, and specialty drugs. It should be noted that the out-of-pocket expenses only apply to prescription medications covered by an insurer. Which drugs are covered varies by insurer because insurers are not required to cover all FDA approved medications. Instead, for Affordable Care Act health plans, insurers must cover as many drugs in each therapeutic category as the benchmark health plan chosen for the state, with no less than one drug covered within a drug category.1 Uncovered drugs typically have no cost-sharing assistance from an insurer and an enrollee’s money spent on uncovered drugs does not benefit from any annual cap, as is the case for covered medications.

Below in Table 1 are the average out-of-pocket fees for the different categories of drugs covered by 2016 Affordable Care Act plans. Insurance cost-sharing fees come in two forms: copayment and coinsurance. Copayments are fixed dollar amounts paid out-of-pocket for a medication and coinsurance is a fee where the health plan enrollee pays a portion of the drug’s price while the insurer pays the remainder. For example, if an enrollee were charged a 33% coinsurance fee for a $100 medication then he or she would pay $33 out-of-pocket for that medication. During the deductible period, the enrollee would pay 100% of medication expenses up to the amount of the health plan deductible at which point cost-sharing from the health plan would begin. Some health plans have a lower drug deductible that is separate from the deductible that applies to other medical services. Among 2016 Affordable Care Act plans, only 8% of entry-level bronze plans have separate drug deductibles as compared to 60% of high-end platinum plans. For silver plans, the most popular of Affordable Care Act plans, less than half (41%) of plans have a separate drug deductible.

Not surprisingly, out-of-pocket costs generally decreased as the health plan category increases, though there were exceptions. These exceptions to the trend were isolated to the averages for platinum plans and may be a product of the lower inventory of plans within this metal plan category.

Comparisons to 2014 & the Rise of Specialty Drug Costs

When comparing average drug out-of-pocket fees in 2016 Affordable Care Act plans to the average drug out-of-pocket fees in the first year of “Obamacare,”2 HealthPocket found inconsistent changes (see Table 2 below). For lower cost generic drugs, copayments were the most common form of out-of-pocket fee and copayments decreased for silver, gold, and platinum plans. Only bronze plans, popular among unsubsidized enrollees, saw increases in copayments compared to 2014 averages (see table below). Coinsurance fees for generic drugs were less consistent. In 2016, the average coinsurance fee charged for generic drugs decreased for silver and gold plans but increased for bronze and platinum plans.

Cost-sharing for expensive specialty drugs, however, evidenced more consistent changes from 2014 to 2016. The average copayment costs increased dramatically, ranging from 16% to 71% depending on the health plan category. Coinsurance fees, the most common form of cost-sharing for specialty drugs increased for three-out-of-four health plan categories examined. Only silver plans had the same average coinsurance fee for specialty drugs in 2014 as they did in 2016. Increases for the other three plan categories averaged from 7% to 20%. Increases in the percentage of a specialty drug’s price paid by the enrollee is a substantial financial concern for people taking these drugs since this class of medications has also had their base medication prices increase substantially in recent years. A 2015 study by the AARP Public Policy Institute found that the retail prices for 115 widely-used specialty drugs surged 10.6% from 2012 to 2013.3 Table 3 below illustrates how the combination of specialty drug price increases and increased coinsurance fees for specialty drugs can result in hundreds of dollars more in monthly out-of-pocket costs . In 2016, the Affordable Care Act caps out-of-pocket costs for covered drugs and medical services at $6,850 for an individual and $13,700 for a family.4

The Centers for Medicare & Medicaid Services (CMS) reported last month that U.S. spending on drugs increased by 12.2% last year.6 CMS attributed this increase, which was the largest annual increase since 2002, in part to drugs that are typically within the specialty classification.7 Even for consumers with insurance coverage, the combination of base price increases for specialty drugs and increases in cost-sharing within health plans is contributing to a painful escalation in out-of-pocket costs. While consumers taking specialty drugs represent a small segment of the population, their extreme financial burden combined with the seriousness of the health conditions that typically require specialty drugs may result in a public outcry8 that motivates pharmaceutical manufacturers, insurers, and the government to collaborate on ways to reduce costs.

All analysis assumes the accuracy of the underlying government data. While every effort was made towards a representative collection of plans, HealthPocket makes no representation that every plan within the individual insurance market or in an individual state was included in this study. Percentages are rounded according to standard industry practices. No weighting of cost-sharing averages by health plan enrollment was performed.

For both 2014 and 2016 price estimates, costs of Humira were estimated using CVS Pharmacy price quotes and standard adult dosages from GoodRx.com.

This analysis was written by Kev Coleman, Head of Research & Data at HealthPocket with primary data research performed by Jesse Geneson, Data Scientist at HealthPocket. Correspondence regarding this study can be directed to Mr. Coleman at kevin.coleman@healthpocket.com.