Average deductibles increase or decrease depending on metal tier 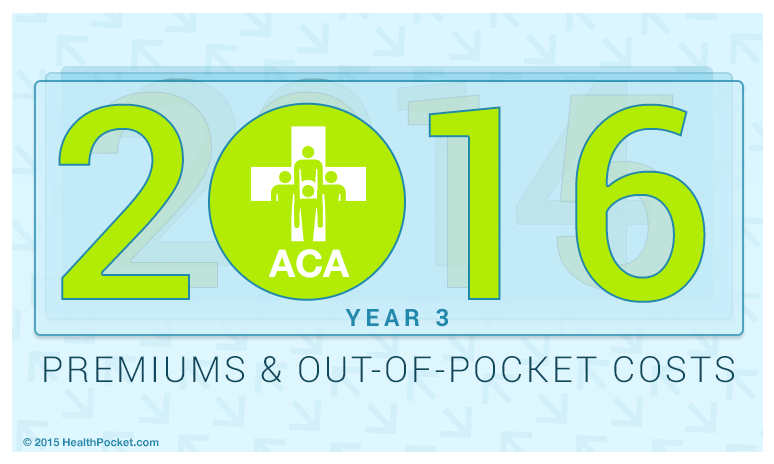 The third enrollment season for the Affordable Care Act brings with it less confusion among consumers and greater technical stability among government exchanges. What has not changed from the first enrollment season is a high degree of scrutiny over premiums and deductibles from consumers as well as the press. A pre-enrollment season of insurance rate filings in 45 states found the average rate increase requested by insurers was 12%.1 With the recent government release of data on next year’s Affordable Care Act (ACA) plans, HealthPocket examined the average premiums, deductibles, and out-of-pocket cost caps for 2016.

HealthPocket averages were for the available market options across geographies prior to subsidization. While proposed increases in 2016 rate filings for Affordable Care Act plans attracted media attention, it only illuminated a partial story. Alongside existing plans that were changing their rates from 2015 to 2016, there were also market entrants and exits for the 2016 plan year that affected the average available premiums and deductibles in the privately purchased health insurance market. With respect to the 2016 ACA market, CNBC reported that there will be up to 12% fewer health plans offered on Healthcare.gov in 2016.2 In comparison, 2015 had enjoyed an increase of 25% with respect to the number of insurers offering Affordable Care Act plans in 2015 versus 2014.3

Below is the comparison of average premiums by metal tier for all 2016 Affordable Care Act health plan records made available by the federal government on October 23, 2015. Note that the premium averages assume a nonsmoking individual insurance applicant and does not include any government subsidies that might be applied to the premium amount based on income eligibility.

Comparative 2015 average premiums are based on the same type of government landscape data files that were used for the 2016 average premiums, with the 2015 plan data made available in November 2014.4 Since market options were evaluated in this study rather than consumer behavior, no weighting by enrollment was performed on health plans.

Silver Plans are the most popular purchased health plan type on exchanges. The government has promoted widely that “7 in 10 returning Marketplace consumers will be able to buy a plan for $75 or less in monthly premiums after tax credits in 2016.”5 Additionally, the government promoted that the second lowest cost silver plans offered on Healthcare.gov, upon which subsidies are based, will increase in unsubsidized premiums at a 7.5% average rate.6

The rate of increase in average deductible for silver plans was more modest than bronze plans. The average 2016 deductible for an individual is 6% higher than what was observed for 2015 while the average family deductible rose by 8% in 2016.

Gold plans, along with platinum plans, are often considered ‘higher-end’ plans within the Affordable Care Act market due to their costlier average premiums and more generous out-of-pocket cost protections.

Platinum plans provide the greatest cost coverage of medical expenses by the health plan for its enrollees. As such, their out-of-pocket costs are typically the lowest and their premiums are typically the highest as compared to the other Affordable Care Act metal tiers.

When assessing options across the Affordable Care Act market, rate increases on existing plans as well in changes in the number of plans has resulted in double-digit increases in the average cost of premiums available within the market as represented in the government data. For the unsubsidized, this premium increase will likely be met with great concern. For the subsidized, government assistance limiting the cost of premiums to a percentage of earnings will erode the significance of the 2016 premium changes.

Premium averages assume an individual nonsmoking adult for the following age profiles: 30, 40, 50, and 60 year-olds. Deductibles represent medical deductibles. Drug deductibles were not examined in this study.

This analysis was written by Kev Coleman, Head of Research & Data at HealthPocket with primary data research performed by Jesse Geneson, Data Scientist at HealthPocket. Correspondence regarding this study can be directed to Mr. Coleman at kevin.coleman@healthpocket.com.