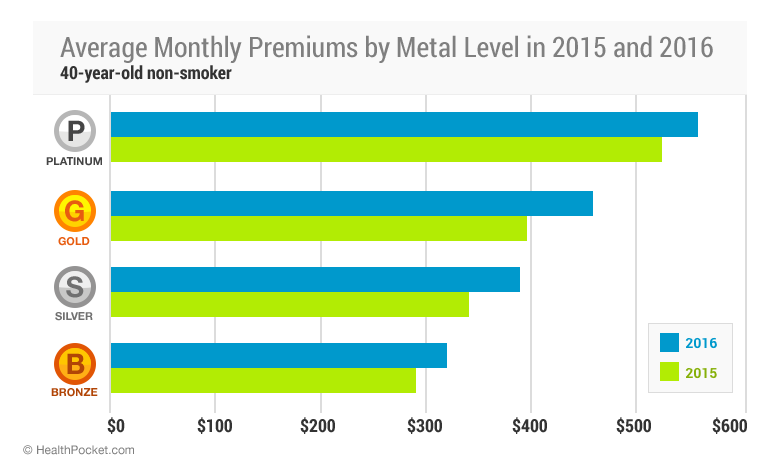 To increase price transparency for consumers, the Centers for Medicare & Medicaid Services (CMS) posted data on rate increases of 10% or more for 2016 Obamacare health insurance premiums1. The data that CMS posted was based on rate filing requests submitted by health insurance companies for 2016 ACA-compliant health products both on and off the public health insurance marketplaces.

Premium rates for Obamacare plans depend on many factors including coverage benefits and provider network type. Obamacare plans are classified into four metal levels depending on the percentage of costs that they typically pay for covered healthcare services. A bronze plan pays 60% of covered costs for a standard population, a silver plan 70%, a gold plan 80%, and a platinum plan 90%. Obamacare plans also have four provider network types: Health maintenance organizations (HMOs), Exclusive Provider Organizations (EPOs), Point of Service (POS) plans, and Preferred Provider Organizations (PPOs). PPOs and POS plans cover out-of-network care2, while HMOs and EPOs do not. EPO and PPO plans do not require referrals from primary care doctors to see specialists, but HMO and POS plans require referrals.

Why Are 2016 Affordable Care Act Rates So Important?

The largest factors influencing health insurance premiums are the rate of healthcare usage among plan enrollees and the cost of delivering that care to them. When insurance companies proposed premium rates for the first year of the Affordable Care Act, 2014, they had guessed what services would be used and how frequently the use would occur because the Affordable Care Act had opened the door in the privately purchased health insurance market to people who had been previously rejected from coverage due to costly pre-existing conditions. The Affordable Care Act’s prohibition on denying coverage based on health considerations meant that the composition of the enrollee pools would change from what they were during the pre-reform period. Less healthy enrollees who used more care would become a larger portion of the enrollee pools.

For the following year, 2015, rates were proposed based on less than a half year’s healthcare usage data since 2015 rates were filed towards the middle of 2014. Additionally, millions enrolled after the beginning of 2014, further limiting what data was available to insurers.

The partial data problem for rate proposals was further exacerbated by health plan deductibles. Deductibles are front-loaded; that is to say, they begin when insurance coverage becomes effective. Deductibles can slow the rate of healthcare usage until they are satisfied because consumers are paying full price out-of-pocket for medical services. Since 2015 rates were based on healthcare usage at the beginning of 2014, it is likely that deductibles had a more prominent influence on the healthcare usage data than if the data had included a full year of medical claims.

2016 health insurance rates, in contrast, are based on a full year’s healthcare usage data from 2014 as well as partial data from 2015. Accordingly, the public will receive a better representation of the costs of Affordable Care Act coverage in the 2016 rates by virtue of their reliance on more complete data.

HealthPocket examined premium costs in public rate filings for 2016 Obamacare plans in 45 states3. Premiums were compared for 40-year-old non-smokers in the largest city in each state. On average the proposed premiums for 2016 Obamacare plans were 12% higher than the 2015 premiums. Silver and gold plans had the greatest average rate increases of 14% and 16% respectively, while bronze rates increased 9% and platinum rates increased 6%.

Bronze plans were the second most popular metal plan in 2015, making up 22% of marketplace plan selections4. Among different types of bronze plans, EPOs and HMOs had the greatest percentage increases in premium costs of 20% from 2015 to 2016. Bronze POS premiums increased 15%, while bronze PPO premiums were only up 4%.

Silver plans were the most popular metal plan during the 2015 open enrollment period, accounting for 67% of marketplace plan selections5. Silver EPOs had the greatest percentage increase (20%) in premium rates from 2015 to 2016 among the types of silver plans, followed closely by HMO plans at 19%. Premiums for silver POS plans were up 15%, while silver PPO premiums were 11% higher.

Only 7% of marketplace plan selections during the 2015 open enrollment period were gold plans6. For gold plans, the percentage increases in premium rates were relatively consistent across provider network types. HMOs were the highest at 20%, while EPOs and PPOs were the lowest at 14%.

Average Monthly Premiums for Platinum Plans in 2015 and 2016, 40-year-old non-smoker

Platinum plans were the least popular metal plan during the 2015 open enrollment period, accounting for only 3% of marketplace plan selections7. Platinum plans had the greatest variation in premium changes across provider network types. Premiums were up 27% for platinum HMOs, but down 8% for platinum PPOs. Platinum EPOs and POS plans had 13% and 15% increases respectively. 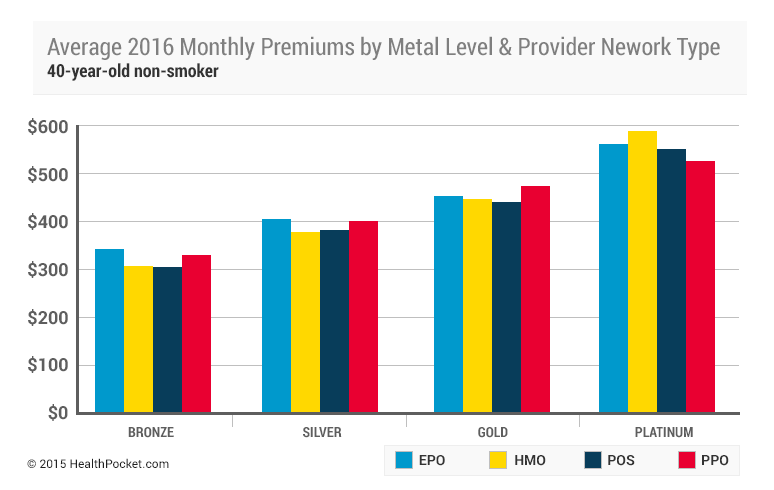 On the eve of the King v. Burwell Supreme Court decision that may eliminate health insurance subsidies on the federal health insurance exchange, the matter of unsubsidized premiums is of the highest importance to the public. Millions using the federal health insurance exchange may be left to face the unsubsidized cost of exchange plans and the affordability of these premiums is of central concern. In our review of 2016 rate filings, HealthPocket observed a 12% average rise in premium rates, with the greatest rate increases in silver plans (14%) and gold plans (16%). Among provider network types, HMOs and EPOs had the greatest average premium increases of 20% and 18% respectively.

Data in this study regarding 2016 health plan premiums was derived from qualified health plan rate filings within the individual and family health insurance market for the calendar year beginning January 1, 2016. Premium data for a 40-year-old non-smoker was collected for bronze, silver, gold, and platinum plans in the individual health insurance market, as well as HMOs, EPOs, POS plans, and PPOs. Small group, large group. Medicare, and other health plans outside the individual market were not included in this study. On-exchange stand-alone dental plans were also excluded from this study.

This analysis was written by Jesse Geneson, data researcher at HealthPocket, and Kev Coleman, Head of Research & Data at HealthPocket. Additional data collection and analysis was performed by Katherine Bian. Correspondence regarding this study can be directed to Mr. Geneson at jesse.geneson@healthpocket.com.