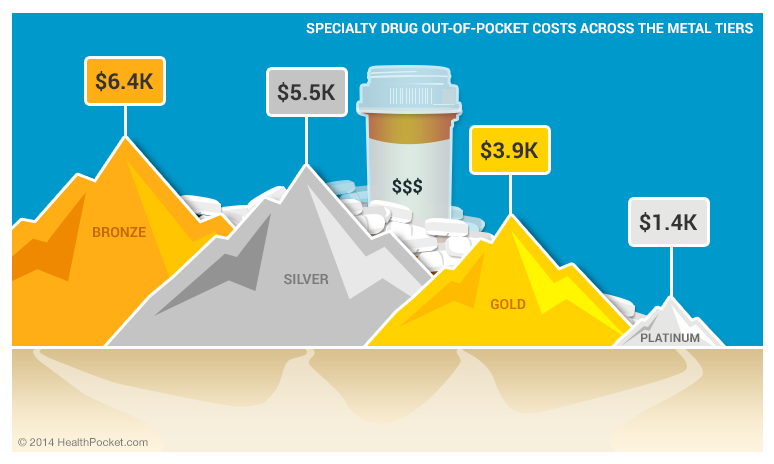 The Affordable Care Act (ACA), also known as Obamacare, required all health plans in the individual and small group markets to cover prescription drugs. Before Obamacare was implemented, 82% of plans in the individual market covered prescription medications and 18% did not.5 The ACA also categorized health plans into four metal levels (bronze, silver, gold, and platinum) depending on the percentage of covered health costs that the plan pays for a typical enrollee. Plans in the same metal level can have different premiums, deductibles, copayments, and out-of-pocket limits. Generally bronze plans have the lowest premiums and the highest out-of-pocket costs, while platinum plans have the highest premiums and the lowest out-of-pocket costs.

For a 50-year-old consumer taking the cancer drug Gleevec, bronze plans incurred costs of approximately $11,400 on average, including both annual out-of-pocket costs and premiums. Platinum plans incurred an average total cost of about $9,700, even though their premiums were over $3,000 more expensive for the whole year than bronze plan premiums. The 50-year-old consumer’s average total costs for platinum plans were 12% lower than gold plans, 15% lower than bronze plans, and 17% lower than silver plans.

The cost comparisons between metal levels in this study only apply to their average costs. Although platinum plans incurred the lowest average total costs for specialty drugs among the metal levels, there were individual silver and gold plans with lower out-of-pocket costs than some platinum plans. Moreover there were individual bronze plans with lower annual out-of-pocket costs than some silver and gold plans.

Instead of choosing a plan based on metal level, a consumer can reduce their health care expenses by estimating their total annual costs for each available plan. For consumers taking very expensive specialty drugs such as Gleevec, out-of-pocket costs for Obamacare plans that cover those drugs will usually be close to the sum of the annual premiums and out-of-pocket limits. Consumers with any prescribed drugs should also verify that their drugs are listed in their plan’s formulary. Regardless of its maximum out-of-pocket limit, a plan will not cover costs for prescription drugs that are not contained in its formulary. Additionally, there are no limits on annual out-of-pocket costs for enrollee medications outside the health plan’s formulary.

Data for this study was obtained from qualified health plan rate filings within the individual and family health insurance market with effective date January 1, 2015. Cost-sharing data was collected for bronze, silver, gold, and platinum plans in the individual health insurance market. Small group, large group, Medicare, and other health plans outside the individual market were not included in this study. On-exchange stand-alone dental plans were also excluded from this study. The costs examined were premiums, deductibles, annual limits on out-of-pocket costs, and copayments/coinsurance for prescription drugs.

Rate filings were gathered from Arizona, Connecticut, Indiana, Maine, Michigan, North Carolina, Rhode Island, Tennessee, and Virginia. Rate filings must be approved by the state department of insurance and thus may be rejected or may require alteration before final approval is given to the health plan. When discrepancies existed in the filings, plan attributes entered as inputs in the actuarial calculations were used.

HealthPocket obtained the top five specialty condition therapy classes ranked by 2013 per-member-per-year spending from Express Scripts’ April 2014 report on 2013 specialty drug spending. For each specialty condition, the top specialty drug by market share was selected for inclusion in this study. For each drug, costs of a year of prescriptions were estimated using CVS Pharmacy price quotes and standard adult dosages from goodrx.com. All cost estimates assume no reduction in premiums or cost-sharing due to income-based government subsidies.

This analysis was written by Jesse Geneson, data researcher at HealthPocket, and Kev Coleman, Head of Research & Data at HealthPocket. Additional data collection and analysis was performed by Katherine Bian. Correspondence regarding this study can be directed to Mr. Geneson at jesse.geneson@healthpocket.com.