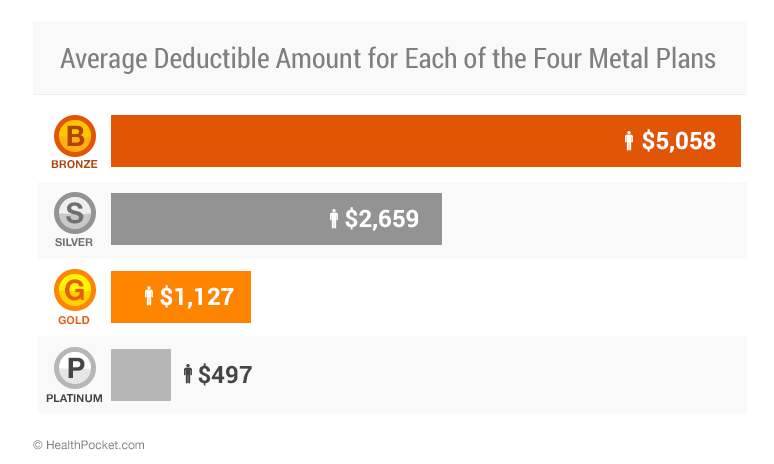 As rate filings for 2015 Affordable Care Act health plans become public, virtually all media attention has focused on premium changes. What have been ignored are the changes in the plans’ out-of-pocket expenses. Inasmuch as deductibles and physician fees have the potential to add thousands of dollars in annual healthcare expenses, media disregard of health plan cost-sharing is especially unhelpful to the portion of the public who uses healthcare services regularly.

HealthPocket examined major out-of-pocket cost categories within public rate filings for 2015 Affordable Care Act plans in 9 states.1 When compared to out-of-pocket costs for 2014,2 deductibles in the early public rate filings decreased with the exception of platinum plans. For bronze plans, the decrease was less than one percent as compared to 9% and 12% decreases for silver and gold plans respectively. Platinum plans had a major increase (43%) in in its average deductible.

Expenses for doctor and specialist visits also changed differently among metal plans. In the 2015 bronze plan rate filings, copayment fees were more common than a coinsurance charge where a patient was charged a percentage of the overall cost of the doctor visit. In 2014, the reverse was true for bronze plans. Coinsurance fees remained the most common charge for specialist visits among these plans, and that fee increased by 17% within the rate filings.

Silver and gold plans both saw decreases in doctor and specialist fees. Platinum plans, in contrast, saw expenses in both of those categories rise within the 2015 rate filings.

The tables below summarize the differences between 2014 and 2015 out-of-pocket costs for each of the Affordable Care Act metal plans.

Cost-sharing for silver plans available to people making up to 250% of the Federal Poverty Level (FPL) was not included in the averages due to the special eligibility requirements for these plans.

Actuarial Value Not a Reliable Indicator of Out-of-Pocket Costs

When comparing major cost-sharing categories among metal plans, we see that the metal plans’ out-of-pocket costs do not align closely with the metal plans’ differences in actuarial value. Designing health plans around actuarial values was originally intended to simplify shopping5 but the comparison in average cost sharing demonstrates that the average expenses among deductibles, doctor fees, specialist fees, and other out-of-pocket costs do not change in ways consistent with differences in actuarial levels.

The below table illustrates how out-of-pocket costs change compared to the metal tier that proceeded it.

* The bronze plan had a coinsurance fee while the silver plan had a flat fee copayment amount.

As the table above demonstrates, changes in deductibles and physician copayments do not change proportionally with the actuarial value changes among metal tiers.

Available data from the public 2015 rate filings reveal the changes in out-of-pocket costs are not following a consistent trend among the different metal plans. Differences in plan actuarial value is not necessarily helpful in understanding how out-of-pocket costs will differ. However, it is unclear whether this state of affairs will continue as more states release their rate filings to the public.

The rate filings process itself is problematic with respect to consumer transparency. Not all states have released their filings. In order for consumers to have a meaningful role in the process of American healthcare reform, data such as health insurance rate filing documents should be made available for public scrutiny prior to approval of rates. Moreover, a standardization of the rate filings in a format that allows for easy loading into data analysis tool would speed the ability of researchers to provide initial data analyses to the public for their review and potential improvement.

Data in this study regarding health plans was derived from qualified health plan rate filings within the individual and family health insurance market for the calendar year beginning January 1, 2015. Cost-sharing data was collected for bronze, silver, gold, and platinum plans in the individual health insurance market. Small group, large group. Medicare, and other health plans outside the individual market were not included in this study. On-exchange stand-alone dental plans were also excluded from this study. The cost-sharing categories examined were deductibles, annual limits on out-of-pocket costs, and fees for doctor and specialist visits. Other cost-sharing categories such as prescription medication co-payments, Emergency Room charges, or co-insurance fees for major medical procedures were not included in this study. All out-of-pocket costs assume covered medical services delivered by in-network healthcare providers.

Rate filings were gathered from the following states:

Rate filings must be approved by the state department of insurance and, as such, may be rejected or may require alteration before final approval is given to the health plan. Disapproved or withdrawn filings were not included in the study. When discrepancies existed within the filings, plan attributes entered as inputs within the actuarial calculations were given privilege.

All out-of-pocket costs assume in-network delivery of covered medical services and no reduction in cost-sharing due to income-based government subsidies.

This analysis was written by Kev Coleman, Head of Research & Data at HealthPocket, and Jesse Geneson, data researcher at HealthPocket. Additional data collection and analysis was performed by Katherine Bian. Correspondence regarding this study can be directed to Mr. Coleman at kevin.coleman@healthpocket.com.