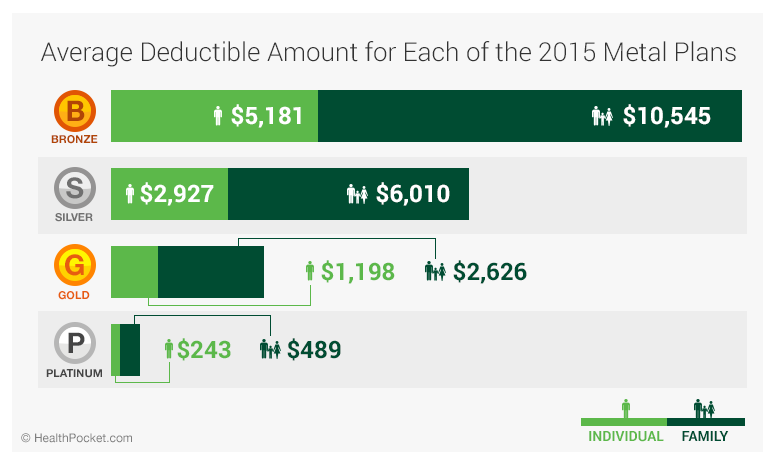 With the enrollment season for the second year of Affordable Care Act health plans commenced, consumers who purchase their own health insurance are again comparing deductibles and other healthcare out-of-pocket costs. The first enrollment year for the Affordable Care Act brought with it average deductibles for bronze, silver, and gold plans that surpassed the amounts needed to qualify them as high deductible health plans.1 The average deductible for the platinum plan was alone among the new “metal plans” to fall under the threshold for a high deductible health plan.2

Commentary – Bronze plans are the most commonly purchased Affordable Care Act plan by consumers who shop off-exchange.4 Since premium subsidies are available on-exchange, off-exchange shoppers are assumed to represent a population that is largely ineligible for those subsidies. The average bronze plan deductible for 2015 is $5,181, up from $5,081 in 2014.5 The average 2015 bronze plan deductible for an individual is 326% higher than the average deductible amount documented for employer-sponsored health plans (deductibles in employer-sponsored health insurance were $1,217 on average for individual coverage according to the Kaiser Family Foundation’s 2014 Employer Health Benefits Survey).6

At $6,373 for individuals and $12,749 for families, the average caps on annual out-of-pocket costs for covered medical services delivered in-network were similar to 2014 levels.

Commentary – Silver plans are the most frequently purchased metal plan type on government health insurance exchanges.8 For those people ineligible for cost-sharing subsidies, the average silver plan deductible amount was very similar in 2015 to the levels observed for 2014, the individual deductible being approximately 1% higher in 2015 and the family deductible approximately 1% lower in 2015. Caps on out-of-pocket costs were also within 1% of 2014 averages.

The average copayment for doctor visits in 2015 decreased by 9% to $29 while the average cost of a specialist visit rose $1 to $57.

The average cost of doctor and specialist visits declined by $1 in 2015 to $23 and $45 respectively.

Commentary – Platinum plans evidenced the greatest improvement in average deductible amounts compared to 2014. The average individual and family deductibles are 30% lower than the averages documented for 2014.11 In contrast, the annual cap on out-of-pocket costs for covered medical services delivered in-network increased by 6% for both individuals and families in 2015.12

Some Affordable Care Act plans had a separate deductible that exclusively applied to covered prescription drugs. A smaller drug deductible than a overall medical deductible could allow insurance cost-sharing to begin earlier in the case of medications. With respect to individuals, HealthPocket found the following:

2015 marks another year where unsubsidized deductibles average over $1,000 for three of the four Affordable Care Act plan types. Gold and Platinum plans evidenced deductible improvements as compared to 2014 while bronze and silver plans were slightly higher.

Consumers should make note that deductible averages characterize a range of deductible amounts from lower to higher. Accordingly, for those consumers who expect to use healthcare moderately to frequently, careful attention should be paid to health plan cost-sharing before enrollment. In many cases, out-of-pocket copayment and coinsurance fees for physician visits apply after a deductible amount has been satisfied, meaning that the consumer would pay the full cost of the visit during the deductible period.

Those consumers making 250% or less of the 2014 Federal Poverty Level are eligible for cost-sharing subsidies that reduce deductibles, co-payments, and coinsurance fees.13 These cost-sharing reductions are only available on silver plans for those who qualify.14

Healthier consumers who expect to use healthcare infrequently should focus less on cost-sharing and more on premium expense and the quality of in-network healthcare providers in the event that a serious medical condition occurs.

This preview was written by Kev Coleman, Head of Research & Data at HealthPocket. Correspondence regarding this data can be directed to Mr. Coleman at kevin.coleman@healthpocket.com.