In August HealthPocket published an InfoStat that reviewed restrictions built into drug plans that are purchased by Medicare consumers either through a stand alone prescription drug plan (“PDP”) or a Medicare Advantage plan with an embedded prescription drug benefit (“MAPD”.) With the recent release of 2014 drug plan formulary data, an update to that report shows fewer drugs on average within MAPD formularies and the continuation of one MAPD provider, Kaiser, as an outlier in a positive way by having a relatively large number of drugs available with extremely few restrictions. 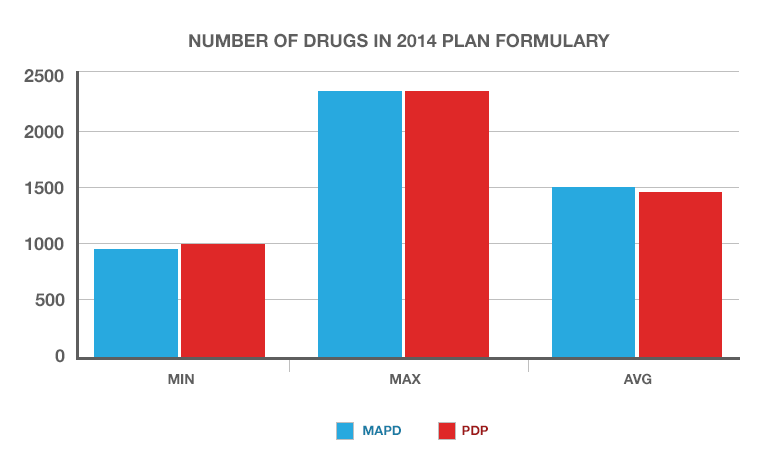 Trends toward narrow provider networks are becoming evident for Obamacare compliant health plans,2 and they have also been observed through pricing arrangements for preferential pharmacies within drug benefit networks.3 Recent reports have indicated this trend may move to provider networks for Medicare Advantage plans.4 HealthPocket reviewed the data published to date to determine if this trend can be seen in terms of a reduction in approved drugs on Medicare plans’ formularies. MAPD plans had larger formularies than PDP’s on average. 2014 saw a movement toward equalizing the size of those formularies. As a result, PDP formularies went up on average slightly from 1,431 to 1,456 drugs. However, MAPD formularies declined by 3 percent, from 1,542 in 2013 to 1,492 in 2014, as shown in the chart below. 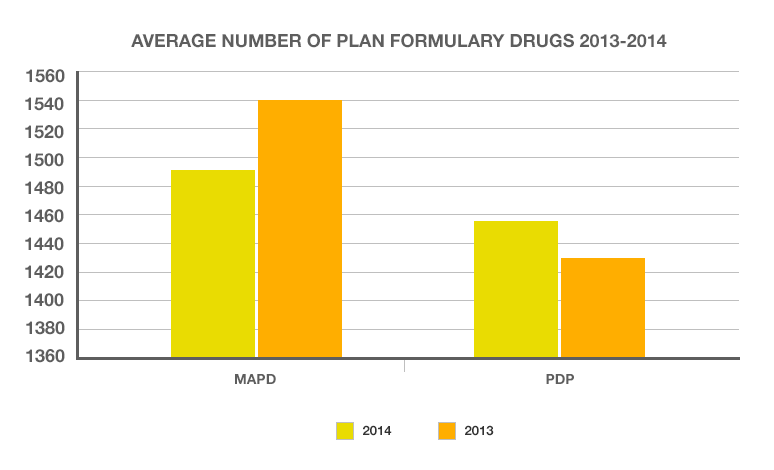 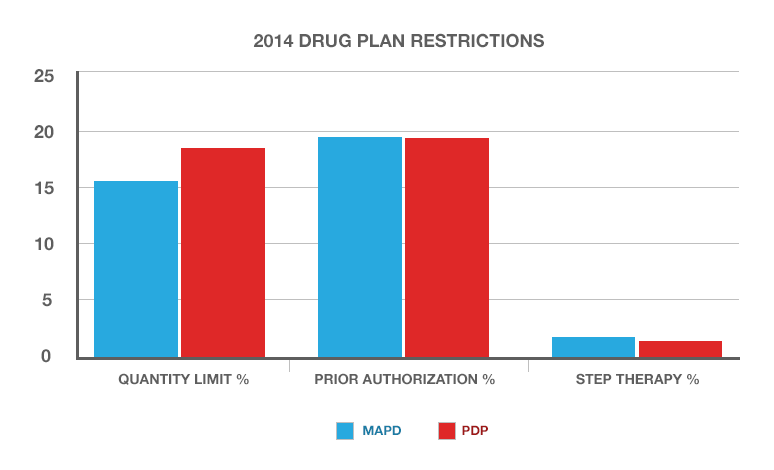 In reviewing specific plan data, one MAPD plan stands out as a positive example that takes a different approach. The Kaiser MAPD plan has 2320 drugs on its formulary, close to the industry maximum. However, it also imposes quantity limits and step therapy on none of its drug purchases and only imposes prior authorization on 66 drugs, which constitute 3 percent of all drugs on its formulary.

It is especially important that every drug someone takes is on a plan formulary. If it is not, the enrollee will have to pay the full cost out-of-pocket and the amount paid will not be part of the calculation for when a plan’s coverage gap (also known as “donut hole”) ends. HealthPocket helps consumers in this process by providing a free Medicare comparison tool so they can input their drug information and price and compare options.

As the ranges of plan restrictions show, some plans put up more hurdles to drug purchasing than others. What is unreasonable is a judgment call for consumers to make. Medicare also has an appeal process if a consumer believes that an exception to the restriction is needed because of their specific circumstance.5

Consumers and their advocates will need to be alert to trends that can affect the Medicare drug benefit. The first is the reduction of choice similar to the narrower physician networks and preferred pharmacies. The data does not indicate that this trend has made it to the quantity of drugs on plan formularies yet. A factor that suggests the future could see fewer restrictions is the ability of Kaiser, a MAPD plan that receives very high Medicare quality ratings,6 to manage the care of its enrollees with a large pool of drugs that are available with hardly any restrictions.

Drug information was taken from the Medicare public use file that includes the number of drugs on each plan’s formulary as well as restrictions, including quantity limits, prior authorization and step therapy. Medicare Part D prescription drug plans and Medicare Advantage with prescription drug plans were considered separately. MAPD plans included Medicare Advantage special needs plans. The formulary filings of the health plans could include more than one of their plans. The data were not adjusted for market share.

1 Government source documents cited in the prior InfoStat.
2 See, for example: http://www.nationaljournal.com/innovations-in-health/narrow-network-health-plans-expected-to-proliferate-under-obamacare-20131009.
3 See, for example: http://www.theihcc.com/en/communities/pharmacybenefitmanagement/express-scripts-walgreen-flap-opens-door-for-narroh4g1v5e3.html.
       4 Reports such as this one from Tampa Bay, FL indicate that UnitedHealthcare is cutting its MA network: http://www.tampabay.com/news/health/patients-scramble-after-aarp-medicare-advantage-plans-drop-providers/2148424.
5 See appeal process description: http://www.medicareinteractive.org/page2.php?topic=counselor&page=script&slideid=1580.
6 See: https://medicare.kaiserpermanente.org/wps/portal/medicare/plans/explore/whyjoinkp.