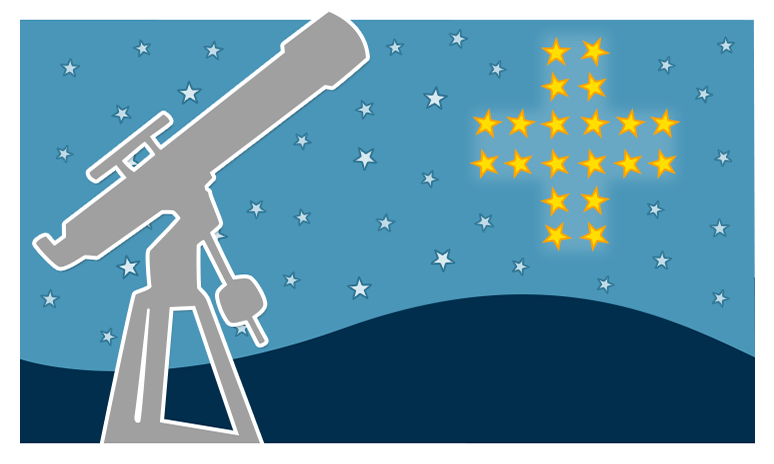 Medicare’s Annual Enrollment season is currently underway and will run to December 7. During this time enrollees can shop for Medicare Advantage and Part D Prescription Drug plans. In late September and early October HealthPocket research reviewed 2014 plan data on Medicare Advantage premiums and maximum out-of-pocket costs as well as Part D premiums. These reports generally showed stable average premium and out-of-pocket costs, but the findings suggest that consumers should fully investigate options because individual plans can change from year to year.

Medicare recently released its data that rate the quality of Medicare Advantage and Part D plans.1 HealthPocket’s review of Medicare Advantage star data indicates that overall star quality is showing measurable improvement from the previous year. Relatively few plans achieve the top five star rating, but plans ranking in the four and 4.5 star categories have increased and the number of plans in the lower rated 2.5 and 3 star categories has decreased.

Medicare’s star program rates plans for managing and maintaining health as well as for customer service.2 The highest score is 5 and those plans achieving a 5 star ranking can be open for enrollment on a year round basis. Evidence shows that higher quality scores increase enrollment in plans,3 so consumers are likely taking note of rankings and factoring them into their purchasing decisions.

Medicare’s star data are organized by plan contract, which can cover more than one state. The data were not weighted by plan market share. The charts below show that the distribution of plans achieving 5 stars will remain at a low 3 percent of all plans. However, 4 and 4.5 star plans, which made up 26 percent of the plans in 2013, will now constitute 35 percent of all plans. On the other side of the quality equation, 2.5 and 3 star plans equaled 42 percent of the plans in 2013 and in 2014 will only amount to 29 percent of plans. 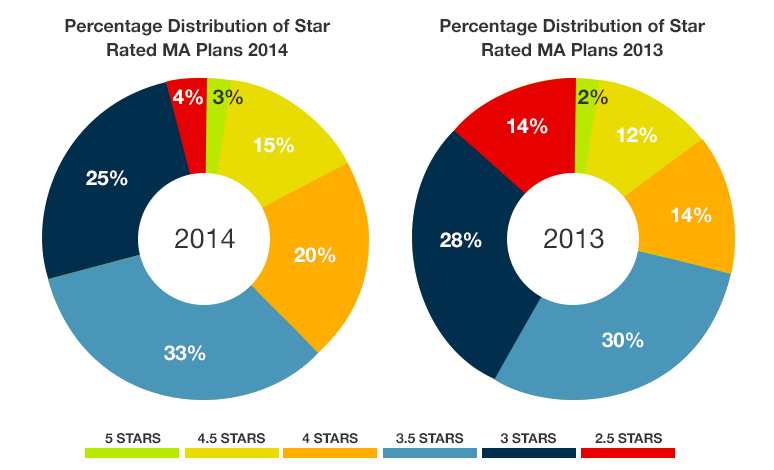 According to information recently presented by a Medicare official, 43 percent of Medicare Advantage enrollees will be in plans rated 4 stars in 2014 while 28 percent are in 4 star plans in 2013.4 HealthPocket wanted to see how the plans of the insurers with the leading Medicare Advantage market share, UnitedHealthcare and Humana,5 performed compared with the industry. The data that makes up the charts that follow are not weighted by enrollment and show that 4 star plans and above make up 19 percent of United’s plan inventory and 36 percent of Humana’s. Within the entire universe of Medicare Advantage plans 38 percent are 4 stars and higher. United had 40 percent of its plans receive 3 stars or lower (only 1 plan was lower at 2.5) and Humana had 14 percent at that level. The industry had 29 percent of plans at 3 stars or lower. 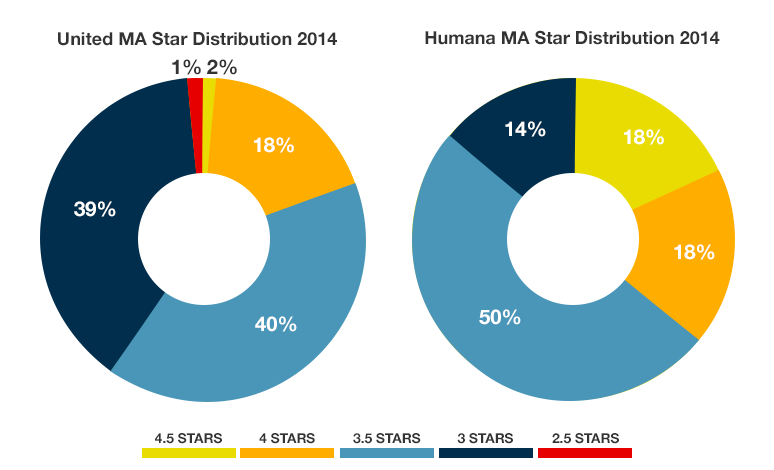 The new star data bring good news for consumers. While there remain few 5 star plans and limited accessibility to them for consumers, Medicare Advantage plans are increasingly scoring at 4 and 4.5 stars. At the same time the distribution of plans in the lower ranking categories is diminishing.

A person’s selection of a specific Medicare Advantage plan is based on a combination of factors including premiums, cost sharing, out-of-pocket maximum and whether a preferred doctor or medical facility is in the plan’s network. Along with these considerations quality ratings are playing an important role in the selection process.

Medicare plan choice should be based on each person’s circumstances. The Medicare annual enrollment period, running from October 15 through December 7 is the time for enrollees to evaluate their preferences and compare how the options available to them meet their objectives. HealthPocket helps consumers in this process by providing a free Medicare comparison tool so they can price and compare options and review quality scores.

Data for 2014 Medicare Advantage star ratings were taken from CMS files, dated October 21, 2013. Plan information was presented by a Medicare Advantage contract identifier and was not adjusted for market share of each plan. A total of 430 plan contracts were analyzed; plans that had no data, not enough information or were listed by CMS as too new to measure were not considered in this research. In 2014 and 2013 one plan contract was rated two stars and in 2013 one plan was rated 1.5 stars and another was rated 1 one star. Those plans were also not included in this study.

Steve Zaleznick, Executive Director for Consumer Strategy and Development at HealthPocket.com, authored this survey analysis. Correspondence regarding this study can be directed to Mr. Zaleznick at steven.zaleznick@healthpocket.com.

Feedback and questions are welcome but given the volume of email, personal responses may not be feasible.