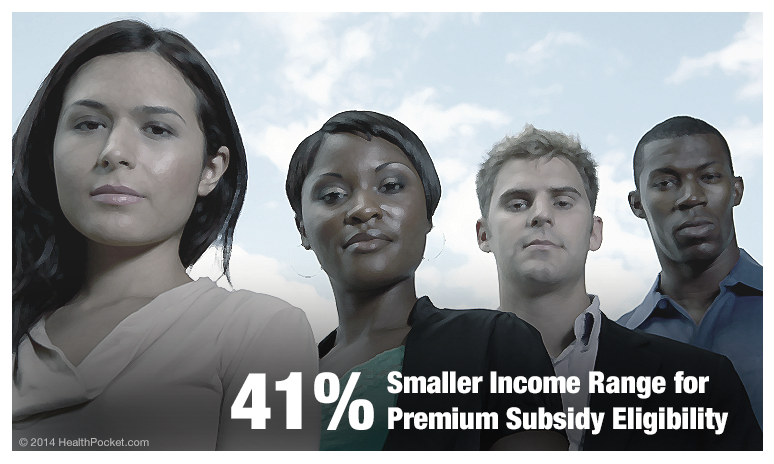 With each update to the Affordable Care Act enrollment numbers, special attention has been paid to the enrollees between the ages of 18 and 34. This age group is enormously important for future insurance premium stability. Young adults tend to use medical services infrequently, which can offset some portion of increased insurance costs that may result from the influx of enrollees with expensive pre-existing conditions. However, only 25% of persons selecting an on-exchange health insurance plan during the first four months of open enrollment were 18 to 34 years old,1 despite this group representing 40% of the uninsured.2 One factor that may have contributed to the under-enrollment of young adults is the relative availability of premium subsidies for this population.

The Affordable Care Act premium tax credits for 2014 plans were designed to lower premium costs for people with household incomes between 100% and 400% of the 2013 Federal Poverty Level ($11,490 to $45,960 per year for an individual).3 However, income is not the only factor that determines whether an individual qualifies for a premium subsidy. The cost of the second least expensive silver plan (called the benchmark silver plan) must also surpass a specific percentage of the enrollee’s monthly income. The higher the income level, the higher the percentage of income that must be surpassed to qualify for a subsidy. If that income percentage is not surpassed by the premium then no subsidy is available for the enrollee. For an individual with the lowest income qualifying for a subsidy, the monthly insurance premium for a benchmark silver plan must exceed 2% of monthly income at 100% Federal Poverty Level, which is approximately $19. In contrast, for individuals with incomes between 300% and 400% of the Federal Poverty Level, the benchmark plan’s monthly premiums must exceed 9.5% of monthly income, which would be from $273 to $364 a month.

HealthPocket examined subsidies for 18 to 34 year-olds in eight major cities across eastern, central, and western United States. In every city examined, young adults under age 35 could not obtain premium subsidies for marketplace health plans within the complete income bracket specified by the Affordable Care Act. On average the maximum income at which young adults could qualify for a premium subsidy was $31,744. This average is $14,216 below the highest subsidy-eligible income stipulated by the Affordable Care Act.

Using premium information for the benchmark Silver Plan in each of the eight cities examined, HealthPocket found that the maximum income that qualified for a premium subsidy varied by $7,709 among the cities. 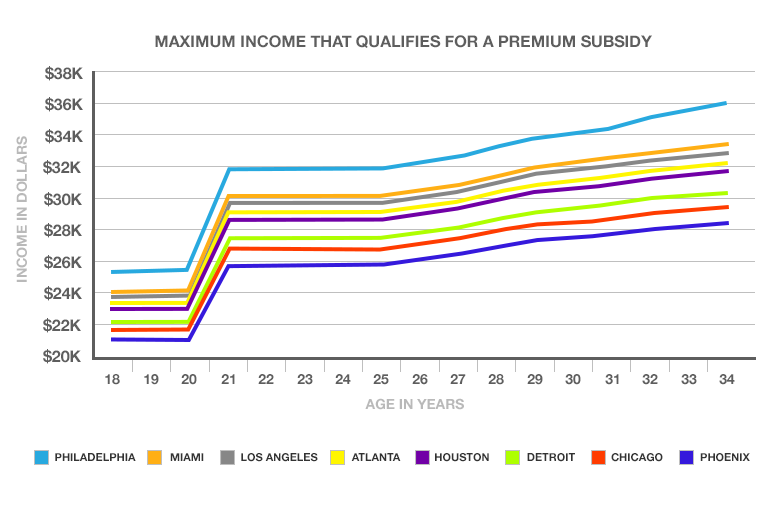 The table below displays the highest subsidy-eligible income at each age from 18 to 34 years old. 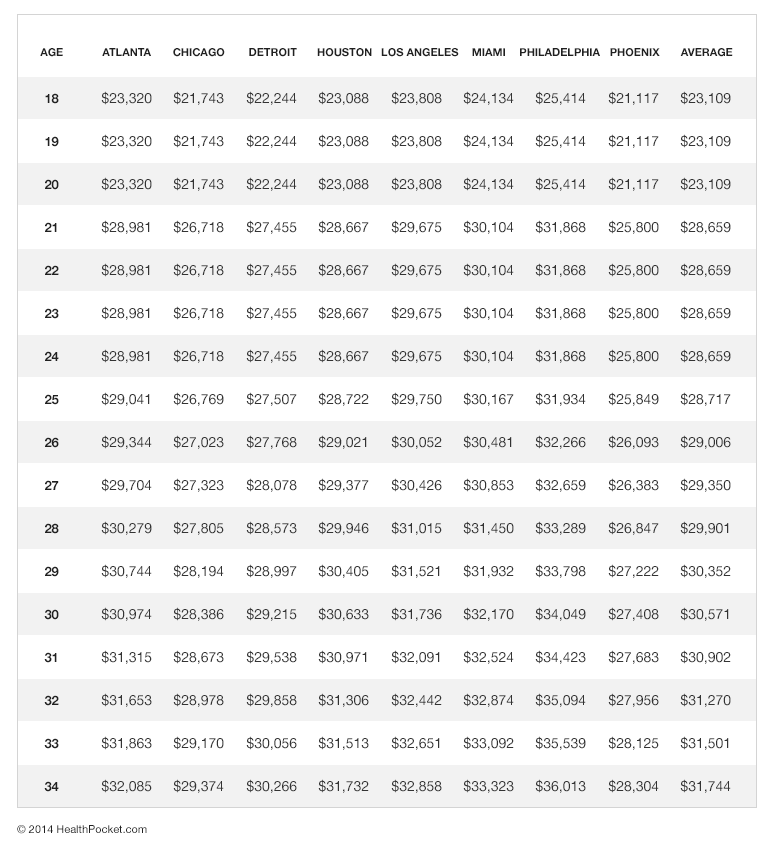 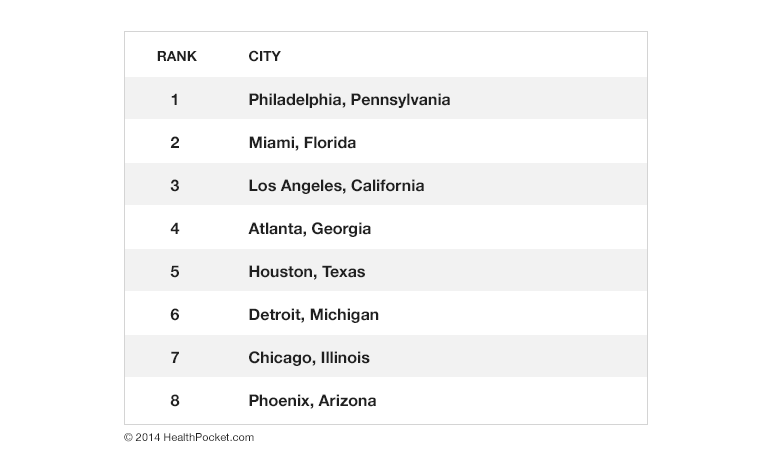 The study of the intersection of incomes and premiums for young adults in 8 cities has revealed what might be termed an Obamacare subsidy gap. This gap, however, is not necessarily a negative condition inasmuch as the absence of a subsidy for an income eligible young adult means that the benchmark premium was not expensive enough to trigger a subsidy. Consequently, the unsubsidized premiums should be evaluated for affordability.

HealthPocket’s analysis suggests that the design of the premium subsidy may have contributed to the under-enrollment of the young adult population, a population targeted for enrollment both for their typically good health as well as their propensity to be uninsured. Other factors may also influence young adult enrollment. For example, the Affordable Care Act allows adult children to enroll on their parent’s health plans until age 26. Additionally, given the statistical prevalence of better health in this age group there may be a lower priority placed on obtaining health insurance. Moreover, the penalty for not having creditable health insurance is $95 or 1% of adjusted gross income. For example a 30 year-old in Houston, Texas making 300% of the Federal Poverty Level faces the choice of a $345 penalty or $1,787 in unsubsidized annual premium costs for the least expensive metal plan in the marketplace.

This means that if a taxpayer purchases the benchmark silver plan, then they will be responsible for paying the lesser of (1) the cost of the plan’s annual premiums or (2) the product of the taxpayer’s household income and their applicable percentage. If the taxpayer purchases a more expensive plan, then they will still receive the same premium subsidy as with the benchmark silver plan. If they purchase a cheaper plan, then they will also receive the same subsidy as long as it does not exceed the premium costs of their plan. If the subsidy exceeds the plan’s premium costs, then the taxpayer pays no premiums for the plan, but they do not receive any extra subsidy beyond that. According to a study by the McKinsey Center for U.S. Health System Reform, 6 to 7 million people across the US were eligible for a zero-net-premium bronze plan in 2014 and about 1 million people were eligible for a zero-net-premium silver plan.11

Premium subsidy calculations were based on the subsidy formula and applicable percentages in the final regulations for the health insurance premium tax credit.12

Subsidies for out-of-pocket costs were not examined in this study. Only monthly premium subsidies were examined.

This analysis was written by Jesse Geneson, data researcher at HealthPocket and Kev Coleman, Head of Research & Data at HealthPocket. Correspondence regarding this study can be directed to Mr. Coleman at kevin.coleman@healthpocket.com.

1 Health Insurance Marketplace: February Enrollment Report. Aspe.hhs.gov (February 12, 2014) https://aspe.hhs.gov/sites/default/files/pdf/177606/ib_2014feb_enrollment.pdf
2 Overview of the Uninsured in the United States: A Summary of the 2011 Current Population Survey. Aspe.hhs.gov (September 2011) http://aspe.hhs.gov/health/reports/2011/cpshealthins2011/ib.shtml
3 Eligibility for premium tax credits in a given year is based on the most recently published set of poverty guidelines at the time of the first day of the annual open enrollment period. Individuals must not have been otherwise eligible for coverage through a government program like Medicaid, Medicare, CHIP, or TRICARE. Federal Poverty Levels cited are for the 48 contiguous states. Alaska and Hawaii have higher Federal Poverty Levels. Questions and Answers on the Premium Tax Credit. (February 3, 2014) https://www.irs.gov/affordable-care-act/individuals-and-families/questions-and-answers-on-the-premium-tax-credit
4 Historical Income Tables: Age – People (Both Sexes Combined) by Median and Mean. http://www.census.gov/data/tables/time-series/demo/income-poverty/historical-income-people.html
5 National Center for Education Statistics. Fast Facts: Income of young adults. http://nces.ed.gov/fastfacts/display.asp?id=77
6 American Fact Finder: Median income in the past 12 months for Philadelphia and Phoenix (in 2012 inflation-adjusted dollars). http://factfinder2.census.gov/faces/nav/jsf/pages/searchresults.xhtml
7 Some states have no premium variation by age or smoking status. New York and Vermont both have no premium variation by age. California, the District of Columbia, Massachusetts, New Jersey, New York, Rhode Island, and Vermont have no premium variation for smoking status. Market Rating Reforms: State Specific Rating Variations. The Center for Consumer Information & Insurance Oversight. (August 9, 2013) http://www.cms.gov/CCIIO/Programs-and-Initiatives/Health-Insurance-Market-Reforms/state-rating.html
8 Center on Budget and Policy Priorities. Premium Tax Credits: Answers to Frequently Asked Questions. (July 2013) http://www.cbpp.org/files/QA-on-Premium-Credits.pdf
9 The household income is the modified adjusted gross income (MAGI) of the enrollee plus the MAGI of any dependents who make enough to file a tax return. MAGI includes adjusted gross income as well as tax-exempt Social Security benefits, tax-exempt interest, and tax-exempt foreign income. What income and household information do I provide when I apply for Marketplace coverage? https://www.healthcare.gov/what-income-and-household-information-do-i-provide-when-i-apply-for-marketplace-coverage/
10 Federal Register, Vol. 77, No. 100. Rules and Regulations. (May 23, 2012) http://www.gpo.gov/fdsys/pkg/FR-2012-05-23/pdf/2012-12421.pdf
11 McKinsey & Company. Exchanges go live: Early trends in exchange dynamics. (October 2013) Copy available at http://health.usnews.com/health-news/health-insurance/articles/2013/12/23/obamacare-insurance-for-0-a-month
12 Federal Register, Vol. 77, No. 100. Rules and Regulations. Page 30391-30392.