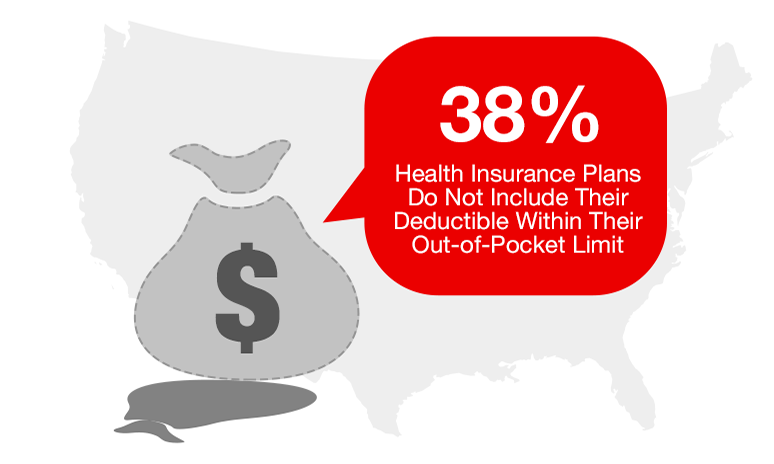 While much of the current discussion of the Affordable Care Act (ACA) focuses on expected premium increases, another important financial dimension remains largely ignored: the limitation of healthcare out-of-pocket costs. Out-of-pocket costs are the portion of healthcare expenses paid by the consumer in the form of deductibles, co-payments, or co-insurance fees. The Bronze Plan and other new ACA health plans limit out-of-pocket spending on an annual basis. Given recent predictions that premiums will rise due to broader ACA benefit requirements and an influx of beneficiaries with pre-existing conditions, a comparison of the ACA’s cap on annual out-of-pocket costs against those of existing health plans offers a broader assessment of the ACA’s financial consequences for consumers. 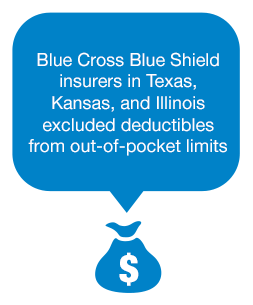 The annual out-of-pocket spending limit for the Bronze Plan and other new ACA plans is $6,250 for individual coverage in 2013.1 HealthPocket compared this amount to the current out-of-pocket limits for 9,752 health insurance plans across the United States to determine the extent to which this new limit represents increased financial protections for the consumer. Our initial analysis revealed that the Bronze Plan’s out-of-pocket limit was lower than 29% of the plans examined. However, further analysis revealed that 38% of the plans did not include the plan’s deductible within their out-of-pocket limit, concealing the full amount a beneficiary could pay annually if the Summary of Benefits wasn’t read carefully.

For some carriers, every plan they offered within a state excluded the deductible from the out-of-pocket limit. For example, well-known Blue Cross Blue Shield organizations in Texas, Kansas, and Illinois were numbered among the insurance companies engaging in this practice.2 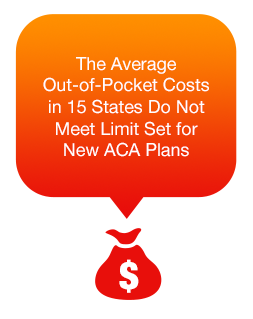 Nationally, only 4% of plans examined had no limits on how much a consumer could pay annually in out-of-pocket spending for healthcare. When there is no annual out-of-pocket limit, a severe medical episode could result in catastrophic expenses even with health insurance coverage. Lab tests, hospitalization, surgery, medication, and rehabilitation could lead to expenses could result in expenses above $100,000 with out-of-pocket expenses on some plans representing 30% or more of these costs.

The national average for out-of-pocket limits was $6,019 when the deductible was included in out-of-pocket costs (plans without limits were excluded). While this nationwide average was slightly below the Bronze Plan standard, individual states did not fair as well. State averages varied from $3,192 to $10,013 with 15 states failing to meet the Affordable Care Act limits. The five states with the highest average limits were at least 28% more expensive than the maximum allowed for the Bronze Plan.

Deductibles included in out-of-pocket limits for all plans 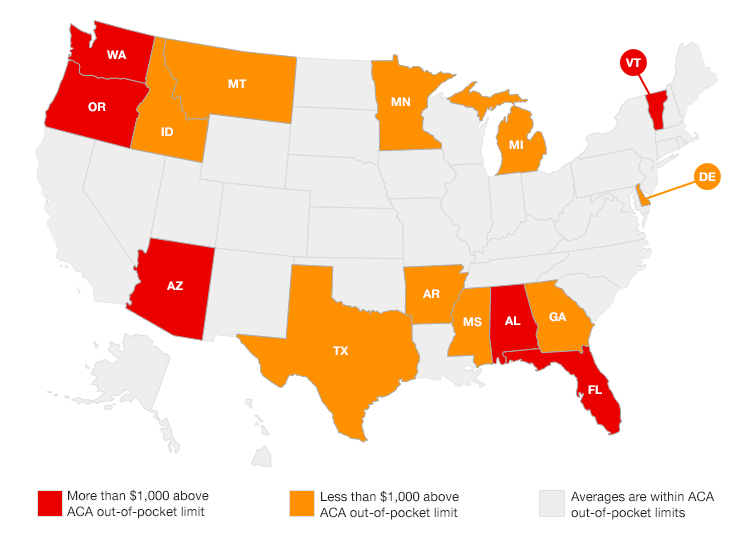 * The Vermont analysis was based on 9 plans available within the government data. One plan with a $100,000 deductible (MVP Health Care ViiP) was excluded to provide a more representative average. When that plan was included, the Vermont average rose to $20,011.

Our analysis has demonstrated that the Affordable Care Act’s cap on out-of-pocket costs will have a highly regional impact, with consumers in states such as Vermont, Washington, Oregon, Alabama, and Florida seeing some of the biggest benefits. While the average out-of-pocket cost nationwide falls within ACA guidelines, this still leaves thousands of health insurance plans that need to improve their out-of-pocket costs for 2014. Moreover, the confusing and prevalent practice of excluding the deductible from the out-of-pocket limit will no longer be allowed under the ACA.

The new out-of-pocket limit for ACA plans should have a disproportionate value to moderate and higher income Americans facing chronic diseases or persistent poor health since this group is most likely to reach the annual limit.3 Individuals who experience a severe health event such as a stroke or heart attack also stand to benefit most from the ACA’s new protections. Additionally, the broader array of standard coverage (cf. Essential Health Benefits) required of the Bronze Plan and other new ACA health plans may also further reduce healthcare out-of-pocket costs for consumers.

Results of the study were based on an analysis of 9,752 health insurance plans for individuals and families under the age of 65. Plans from the Medicare, Medicaid, and employer-based health insurance markets were not included within this study. The data used in this study was obtained from insurance records made public by the Department of Health & Human Services. The data was collected on January 31, 2013. In isolated instances missing plan attributes were collected from an insurance company’s web site. All analysis assumes the accuracy of the underlying government data. While every effort was made towards a comprehensive collection of plans, HealthPocket makes no representation that every plan within the individual insurance market or in an individual state was included in this study. Statistics are not weighted by plan enrollment. Percentages are rounded according to standard industry practices.

HealthPocket.com is a free website that compares and ranks all health plans available to an individual, family, or employer in a given area, at once. The company uses only objective data from government, non-profit, and private sources that carry no conditions that might restrict the site from serving as an unbiased resource for consumers. The founders of HealthPocket.com spent decades pioneering online access to health insurance information and knew they could offer something different that can positively change how people use healthcare in the United States. Learn more at www.HealthPocket.com.