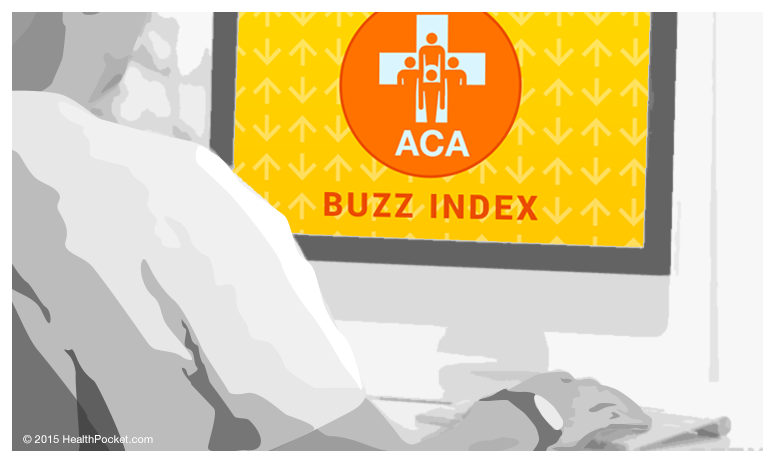 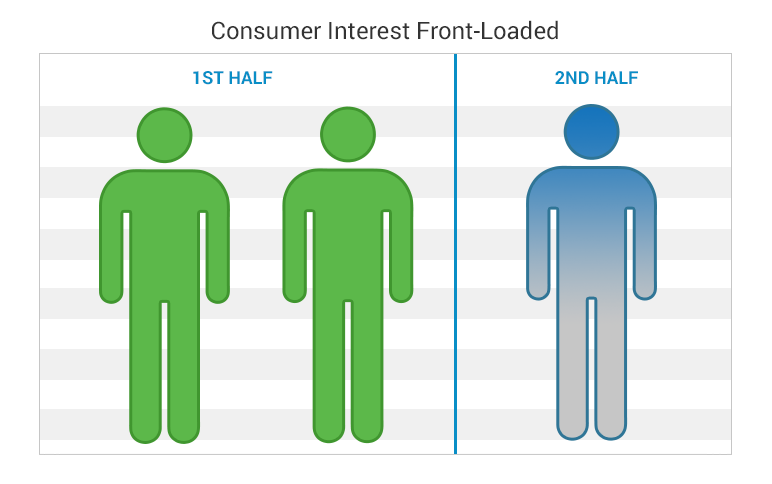 Unsurprisingly, enrollment behavior has also evidenced a ‘front-loading’ this year. As illustrated in the government chart2 below, the first half of the enrollment period (through December 31, 2014) had approximately six million enrollees for the federal exchange, Healthcare.gov. 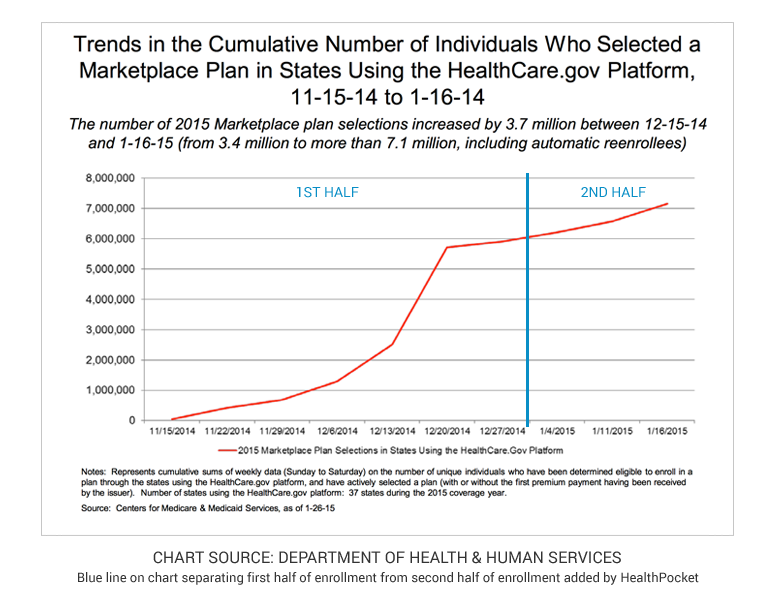 By early February, the number of Healthcare.gov enrollees had only risen to 7.5 million according to Sylvia Burwell, secretary of Health and Human Services.3

Why Is Consumer Behavior Changing?

This year’s enrollment period is quite different than last year’s. Aside from being only half as long as the 2014 enrollment period,4 there are two more significant factors that affect consumer interest activity and enrollment behaviors in 2015.

The first of these factors is “auto-enrollment.” For the 2015 enrollment season, the government automatically re-enrolls Healthcare.gov consumers in the same Affordable Care Act plans they had purchased in 2014. This auto-enrollment will also continue premium subsidies at the same levels as the prior coverage period.5

The effect of auto-enrollment on consumers who purchase their own insurance is likely significant. The government has reported that only 42% of enrollees this season were ‘first time’ insurance buyers on Healthcare.gov.6 The remaining 58% had previously purchased insurance on Healthcare.gov and been auto-enrolled or actively re-enrolled on their own.7 Government officials predicted last June that the vast majority of 2014 federal exchange enrollees would be automatically re-enrolled for 2015.8

The second major factor changing consumer interest activity and enrollment behavior this year is the technical stability of exchanges as compared to 2014. Last year’s launch of both federal and state health insurance exchanges was marked by prolonged system problems that interfered with consumers’ ability to shop and enroll. Without these technical problems, 2015 people interested in purchasing their own health insurance are able to compare plans and submit health insurance applications without the need to repeatedly return to exchange web sites due to prior system failures.

Should The Annual Enrollment Period for Obamacare Be Shortened?

At this time, the government has not yet announced the final enrollment numbers for the 2015 annual enrollment period. While government exchanges are expected to report a spike in enrollment activity in February as the enrollment period drew to a close, that spike is not expected to be of a magnitude to change the general front-loading trend noted in this publication. Consequently, the front-loading trend can be used as the basis for a refinement of the government’s proposal for shortening the annual period for 2016.

The suggested reduction of the enrollment period to 54 days could also be combined with a change in start date to avoid the current overlap of the Affordable Care Act and Medicare enrollment periods. A move of Affordable Care Act enrollments to tax season would lessen the call center congestion at insurance companies that results from Obamacare calls coming at the same time as Medicare calls. The move of the Affordable Care Act enrollment period to tax season would also assist consumers in making the most informed health plan choice. The tax season is the period when consumers would presumably learn if any portion of last year’s subsidies must be repaid, if changes in income affect the level of health insurance subsidization, the amount of the uninsured penalty for those without an exemption regarding minimum essential coverage, etc. This information could help consumers make the wisest health plan choices for their personal circumstances.