The Future of HealthCare: 6 Reasons Not to Fear the Robot Revolution

The Future of HealthCare: 6 Reasons Not to Fear the Robot Revolution 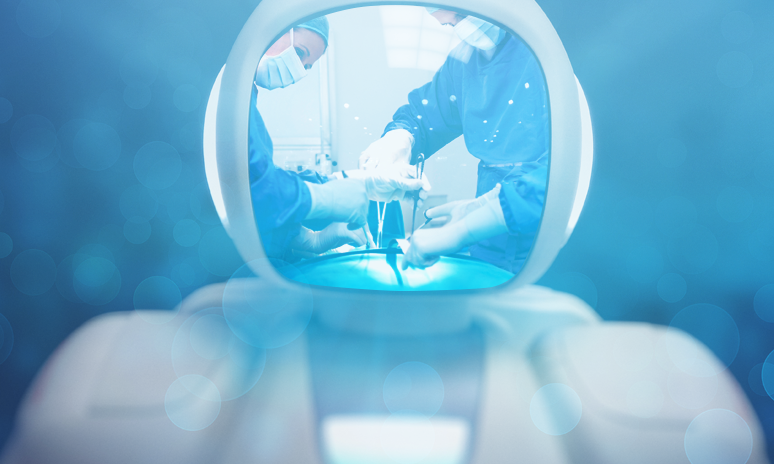 We’ve been hearing about robots for decades. The robots are going to take over. This is something that’s been in the works for a long time now; anyone who’s ever seen a Terminator movie knows the scenario. A world run by advanced sentient machines, humans rendered obsolete and reduced to slaves of their own creation. First, man controls machine. Then, machine controls man.

What will happen when the robots gain artificial intelligence and take total control? What would this mean for our healthcare?

Thankfully we live in a different reality. The notion that an impending robot revolution is something you should be scared of is simply a product of creative writers and movie magic. The world we live in today is one where humans build and design machines which fulfill a need or perform a task more efficiently through automation….and there’s nothing sinister about it.

Since first experimenting with the concept way back in the early days of robotics, the technology has progressed by leaps and bounds. Robots have now become an integrated part of just about every industry imaginable. One of the most fascinating areas where robotics have become integral is the medical field. Robotic technology now is being used to assist in surgery, rehabilitation, medical transportation, sanitation, prescription dispensing systems, and more.

We’re entering a future where traditional medical positions such as doctors, nurses, receptionists, and surgeons are being assisted (or replaced) by robots. Robotics have disrupted the entire medical landscape, and things are just getting started. For anyone who worries about how this will affect your healthcare, here are six reasons why there is nothing to fear.

1. The future is already here

In case you haven’t been paying attention, robots have been in the medical field for quite a while now. The FDA approved the first robotic device which could perform surgical procedures back in 2000. There’s video of the da Vinci Surgical System operating on a grape which demonstrates the astonishing precision made possible by the tiny robot. Using a remote control system, the surgeon can program the robotic device to perform minimally invasive procedures which are too small for human hands. It can also assist with cardiac, colorectal, gynecological, head, neck, thoracic, urological, and other general surgeries.

Companies like Boston Dynamics have been at the forefront of building better robots for years. Their motto is in fact, “changing your idea of what robots can do”, and their models certainly do not disappoint. The latest line of robots at Boston Dynamics include Atlas, “the world’s most dynamic humanoid”, which has 28 joints and can stay balanced if bumped around or pushed. If it does get tipped over, Atlas will get back up and resume its work just like the magic brooms in Disney’s Fantasia.

No one said change is easy. With the healthcare industry however, the transition to automating certain human tasks has been gradual. No one’s complaining because robots are actually more effective at routine medical tasks. They always perform at peak performance levels, and faster than their human peers. For example, a robot can draw blood from a patient in 1 minute instead of the average 3-5 minutes it takes a human. Using robots can reduce patient expenses and wait times, resulting in a less stressful patient experience.

Other procedures than were previously painful and cumbersome such as endoscopies can be greatly improved with the use of tiny robots. Instead of inserting a camera on a wire into a patient, there’s a pill-sized robot you can swallow which will travel along your digestive tract and gather data for diagnosing. Progress!

Robots are also being used in hospitals to transport dangerous and/or life saving materials. This decreases the risk of contaminant or workers being exposed to hazardous chemicals and other medical waste. Robots can also disinfect a room far more efficient than a human, marking a huge advancement in medical sterilization.

Ever since cars were invented, there’s been people working to build, repair, design, sell, insure, and all kinds of other things relating to them. The same can be said in this case. Wherever there’s a robot, there’s a team of dedicated people that were paid to make sure it works. Another team of people were paid to get the word out about the robot (Marketing), others were paid to sell the robot (Sales), and another group was paid to answer any questions people had about the robot (Customer Service).

That’s a lot of jobs for every robot that’s produced, and there’s even more if you include other industries potentially affected by a robot business: construction, landscaping, custodial, catering, office supplies, etc. A thriving robot industry is great for the economy.

Robots are not taking away our jobs, they’re freeing us from doing dull and dangerous tasks. They’re also helping us in ways that can be lifesaving. Robots in medical facilities make it possible to manage much larger numbers of patients, providing greater qualities of care than previously possible. It’s not about replacing medical jobs with robots, but instead using robotic technology to improve the effectiveness of treating patients.

There will always be a need for certain jobs that require a human touch. Although impressive and highly skilled, robots are inferior when it comes to using empathy, creative thinking, artistic talents, and other unique human qualities. If you’re worried about job being replaced by a robot, focus on what skills you have and find something that the robots can’t do. For example, you could have a new career repairing robots, or designing a better one.

4. Robots will help us live longer

Robotic technology has led to amazing advances in the medical field which can benefit our health. Conditions like prostate cancer can now be treated by nanorobots which perform microscopic surgeries with flawless precision. People who were once paralyzed can walk again through innovations in robotic exoskeletons. By analyzing large amounts of data, robot computers can predict when and where infectious disease outbreaks will occur. There’s even tiny robots that can go into your blood and remove bacterial infections.

Biometrics has also been forever transformed by robotic technology. This is especially helpful for elderly people who have a hard time physically leaving the house. “Care Robots”, “Personal Healthcare Bots”, and other devices can monitor a patient’s physical condition (or mood in some cases) from their own home, and send important information securely back to the doctor.

Robots that monitor biometrics from our home (or as wearable sensors) can diagnosis conditions and make suggestions for healthier lives. Early warning signs of serious ailments can be automatically sent to your doctor who can follow up with a personalized treatment plan. Any troubling activity can alert the facility that the patient needs immediate care, and send an ambulance if necessary.

The more we learn what’s possible, the more we’ll be able to invent robot technology that can improve our lives, making us healthier, happier, and live longer.

It’s not up for debate that there’s a lot of waste in the medical industry. Using automated robots, medical facilities can help improve efficiency and reduce costs by streamlining services. Because there’s no need to pay the robots (beyond initial cost and repair), the facility saves money which can be passed along to the patient.

Robots can assist in everything from patient intake to surgery. Instead of waiting to fill out paperwork, hospitals in Belgium are using human-like robots as medical receptionists which can greatly reduce administrative costs and paperwork.

Hospitals across the world use Automatic Guided Vehicles, which transport medical materials securely to different parts of the building. Although it takes initial investment from the facility of around $100,000, AGVs become more profitable each year. They save the facility money on employee labor costs, which can decrease their insurance costs because they’ve eliminated risky jobs. It can also reduce utility costs such as heating and cooling for the facility, and increase inventory efficiency and accuracy.

With more numbers of robots being made available to hospitals across the county, the cost to produce them has gone down. Investing in robots will be a pillar of successful hospitals in the future, and the cost saving potential is huge.

6. There are endless possibilities

With new milestones being made each year, the medical field is still discovering everything that’s possible with the use of robots. Nanotechnology has many exciting potential uses for our health when combined with robotics. Leading researcher on the subject Ray Kurzweil says that the tiny technology has the ability to rebuild “molecule by molecule, our bodies and brains and the world in which we live.” Imagine being able to regenerate body parts and internal functions through the use of tiny robots working inside the patient. It’s certainly possible, and more likely to become the norm as robots become more affordable throughout the medical industry.

Robots will never be able to replace medical workers entirely however, and it is important to keep our priorities in check. Are we humanizing robots in a way that's not entirely appropriate? Are we creating enough new jobs for all the tasks now being automated through robotics? We are definitely in a transition time toward the future.

There’s nothing to fear about this future however, especially since there are so many benefits that robotics potentially bring. As long as we don’t forget the intrinsic value that a real human can bring to a medical situation, we can work harmoniously with robots to deliver a better patient experience.